What we can talk about, however, is the franchise.

Indeed, the culling of the vast majority of “known” characters has made what was once a prohibitively enormous task—determining the real demographics of all extant SW material—into a relatively feasible one.

For my part, of course, I’m not so much interested in the detailed demography (though if anyone wants to get on that, hey, drop me a line) as I am my long-running system of Diversity Scores. A comprehensive explanation of Diversity Scoring as it’s existed up to now can be found here, but in short: beginning with a carefully-selected list of a story’s primary characters (or in a few cases, every character), I count the number of characters who are anything other than a Straight White Human Male, 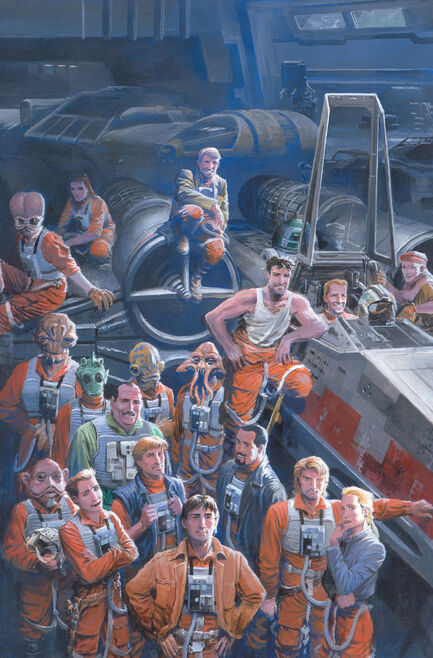 and whatever percentage of the total character list I end up with is that story’s score. If a book’s Dramatis Personae contains ten characters, and four of them are WHMs (as I call them for short), then that book’s Diversity Score is 60.

I should note here that Diversity Scoring isn’t meant to be an absolute judgment of a story’s merit; much like the Bechdel Test, it discounts a lot of other important factors and is meant mostly as a means of gauging broad trends and starting conversations. A good book can have a low score (see Kenobi‘s 50), just as easily as the opposite (The Cestus Deception‘s 80).

Anyway, the average score out of the dozens of stories myself and others have analyzed over the years is about 67—meaning that it can reasonably be claimed that among the hundred-plus novels making up what’s now regarded as the Legends universe, one out of every three characters is a Straight, White, Human, Man. The word “straight”, by the way, is pretty much superfluous in there, because only two existing SW characters, give or take a Juhani, have ever been definitively LGBTQ.

But the good news is, all that is meaningless now! Star Wars Canon with a capital “C” is at this moment populated solely by the casts of the six films and the TV series The Clone Wars—and it will remain that way until the Star Wars Rebels material starts rolling out this summer. While up to now, I’ve been content to focus on the novels and leave the films’ diversity standards to my own educated assumptions, I now find them to be a relatively simple task. The Expanded Universe tells me, for example, that WHM Tycho Celchu is flying one of the two A-wings seen accompanying Lando into the second Death Star, but his ass ain’t in the credits—so he’s outta there.

What that leaves me with, then, is basically just those very credits. There’s always going to be a cutoff somewhere—I can hardly count every person at the Yavin award ceremony (or determine their demographics, for that matter), but if someone’s important enough to be in the cast list—even as “Gold Two” or “Commander #1”—I’m pretty comfortable including them in what is ostensibly an exhaustive character list.

So, starting with the cast lists included on each film’s Wookieepedia page (because I was at work and couldn’t exactly put the movies on), I have begun the process of scoring the complete casts of every SW film. To demonstrate just how simple this was, this morning I arrived at six preliminary scores in fairly short order (I say preliminary because I am going to double-check the actual films in the near future just to be sure—keep an eye on this discussion thread for updates), and then figured what the hell, I’ll do this huge list of all named The Clone Wars characters as well. A couple hours later, here’s where I ended up: 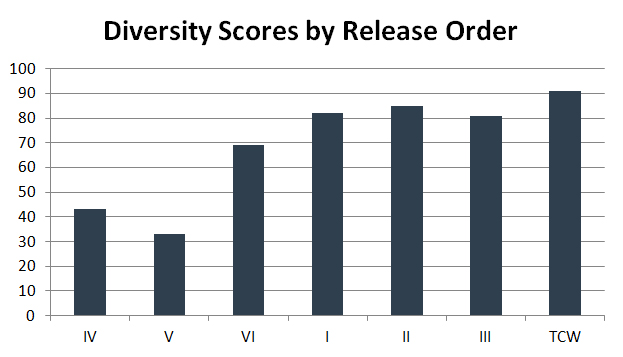 I decided to work in release order rather than chronological order because this kind of operation is a measure of the times we live in as much as anything else, and I think it’s instructive to keep that in mind, lest we judge 1977 by 2014 standards. Anyway, as you can plainly see, my tentative numbers show a pretty steady increase from the OT to the PT and into TCW. The biggest divergence is, perhaps surprisingly, The Empire Strikes Back; offhand, I have to assume that this is due to the fact that both A New Hope and Return of the Jedi feature big “crazy alien” set pieces, while Empire is remarkably low on aliens and is mostly notable for its trip to the planet of the black people.

I expected The Clone Wars to do pretty well, since a character model of a Phindian is no more costly to produce than that of a human (budget: another factor not to be discounted), but after compiling my exhaustive list of 327 named characters (unlike the films, here I didn’t include things like Guard #2), I was very pleasantly surprised to end up with only 30 WHMs—ten of which were preexisting movie characters. TCW’s unified score of 91 is even more impressive when compared to the average film score of 66; I suspect that a unified list of all movie characters would be roughly the same size as TCW’s, so giving each equal weight arrives at a (very) rough average Star Wars Canon Diversity Score of 79—meaning one WHM for every five characters. Compared to my Legends numbers, that’s not a horrible place to be.

So, going forward, diversity in Star Wars is looking pretty good, right? Well, not exactly. That 79, even if it holds up to extended scrutiny, should be regarded as nothing more than a baseline. The “sins” of the originals have been leavened by the bolder strides of the prequel era and beyond, but all that can give us is a reasonable “fail” line—the franchise from now on should at bare minimum do no worse than this.

But not failing isn’t the same as succeeding. What does Star Wars in the Disney Era need to do to succeed? Well, the announced cast of Episode VII isn’t the best start. Personally, I’m not quite ready to decry the whole thing just yet, but even knowing absolutely nothing about the actual movie, it’s very hard to imagine that a couple more of the new characters couldn’t have been female. I’m sure Max von Sydow and Oscar Isaac will do a great job, but is there utterly no way those roles could’ve gone to Angelica Huston and Rosario Dawson? Only time will tell.

And last but not least, there’s the matter of those two gay characters. The married Mandalorian men Goran Beviin and Medrit Vasur first appeared about seven years ago in the Legacy of the Force series, and were pretty much the most unassuming couple o’ queers you could ever imagine; their homosexuality is handled so matter-of-factly in the text that many people didn’t even notice it until it was pointed out to them by other fans. For many of us, they were a win not just because they existed, but because of how banal they were—they were a gauntlet thrown down to every fan who’d ever claimed that they didn’t mind gay characters, so long as they weren’t “shoved down our throats”. Their words, not mine.

No, it was hard to oppose Goran and Medrit unless you were, y’know, opposed to them. Their significance has only been underlined by the lack of any other LGBTQ characters showing up since they left the stage—and now, we don’t even have them anymore. Star Wars’ Diversity Score may have gone up with the reboot, but its LGBTQ score just went back down to zero.

Lucasfilm, you have work to do.

9 thoughts to “No Gays in Space: Diversity and the Changing Faces of Star Wars Canon”