To answer this, one must first gather some basic information. For example, how big is the world in question? In the episode, the surface where the Protectors’ camp is located seems to match what we see of this bigger object from space. And if we assume that it is, we can tell that it has quite an Earth-like gravity (although lower gravity in Star Wars is typically represented like this, too), a comfortable atmosphere with clouds, landscapes that don’t seem so bad harboring what look like rivers or lakes, and an intact half that looks very much like a semisphere. Taking all that into account, I’d say this world is somewhere between the sizes of Mars and Earth (6,000 to 12,000 km in diameter). This is important because size and roundness are related when it comes to planets—If you make a list of all the objects in our solar system, you’ll see that everything with a size of 1,000 kilometers and up is round, no matter how violent its past. The biggest impact basins are no more than a few kilometers deep. Even the Earth is the result of the collision of two planet-sized objects that merged to form a bigger one, and we wouldn’t know if it wasn’t for the fact that this is how the Moon came to exist.

So what is it that makes a planet round and also go back to roundness after a cataclysm? The answer is called hydrostatic equilibrium. It’s the same thing that makes you unable to create a hole that lasts more than a second in the water of a swimming pool. If you push the surface of the water up from below as compared to where it would be if the pool were undisturbed, gravity will make it go down. If you push it down, pressure inside the water will make it go up. Planets are so big and their inner pressures so high that you have to think of them as a fluid, but this time the gravity at the surface is pointing towards the center of mass of the bulk of their material. So for all the points of the planet surface to be at the same height, in equilibrium between the inner pressure and gravity, it will acquire the shape of a sphere (or an ellipsoid if it spins). Indeed, given enough time, the jagged edges of that huge crater will crumble, the mass will redistribute, and the third moon of the Concord Dawn system will become round again.

But the dialogue in the episode seem to imply that the state of the system is due to at least one of almost a hundred wars, and for that to be in recorded history it means that the cataclysm had to have happened several thousand years ago at most. Leaving it as “it’ll happen eventually” doesn’t solve our problem. How much time then is enough time? This is a trickier question, because it also depends on unknown parameters like the internal composition, temperature, and so on, so I decided to ask my geologist friend Nahúm Méndez Chazarra for help. We can imagine two different scenarios here. In the first one, we will assume that this world is analogous to Earth, with a dense core, a mantle that can flow (even though it’s mostly solid), and a rigid crust on top. Once that big portion of the planet is gone, we would expect the exposed section of the mantle to start melting where its temperature is more than about 1,000 °C, because it won’t have all that pressure on top keeping the material solid despite the heat. The mantle would start flowing towards the center of the hole, dragging with it the crust that’s closer to the rim, which would fracture along fault lines and separate in smaller plates. This doesn’t look at all like what we see in Concord Dawn, but it’s precisely what seems to be going on at Lola Sayu, the planet with the infamous prison known as the Citadel. Who would have thought!

Going back to Concord Dawn, however, we find ourselves in need of the second scenario. There is no glow in the hole that would indicate molten rock or very high temperatures, so we might assume (and a sun redder than ours, as seen in the episode, makes this possible) that the world is geologically dead, with no convection currents or a flowing core and mantle. Solid rock through and through. Mind you, in this case the material would still tend to move to achieve hydrostatic equilibrium, but now it might take even longer. If the mechanism that created the hole didn’t melt things a great deal—and it did not, or else the bigger fragments that can be seen would have ended up as spheres—then only erosion and structures collapsing under their own weight will participate in the process. So how long would it take? Well, there are steep cliffs on Mars and big lava tubes on the Moon that have stood for billions of years. The rim of that crater might take millions of years to crumble. Even the jagged edges could be the result of the weaker spots having already dislodged and fallen towards the center (causing megaquakes when they reach the bottom). The artists seem to have done a good job after all.

But our analysis is not yet finished. What happens to the atmosphere, for instance? Since a gas also expands sideways and a climate system has wind, surely the air would end up falling into the crater in a few days at most? Indeed, a part of it would end there. But as can be seen in the image, a big portion of this world is gone. The new center of mass is not anymore where the center of the sphere used to be, but displaced towards the surface of the intact hemisphere. This means that gravity won’t point straight towards the floor in most places, but a bit to one side. Things will always fall slightly towards the center of the hemisphere, opposite to the center of the crater, and only here gravity would point straight “down”. The atmosphere, once evenly distributed around the globe, will be dragged by its own weight towards that location, where it ends up being denser, and it would get thinner as you approach the crater rim until you’re almost in a vacuum, or in a tenuous windy landscape where the air flows into the abyss to end up cascading down at the crater. The clouds would also follow this air, and would not remain encircling the hole as if the land was still there, forming an empty shell like the image seems to suggest. And the same would happen with the rocks that are so close to the jagged edge that the world casts shadows on them—they would either fall down pretty quickly, or they’re just flying by quite fast, deflected by the world on a new trajectory after a near-collision. 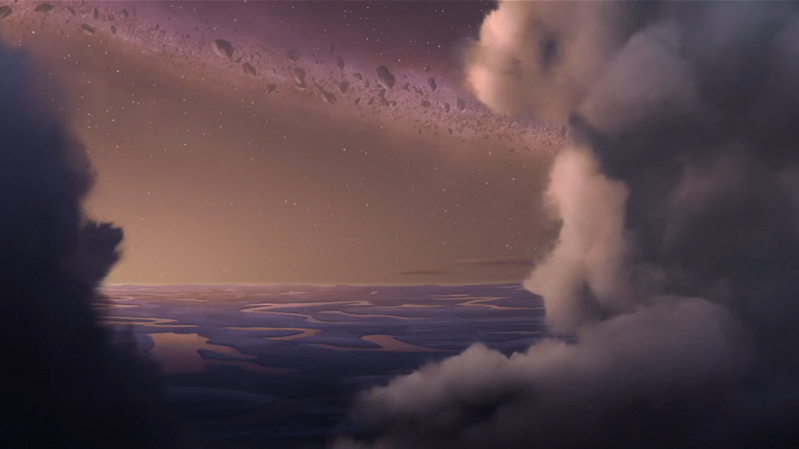 It is the amount of rocks and planetary fragments that can be seen in the background what concerns me the most. This world is said to be a moon, probably of an unseen giant planet, and so the rocks will probably form a ring in a similar orbit (good job on the blue color of this ring, by the way. If the gas and dust particles are small enough they will scatter blue light like that). If this is the case, however, the world is at risk of extinction-level meteorite impacts on a regular basis. We still don’t know what kind of superweapons were used in wars at the time of the Old Republic, but even if when the cataclysm happened the moon and the cloud of fragments were flung out in opposite directions, celestial mechanics work in such a way that the new orbits of both would cross at the point where the event took place. A bombardment of rocks several hundred kilometers wide, each moving at a few kilometers per second will not leave the intact hemisphere we see in the image, but rather a cratered hellscape with maybe not much trace of an atmosphere. But perhaps the weapon worked more slowly, disintegrating the moon bit by bit as the world moved along its orbit, changing its speed each time a fragment was flung out, leaving it in a final trajectory that wouldn’t be in the path of most of these objects. Or perhaps, after the cataclysm, the Protectors honored their name and saved this world with a fleet of ships by pushing the worst of the rocks away with their ion engines and tractor beams. There could certainly be an epic story there, waiting to be told.

And that is the beauty of applying our scientific knowledge to what is seen in a work of fiction. As you work through what would happen, taking the images and text as evidence, you can always reveal unexpected consequences that might potentially enhance the story. My goal when I set out to write this piece was never to conclude “well, that wouldn’t happen” and leave it at that. As far as the characters are concerned, in the world where they live, these things did happen. So a better question is, then, what would it take for that to happen. And once this approach is taken, everything becomes more interesting. Rather than considering them mistakes, the elements that you would consider impossible allow you to glimpse a part of the story that had remained untold. This is, in fact, what we do in science when faced with such anomalies if the experiment worked as it should.

If you enjoyed this piece, I might end up writing more in the future. But in the meantime, I can be found online as DarkSapiens. Feel free to ask me any questions that you might have.