One of the major recurring topics of Star Wars fandom over the last few years has been the notion that this is, in some fundamental way, a movie franchise. At face value that may seem obvious, but there’s more to it than there might seem right away. For a lot of fans, especially nineties kids like myself, far more of our formative years was spent reading Star Wars books, comics, Essential Guides, and so on than watching the films. Even once the prequel trilogy was coming out, and causing occasional headaches for the Expanded Universe, there was always an understanding that the film aspect of the franchise was not just finite but distinctly limited—they were a storm we just had to weather before the EU took over again. Just like there was never going to be an Episode VII, nor would there be a III.V, or a Zero, or a Negative Twenty. The films were Anakin’s life story, and if that wasn’t the major draw for you, no big deal. If you liked harder military science fiction, Star Wars was a novel franchise about the continuing war with the Empire. If you liked Jedi melodrama, the comics of John Ostrander and Jan Duursema were your Star Wars. If you were a gamer, Star Wars was Dark Forces or X-Wing Alliance or The Force Unleashed.

And yeah, one of the coolest things about it was that all those different pocket universes intersected and fed off of each other—at least in theory—so even if you mostly kept in one or two lanes yourself you still got to feel like part of this grand tapestry of SW fandom. Things are different now, and frankly I don’t blame some people for still not being okay with that, but it is what it is. Movies are once again steering the ship, and will be for the foreseeable future no matter what part of the timeline you’re into; that doesn’t ruin Star Wars, in my opinion, but it does necessitate a degree of realignment. What role should supplemental material—which is what the books are now, supplements—play in a movies-first franchise? What role can they play best?

For my money, even in the heyday of the EU, the best books tended to be ones that didn’t heavily involve the film characters. One of my favorites was I, Jedi, which not only focused on X-wing pilot-turned-Jedi trainee Corran Horn, but went so far as to weave in and out of the cracks in the Luke/Han/Leia-focused Jedi Academy Trilogy. I liked Shadows of the Empire for similar reasons—while it was a Big Three story itself (well, Big Two and Dash Rendar), I enjoyed the way it threaded together The Empire Strikes Back and Return of the Jedi while still finding its own story to tell by staying largely behind the scenes of the Empire/Rebellion conflict. I liked the Thrawn trilogy as much as anybody (and the New Jedi Order perhaps more than most), but it seems to me that a lot of the best character arcs in the EU were those that had nothing to do with the Big Three, because they were the most free to have character arcs. The Big Three not only couldn’t die, but couldn’t really change much as the decades wore on; they became wiser, I suppose, but largely from learning hard lesson after hard lesson as new horrible things continued happening all around them.

Compare that to Corran Horn, who as I mentioned started as a brash fighter pilot who knew nothing of the Force and ended up as a compassionate Jedi Master with a beloved family. Or to Etain Tur-Mukan, another Jedi who chose to start a family, but because she was born in the wrong era, sacrificed everything for that decision. Think also about Annileen Calwell, hardscrabble Tatooine shopkeeper, and Joram Kithe, timid Republic accountant, and Force-weak Jedi initiate Scout, surviving through sheer cunning. These stories aren’t inherently better than the Big Three’s, but they generally made for better prose than the Big Three did—because things were able to happen to them.

Let’s go back to Annileen Calwell, from Kenobi—the first novel release covered by this site. Leaving aside the ostensible threat of young Luke being discovered, Kenobi had some of the lowest stakes in Star Wars novel history. In a galaxy-sized civilization, Kenobi was the story of one neighborhood. Not a stellar neighborhood, a literal neighborhood. Obi-Wan was the selling point, but the story was about his effect on his neighbors rather than about him personally—because, again, nothing about Obi could really change. You might speculate that, going forward, if you’re going to use a major film character in a novel, this would be the smartest way to do it, because anything of real consequence that happens to Luke Skywalker is going to be in a movie. I do think this was a big problem with last year’s Heir to the Jedi; it was a good enough story, and competently told, there was just nothing to it. By the epic standards of Luke Skywalker’s life story, it was a book about going to the store to pick up a gallon of milk. I don’t think that’s an argument for a better-written book, I think it’s an argument against the story having existed at all.

But that brings us to Bloodline—the first true “Big Three novel” since HttJ. This time, thanks to The Force Awakens, it’s not just “Leia goes on a mission”. It’s got a real reason to exist. In truth, just because the movies are in charge doesn’t mean they’re able to show us every single important thing that happens to the main characters, and so ironically, we now find ourselves in a position where a novel can give us one of the most pivotal moments of Leia Organa’s life—her breaking with the New Republic and founding the Resistance. Nothing she did in the EU was half as big as that, and it’s happening in a book.

So the ideal path forward, then, is twofold. As the sequel films continue rolling along, certain peripheral events will come along that are well-suited to novels. In addition to Bloodline, the second Aftermath book looks to revolve around Han and Chewbacca’s efforts to liberate Kashyyyk. While I hope (and expect) that Aftermath‘s original band of misfits will remain a large part of the story, this too is a pivotal moment in Han’s life, possibly even the beginnings of his own break with the New Republic command structure, considering he initially 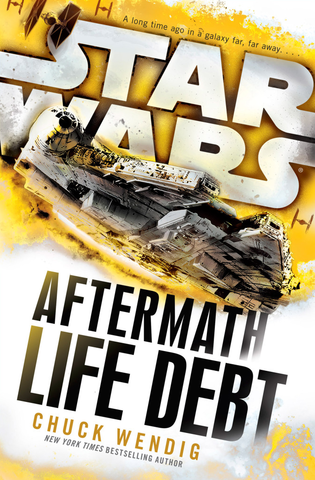 heads to Kashyyyk against orders. Maybe once Episode IX is out and we have the full backstory of Snoke and Kylo Ren, the time will come for a novel about Luke’s first class of Jedi students. Again, pretty damned consequential—in all of these stories, the Big Three are transitioning from one stage of their lives to another. By defining an end point, the films have paradoxically allowed for real evolution to take place elsewhere.

But that doesn’t mean nothing truly unpredictable can happen in novels anymore; there also remains lots of ground for stories about original characters. Think about how much conversation there’s been around the fates of the cast of Star Wars Rebels, in particular Kanan, Ezra, and Ahsoka, because the show has wisely stayed on the margins of the Empire. We know that Ahsoka isn’t going to turn Darth Vader back to the light side, and Kanan isn’t going to defeat the Empire single-handedly, but on the whole, we really have no idea what’s going to happen to them. So would it be with any novel not focused primarily on the SkySolos.

But what I’d rather not see from now on is “Luke/Han/Leia go on a mission” novels. Those kind of stories can be well done, and add nice character detail, but as the EU demonstrated, they can pile up very, very quickly—and the more there are, the less of an impression any one of them can make. One of the smartest priorities put forward by Story Group lately has been to not just fill in gaps because they’re there, but rather to look for where the most story potential exists. Hundreds of stories were told about the Big Three in Legends, enough that no one looking for random adventures with them will ever hurt for options (not to mention the canon Marvel comics, which could be another article entirely). But because there was no real storytelling goal in those days beyond “what happened next?”, a lot of them weren’t that great, and even a bunch of the great ones didn’t do anything especially bold or notable with the characters. I hope that from now on, a canon SkySolo novel will be an event; something that matters to the bigger picture of their lives. And if that means much fewer of them, so be it.

One big mistake of the EU, and part and parcel of this topic, was its failure to fully move on from the Big Three once the next generation had come of age. In that respect, The Force Awakens was a huge success, so much so that for the first time ever, it’s possible the desire for Luke/Han/Leia stories will fade over the next few years, replaced by the new “Big Three” of Rey, Finn, and Poe. I wonder what novels we’ll get about them.