Those lines, in the first teaser for The Last Jedi, led to a mountain of speculation about just how far the film would go in terms of challenging and changing our understanding of the Force and the Jedi Order. Could it herald the beginning of “grey Jedi,” or Rey and Kylo Ren starting a new order of “balanced Force users” (whatever that is supposed to mean)? As it turned out, those lines were not in the film, and far from reinventing or even re-framing our understanding of the Force, TLJ reinforced it.

The entire film is ambitious in its attempts to cram in as many classic Star Wars themes and values as possible: the danger of impulsive, reckless heroism and the importance of patience; that staying neutral in the fight against evil makes you complicit; and the notion that the younger generation will redeem the mistakes of the old. It is in its exploration of the Force, though, that TLJ covers the most ground, and makes old Star Wars values more explicit in the text than ever.

Luke’s fear of Rey’s power only heightens her sense of loneliness and abandonment, leading her to find a kind of empathy and understanding with Kylo Ren – one which could easily have had dreadful consequences. This was clearly telegraphed in the trailers, but the biggest shock was the revelation that one moment of weakness from Luke – instinctively igniting his lightsaber when he saw the death and destruction Ben Solo would cause – ended up confirming Ben’s choice, and led to those very events taking place. This is a classic Star Wars self-fulfilling prophecy, just as Anakin’s fear of Padmé’s death led to him taking the actions that ultimately cause it. “Fear,” as a wise man once said, “is the path to the dark side,” and this includes the effects that our fears have on other people.

This could be a controversial story choice, but it is handled with some nuance. Luke’s great victory in Return of the Jedi comes when he throws away that very same lightsaber and refuses to fight or kill. This compassionate act, Rey tells him, makes him a legend. But as Yoda tells Ezra in Star Wars Rebels, “a challenge lifelong it is, not to bend fear into anger.” Or, indeed, violence. You do not just beat the dark side once and then “level up,” free of its lure or of those instincts forever. It is a daily battle to control those negative emotions and maintain personal balance.

So what of balance, that defining theme promised in the first teaser?

The Balance of Nature

The tendency among fans is to think of balance as a mathematical equation, and that it is to do with the numbers of people who wield the dark side and the light side; or that it requires someone who can wield both sides, or a teaming-up of light and dark. Those interpretations are not consistent with the story of Episodes I-VI, or with George Lucas’s statements about it. The rise of Darth Sidious, Lucas tells us, causes the imbalance, and it is his death – as well as Anakin’s redemption – that brings balance back to the Force. Luke himself states this in TLJ – following the Emperor’s death, “there was balance for a time.” Lucas’s intention is now a clear part of the text.

TLJ’s explanation of balance is consistent with this. It’s not about Force-users – it’s about life itself. As Rey reaches into the Force, she sees the balance of nature on the island – life, death creating new life, peace, violence, warmth, cold. An ecosystem in harmony, consistent with Qui-Gon Jinn’s explanation in The Clone Wars that the natural cycle of the living Force feeds into the cosmic Force. If we use this as our base, the rise of Darth Sidious, and the fear, anger and hatred he spreads across the galaxy in the Clone Wars and subsequent Empire, are like introducing a tyrannosaurus rex into the English countryside. The balance of nature is destroyed.  TLJ then takes the idea further, framing Ben Solo’s descent into the dark side and rise to power as the cause of this new imbalance, and Rey’s awakening as the Force’s attempt to halt this. “Darkness rises, and the light to meet it.”

This is different – though not entirely unconnected – from the notion of personal balance. This appears to be the Jungian growth of a human being to discover your true self, and involves confronting and accepting your “shadow” – your dark side. Luke’s journey in the original trilogy is realising that Vader is a part of him, and that he holds the same potential for fear and aggression; in TCW, Yoda literally faces his shadow and accepts it as part of himself. In TLJ, Rey confronts her feelings of abandonment, discovering that she is more similar to Kylo Ren than she would initially like to admit. She finds empathy and compassion for Kylo, but ultimately chooses a better path. Only by confronting our shadow can we understand ourselves and make moral choices.

The Insatiable Dark Side

The connection between Rey and Kylo Ren – a psychological tug-of-war of alternating empathy and emotional manipulation – is the driving force of TLJ. Rey’s boundless compassion wants to see change and redemption in Ben, while Kylo’s own intentions regarding Rey are somewhat ambiguous. TLJ does something truly shocking by giving us, at the end of the second act, the ending that many had predicted for Episode IX – Kylo Ren killing Snoke, and fighting alongside Rey. And then it takes us beyond that.

Just as in the Mortis trilogy in TCW, which begins with a state of balance between light and dark, the dark side ultimately proves insatiable. Kylo Ren cannot resist the lure of the throne, the chance to rule with Rey by his side and shape the universe the way he sees fit. However this is framed – pure evil, or benevolent leadership – “ruling”, dictatorship using the power of the Force to impose your will, is fundamentally disharmonious, and will only cause imbalance. It is only by letting go of your power that harmony can be achieved. Balance, it turns out, is not found in the light and dark sides teaming up against a greater enemy, because when that enemy is gone, the dark side remains insatiable. Kylo only wants more.

As TLJ ends, Rey has almost nothing … except her “found family” on the Millennium Falcon. And yet, surrounded by love, hope and purpose, she has everything she needs. Kylo, by contrast, rules the galaxy, but is more lost and alone than ever in the dust of the Resistance base on Crait, with only his best friend General Hux for company, having pushed away the one person who still found compassion for him. The dark side promises everything, and gives us nothing; the light promises nothing, and gives us everything.

Reinforcing this theme, Luke sacrifices himself to give the Resistance, and Rey, the chance to escape. Luke’s sacrifice is joyful – one of “peace and purpose,” Rey tells us, once again making explicit something Lucas had buried in the text. “The light side is joy, everlasting and difficult to achieve.” This kind of connection to the Force – a power neither Vader nor Kylo Ren could possibly understand – comes from absolute selflessness, as Qui-Gon Jinn tells us in the Revenge of the Sith novelization. Mourn Luke, do not. Miss him, do not. Luke Skywalker has achieved the ultimate power by letting go of his power and passing it to the next generation. It is the perfect finale for the greatest Star Wars hero of all.

The New Jedi Will Rise

TLJ does give us a few new “Force powers,” but nothing revolutionary. The “bridge” Snoke creates between Rey and Kylo’s minds reminds us of the way Maul appears to Ezra in Rebels; so too does the moment where Rey and Kylo touch hands, and see what they want to see in the same future event – just as Ezra and Maul both see the answer to their problems on Tatooine when they combine the Jedi and Sith Holocrons. Luke projecting himself across the galaxy may be controversial, but we have seen similar powers from Mother Talzin in TCW, and it also calls to mind early concepts for the ending of RotJ, where the ghosts of Obi-Wan and Yoda would appear to help Luke fight the Emperor. 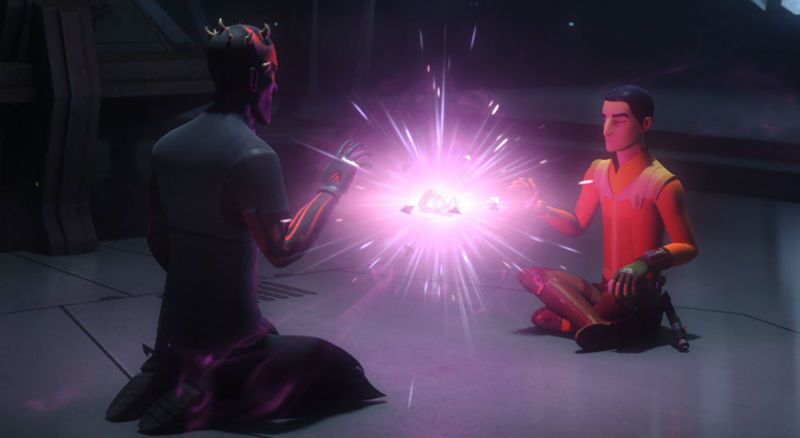 Where TLJ pushes the mythology forward is in the birth of the new Jedi. Luke’s sacrifice is the ultimate vote of faith in Rey. Now we know why the lightsaber called to her, led her to the island, why she had dreams about the tree containing the ancient Jedi texts (books she stores in a drawer on the Falcon). As Rey closes the Falcon door on Kylo, cold disappointment on her face, her “belonging” in the story becomes clear. Her destiny is not, after all, defined by Kylo Ren, and it is not her responsibility to redeem him, much as she tried. She will now forge her own path, drawing on her own strength and that of her friends. Rey’s destiny is to become the first of a new generation of Jedi, perhaps someday training the random stable boy who is able to call his broom to his hand.

This film understands that the reputation of the Jedi, even among fans, was damaged – intentionally so – following their failures in the prequel trilogy and TCW. Luke even acknowledges this, invoking it as one of the reasons to end the Order. By the end of the film, though, Rian Johnson has restored the notion of the Jedi journey to something aspirational, inspirational and magical. He has also opened out the concept, made it feel the way it must have done in 1977. This isn’t about bloodline any more, and every child watching this movie will believe they could be a Jedi, too.

TLJ is about letting the past die … but not all of it. It’s also about holding on to what’s important and protecting the light. As Yoda tells Luke, the way of the Jedi is not found in dusty old books and lists of rules. It’s being a good person, acting from compassion rather than vengeance, finding our balance and letting go of fear and resentment, and Rey indeed already has everything she needs.

TLJ ends allowing for a blank slate in Episode IX. It could go anywhere and be anything, and there is space for years of books and comics and animated series about the birth and growth of the Rebellion against Kylo Ren’s tyranny. Rey’s trajectory and role in the story is now clear. She will make mistakes, because everyone does, and failure is the greatest teacher. But there is now a future for the Jedi Order and for Star Wars itself when the Skywalker bloodline has long died out, and at its heart is a random scavenger from Jakku who cares about people, and just wants to see the best in them. 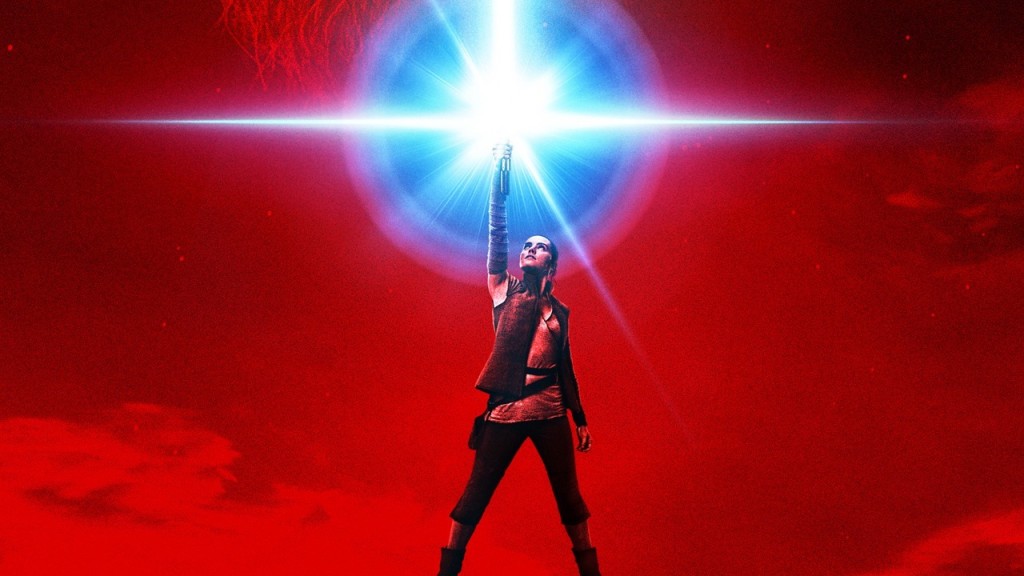 11 thoughts to “The Force Reinforced: How The Last Jedi Reaffirms the Values of Star Wars”