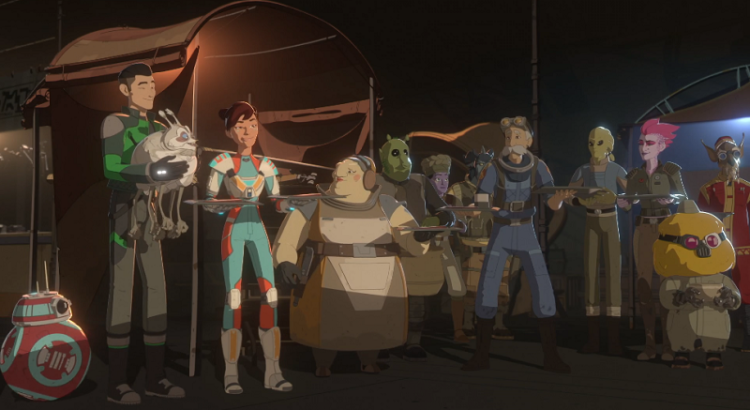 What makes Star Wars feel like Star Wars? This is a question that’s becoming increasingly important with The Rise of Skywalker looming on the horizon, where some of the most fundamental elements of the franchise that we’re familiar with are going away along with the numbered titles. There’s been a lot of talk about what the X-factor is that makes a story with Star Wars on the label actually “feel” like Star Wars in practice, whether it’s a matter of aesthetics or characters or ideas or something else entirely. Certain stories have been playing with removing some elements, shaving the formula down to see what can go and what needs to stay, but no media in the franchise has gone as far down this road as Star Wars Resistance.

Resistance has taken away things like the Force, lightsabers, and ninety percent of the movie characters, leaving us with a mostly new cast in a new setting that has some shared aesthetics as the films but with a unique art style to change it up in a major way. So what does Resistance have that makes it still feel fitting within the wider universe? Themes. What makes a Star Wars story really feel like Star Wars are its themes; themes of love, friendship, and hope. Resistance carries those themes not only in its heart but on its sleeve, as befitting its nature as a show aimed toward a younger audience. Thus, even with a limited scope and even more limited budget, Resistance is still Star Wars, and probably the best Star Wars of its scale that’s ever been done.

When Resistance ended its first season right smack dab in the middle of the sequel trilogy timeline, with the destruction of Hosnian Prime on one side and the flight from D’Qar on the other, there was a common assumption (including on my part) that this was the show casting itself off into the wider universe and leveling up its sense of scope, similar to how Rebels did at the end of its first season. However, five episodes into its second and final season, Resistance is, well, resisting this assumption. Following the major events of the season premiere, each episode since has been far less concerned with major events and more focused on the characters and their dynamics, showing how well each character knows the others and the blossoming friendships between those now living together aboard the Colossus.

Let’s look at some quick examples of how Resistance plays with our themes from the last three episodes. In “Live Fire”, we finally get a long look at the Aces and see how they are reacting to the happenstance of the war. Hype Fazon, our resident jerk jock, is his usual lovably-arrogant self, but we learn that his reluctance to fly into battle is based on a childhood spent under the Empire. His anger at Kaz isn’t because he sees Kaz as a rival, but rather because he blames Kaz and Yeager for causing the First Order to attack the Colossus in the first place and bring back the trauma of a life spent under the previous evil regime. What draws him out of this isn’t Kaz’s earnest insistence, it’s his friendship with Torra and the friendly rivalry they have, along with her drawing out his heart by playing to his ego.

When we get to “Hunt on Celsor 3”, it becomes the Kaz and Torra Show. After Tam’s departure from the main cast into her own subplot, Torra has basically filled her role as the surrogate sister/foil for Kaz, though instead of being the stolid and serious one, Torra is far more enthusiastic and even occasionally forces Kaz into playing the straight-man role. “Hunt on Celsor 3” doesn’t show any landmark moments in their relationship, but it does show their chemistry and camaraderie in their shared concern not only for the denizens of the Colossus and for Torra’s father, but also for Torra’s pet Buggles. Like the adoptive siblings they are, they play off each other, mock each other, but when the chips are down they will do whatever it takes to make sure the other makes it back home alive.

Then we get to the heartbreaker, “The Engineer”. After fading mostly into the background for the past couple of episodes, our good good boy Neeku and morally confused pirate Synara both came back to the forefront of the story. Synara’s role as the second-in-command of Krogan’s pirates plays a major part in solving the friction between him and Kaz, and while the events of the episode (no spoilers) test her friendship with Kaz, ultimately their shared trust wins out. The bigger role, though, goes to Neeku, who is typically played for laughs with his relationships with other characters, seen as naïve or too literal-minded to be taken very seriously. But when Nena enters the stage, grabbing Neeku’s heart and yanking it from his chest Temple of Doom-style, we see some of that naïveté shatter, to the point where he laments to Kaz that perhaps he should not be so trusting in the future. But Kaz discourages this, saying that Neeku is the best person that he knows, and that his trust in others is one of the biggest reason for that.

In many ways, Kaz is the perfect protagonist for the sort of story that Resistance is trying to tell. Unlike Ezra or Ahsoka, he doesn’t have the Force knocking on the door and thus doesn’t have the weight of destiny or the pressure of expectations on him in the way they did. He carries himself with a sense of hope and encouragement in every circumstance that he finds himself in. Likewise, Resistance has that same sense of life and hope to it, even when it is showing the most dire and dark events of the time frame. We have seen what happened to Hosnian Prime and the aftermath of D’Qar, but the show’s tone and path never wavered. Everything else about Resistance feels light, freeform and dynamic, and just about every episode wraps on a note of hope and optimism despite the circumstances.

This is what makes Resistance fundamentally Star Wars, despite lacking the big flashy parts people tend to point at when asked what Star Wars is. It has thrived by focusing on the mundane parts of its characters’ daily lives, which then in turn pays off through major character moments that build off of those fundamental Star Wars themes. When handed down a more limited budget and time frame compared to its predecessors, Resistance took advantage of those factors rather than being restricted by them, and gave us the best mundane storytelling yet in Star Wars. It’s given us stories of camaraderie, fun and action, and its overall themes are of love and friendship, of people being better than they think they are, of hope and lifting each other up.

Resistance can get to the war eventually. Right now, it’s content to show us what the daily life of our cast is, to get us familiar with them and draw our focus away from the big galactic events that we’re used to focusing on. We can see Kaz and Torra on a hunt for food for the Colossus’s population and not rage that we are somehow being distracted from the events that actually matter. This, the show says, is what matters: seeing Kaz and Torra succeed, rescuing each other from danger and becoming closer as friends, seeing them bond with others on the crew after their success keeps them from having to leave, and seeing everyone come together for a celebratory feast at the end. It’s the small things, the mundane, that make Resistance what it is, and will make it stand on its own as something unique even after it’s come to an end.

One thought to “Re: Resistance – The Draw of the Mundane”