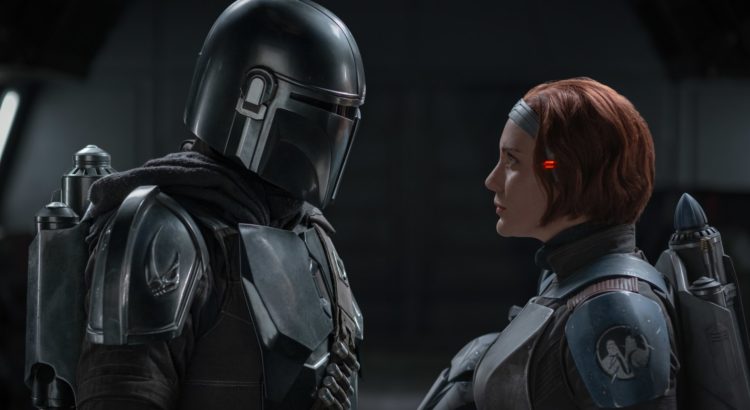 In particular, a-spec – meaning on the aromantic and/or asexual spectrums – representation is important to me. It’s something I don’t get to see celebrated in fiction very frequently. Think of all the stories, outside the romance genre, that still rely on romance or sex as shorthand for goodness, selflessness, humanity, or treat it like the reward for being a hero. Or take a perusal through the examples in the TV Tropes asexuality page, and note how many examples are villains who use romance or sex as manipulation, but don’t actually feel attraction and are depicted as cold or emotionless.

According to a lot of fiction, feeling sexual and romantic or having sex and romance is good. Lacking either, or lacking the feelings of either, is bad. It’s not a very pleasant or nuanced picture to have painted of yourself over and over again.

So imagine my delight when our first confirmed a-spec character in Star Wars was none other than the dashing hero Vi Moradi! Charismatic and swashbuckling, I had a squish1 on her from the first time I first saw recordings of Galaxy’s Edge. And then, like a gift from on high, the novel Black Spire made her our first a-spec representation. My fellow Eleven-ThirtyEight writer Ben Wahrman and I took to the site to declare our excitement over this development, but it wasn’t the first time I felt reflected in Star Wars.

One of my first pieces2 on here was about how Omi the dianoga’s desire for a platonic partner resonated with me. Later, I would be more explicit in discussing my a-spec identity with regard to the character of Rey.

There’s also Obi-Wan, who feels a-spec to me, especially in the context of Satine Kryze. Their dynamic challenges the idea that romance and sex are innately good and should override every other motive in a person’s life. Obi-Wan and Satine decline to pursue a relationship in order to uphold their oaths to others, and neither is painted as cold or unloving in doing so.

Maul is the rare example of a villain with a-spec qualities that doesn’t offend me. The stereotype of this villain is that they cannot feel attraction to others and therefore reject all connection with other people. Their a-spec nature is inherent to their villainy. That’s not Maul. He wants so much to matter to anyone in any way that he’ll burn down an entire planet (or two, and maybe the same planet twice) to just be something to someone.

Din Djarin came on strong with more metaphorical a-spec vibes in the first season of The Mandalorian through the various reactions to his mask. An inherent part of his identity, it was treated like a barrier preventing Din from experiencing true intimacy with others, some characters even cruelly teasing and pushing at the boundary because it’s not “normal”. Yet even through it, Din was able to form connections and a small community with people.

Now why, you may ask, can I not simply be happy with the confirmed representation of Vi and my endless headcanons? Why am I asking Star Wars for more? Well, the same reason Din has to loosen up his definitions of what a Mandalorian is. There’s more than one way to be a-spec.

Aromanticism and asexuality are often conflated, and we see that in Vi’s description of herself to her companion Archex. She’s only confirmed to be asexual, but the words she uses to define her attraction heavily imply aromanticism as well. This is great for me, an aromantic and asexual, but making them equivalent masks the lives of countless a-spec individuals. There are asexual people who experience romantic attraction, and aromantic people who experience sexual attraction. Someone can be aromantic and be repulsed by the idea of a romantic relationship or actively want to be in one. Asexual people also live across the spectrum between sex-positive and sex-repulsed. And this doesn’t even touch on demi or grey attractions.

A-spec people can’t be summed up in just one character.

Furthermore, it’s not just variation in how we experience attraction that needs to be considered. Representation requires intersectionality, or we just end up with the tenth skinny white brunette cis woman in a row and call it progressive feminism as everyone else of a marginalized identity gets shunted off to the side. In Vi’s case, Black Spire may have delivered on asexual representation, but it dropped the ball when it came to race. Ben and I, both being white, missed this on our first reads and in our article. But in listening to Black fans and other fans of color, we soon learned that the portrayal of Vi and Archex in Black Spire had multiple racist elements.

The canon that gave us Vi’s asexuality is also the canon that failed her as a Black woman, and we can’t separate those two identities in Vi. Being white and asexual in our world is different than being Black and asexual because of the different constraints and assumptions that society puts upon us. Star Wars may take place in a galaxy far, far away, but it’s written by and for people with this Earth beneath our feet. It’s inherently going to involve the context of our society, and that context can be harmful to people.

Speaking of which, there’s ground that Star Wars needs to make up for in the department of a-spec representation. Romance3 is centered quite frequently, and most of the lead characters in Star Wars media are given at least passing attractions to others. The asexual representation that we did get happens because Vi has to out herself to keep Archex from crossing a boundary without consent. And while I appreciate Maul’s portrayal, he isn’t the only villain with a-spec qualities, and others tend to lean into the stereotype.

Look at Phasma, whose novel sets her apart from the sympathetic members of her clan because she has never been in a relationship, thus painting her as ruthless and unable to care for anyone. Look at Dooku, who never has a love interest and ends up killing those closest to him for the sake of power. Look at Palpatine in The Rise of Skywalker, which ended up with unfortunate implications regarding aromanticism and asexuality.

In the novelization of the film we learn that Rey’s father is not someone Palpatine sired through intercourse, but rather a clone that fled Palpatine, married a woman, and sired Rey. While I do like the concept of a clone rejecting the identity of his blueprint, when Palpatine ends up reproducing through a clone, the family line looks like this:

Now let’s add Rey to this line. Throughout The Force Awakens and The Last Jedi, the movies ask “who is Rey?” and it ties into “is she going to be good or evil?” In these movies, she does not have an explicitly romantic or sexual relationship with anyone. There have been interpretations and headcanons of course, ships with multiple characters, but nothing screen-explicit.

I don’t think J.J. Abrams and the writers intentionally wanted to spread the message that “aromantic people and asexual people are evil!” But these choices do tie into to the broader assumptions of our culture that romance and sex are the height of love and purify every motive. They tie into the pressure that a-spec people feel in that our love is somehow “not enough”.

Of course, Star Wars isn’t the only place that has failed in a-spec representation, but we do see progress being made in other works of fiction. Star Wars authors like Justina Ireland, C.B. Lee, Emily Skrutskie have a-spec leads in their own scifi novels: the Dread Nation duology, Sidekick Squad series, and Hullmetal Girls, respectively. Even romance has tapped into a-spec characters like Claire Kann’s YA novels or Claudie Arsenault’s Baker Thief.

You probably are able to list examples from all of these and probably already have some ready to type out as counterpoints to this essay (essential part of fandom, etc.). However, I can guarantee you that however many you can list, it’s not enough to tap into or draw from the nuances of what it means to be any of these identities, much less an intersection of them.

Imagine if The Mandalorian only drew from The Clone Wars or Rebels or Legends or The Star Wars Holiday Special, and not the combination thereof that we’ve received. What if its conclusion was that there was only one way to be a Mandalorian? The show and the franchise would be lesser for not exploring the nuances that were already available to them. When it comes to a-spec and other real-life identities, Star Wars is lesser when it refuses to explore the nuances of what it means to be one of us.

In light of, sadly, more than one ongoing concern regarding the cast of The Mandalorian, Eleven-ThirtyEight would like to take a moment to highlight this excellent fundraiser started by Star Wars fans on behalf of the Transgender Law Center. This notice will accompany all of our Mandalorian content this season, but it should be seen as the bare minimum, and does not preclude more direct coverage of the matter in the future. Trans rights are human rights.

2 thoughts to “More Than One Way to Be Mandalorian”