As far as Farscape, humans really were not superior! Not even close. For Star Wars?  It is considerably hazier but aliens do seem to fall into a number of frequent use categories or roles. Of course, if we go by Imperial propaganda, humans are superior but that was the Empire for you.

Single trait: this tends to crop up frequently, Hutts tend to gangsters, Twi’leks are frequently dodgy, Wookiees are heavy hitters that no one messes with. There are exceptions to this – Aayla Secura for instance for Twi’leks, the recent Dawn of the Jedi: Into The Void also gave us Tre Sana.

Less enlightened: step forward Borsk Fey’Lya and his successor, Pwoe. These two make the case for why aliens can’t run the galaxy – look what happened when they did! The galaxy conquered, Coruscant ravaged, trillions dead. More so than others, they also traded their alien status to gain power, Borsk never missed an opportunity to bring up what the Empire – and by extension – humans had done to the Bothans. Pwoe was inclined to similar gutter politics.

More enlightened: I’m hard pressed to think of many such characters, for all Yoda knows we see him take a serious loss in Revenge of the Sith.  There is the Caamasi character of Elegos Akla, who we see advising Corran Horn both in I, Jedi and the New Jedi Order.  However, the latter story kills him off, so Horn can no longer rely on his advice.

What of equals? There are a few, sure there’s Chewbacca, but he was so little used and deemed so uninteresting that a moon was dropped on him!  What of Gavrisom, who ran the Republic during the Hand of Thrawn books?  He gets frequently compared to Leia, so of course he’s going to lose, but he did just about keep the Republic together and was then never seen again.  Legacy gives us Gar Stazi, even Cade Skywalker could not disrespect this formidable Duros.  He tried certainly, but failed.

What I’m getting at here, for all that aliens feature, it tends to be humans that the galaxy revolves around.  To be fair, however, Star Wars is far from the only offender in this respect.  Star Trek commits the sin numerous times – Klingons, Ferengi, Cardassian, Andorian, Vulcan – they can’t get anywhere without humans.  Babylon 5? The Shadows and Vorlons had a nice once-a-millennium traditional punch-up going on and then those pesky humans poked their nose in and it all had to stop!

It could be asked, for the politics, why is there not an anti-Fey’lya type present? An alien politician who has succeeded not by taking the low road but the high? Would such a character be seen as a threat to Luke, Han and Leia’s moral authority? Even if there was, the accusation could still be made that for all their appearances, alien characters are simply partial reflections of human traits in external form. It’s difficult to refute this because, by its very nature, it is inevitable. The only response is to bring in aliens who are, in every sense, alien in their outlook but these tend to be exceedingly difficult to create. Even when they are set up, the resolution options tend to be separation or co-existence, with the latter being made possible through the identification of some common ground. So, not all that alien after all then. 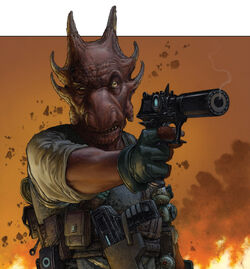 Perhaps better to ask what characters there are that are deemed as equal to the lead human characters? In this respect, it seems the best examples in recent years can be found in comics. Knights of the Old Republic alone gives us two very well-realized characters in the form of Jarael and Gryph, the latter of which has his own fanbase!  Dark Times has Bomo and the crew of the Uhumele, all well-done characters.  In both cases we don’t see either Zayne Carrick or Jass Dennir attempting to steamroller them into submission, although it isn’t in their character to do so. Stazi, already mentioned, tends to take center stage in any story he’s in and then there’s Jedi Master K’Krukh…

Who has the status of controversy incarnate for some fans. Why? Because he legged it when Order 66 came down, hid out for a few decades, then returned to the revived Jedi Order and was feted as a wise senior Jedi! Nor is this restricted to K’Krukh, as a Neti character, T’ra Saa, also tends to get blasted for similar reasons. And they’re running the Jedi Order in Legacy, opting for a similar strategy to that used by Yoda and Obi-Wan, of waiting the Sith out until the right time. To be fair, the charge tends to be that they didn’t earn the leadership positions they occupy, but a counterpoint to this is that we do not know how they attained those positions.

And there is perhaps the crux of the matter: Should alien characters hold positions of power? About the only popular such character I can think of there is Admiral Ackbar – very popular creation in every respect. Others? There is, of course, Thrawn, until he became all heroic. (Or did he?) There is Saba Setayne, who is often seen as Denning’s pet character much in the way Thrawn is seen as Zahn’s. Surely there should be more? Perhaps this is something Episode VII will attempt to fix. Until then we’re stuck with the current flawed and very limited selection.

2 thoughts to ““Humans ARE Superior!” Really?”