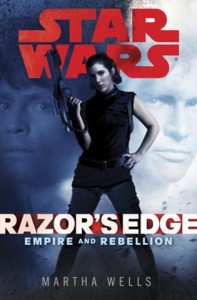 Razor’s Edge takes place between A New Hope and Empire Strikes Back. The book was advertised as Leia’s book and Martha Wells delivers that and more for Star Wars fans. The premise of the book is that Leia is going to meet with someone Han knows in order to get supplies for Echo base. The two are traveling on a ship with General Willard which is a great use of one of the lesser known Generals from the movies. Their ship gets attacked and as they are limping in to Arnot Station Leia discovers a long lost Alderaanian gunship marauding as a pirate. This bothers Leia who decides to interfere and ends up taking a small crew (including Han) over to the ship in the hopes of convincing them to join the Rebel Alliance.

Of course nothing goes as planned and the pirates end up sort of kidnapping Leia and Han by having to return to the pirate base in order to fulfill an obligation. Leia is now on a crusade to save the prisoners turned slaves from the ship the pirates took and ends up doing pretty cool action scenes in order to prove her worth to the Alderaanians. Both crews are betrayed by the traitor from Leia’s rebel crew but the heroes manage to survive and save the prisoners with the help of Chewbacca and Luke who were sent by General Madine to help protect the Gamble on its way back from the meeting which never takes place.

The story is pretty classically Star Wars EU and this story really shine from the minor details Wells includes. She definitely did her homework before writing this novel. Wells, while using a heavily female cast (yay!), also uses a variety of species and even invents a few of her own. She makes sure to include different races of humans as well, something the EU fans have been complaining about for awhile now. The three main females Leia, Captain Metara and Captain Aral tukor Viest are well written with detailed descriptions of their looks. The interactions between the characters are clever and the use of a Lorrdian is a nice nod to the EU and does a good job of explaining how a female pirate could have taken over the massive operation in a male dominated time during the Empire’s reign.

Some of the new or little used species include an Andulian (“grey skin, long white hair, furry brows, and atrophied gills in their cheeks”), Ishori an amphibious species, and a Videllan (“gold-brown skin of a leathery texture, a high forehead curving back to a fringe of fluffy golden hair, a beard, and large, expressive eyes with high, tufted brows”). I’ve often thought that during this timeframe the EU authors fall back on the classic movie species so it was very refreshing to read about new species.

“When it comes to trying to stop a crew of innocent bystanders from being sold into slavery, yes, I’m happy to lie with the best of them.”

Leia’s characterization was perhaps one of her best. We even got an introspection from Leia concerning her being seen as a figurehead or symbol for the Alliance. Leia shows some insecurity for being seen as this perfect symbol and wonders how long she can go before she makes a big mistake. This introspection actually strengthens Leia’s character and her grit and determination really shine through in this novel.

The use of Luke Skywalker in this book was also well done because it wasn’t overdone. It seems difficult for authors to use Skywalker without having him become the focus of the story but Wells was able to do so. A pre-Jedi Luke falls for one of the oldest tricks in the book showing the naive farmboy he was during that time but it was nice to see that she didn’t undervalue Luke’s ability since he basically had himself freed but Wells still allowed Leia to ride to the rescue and save Skywalker from being handed over to the Empire.

I really only have one complaint and this complaint probably was my own doing. So I was under the impression that this book was going to give me strong female characters and focus on Leia. Ok the book delivered, except for one part and it was a pretty big turning point in the story. Perhaps if I hadn’t had some expectations going into this book I wouldn’t have been so bothered by it and it might have been unfair of me to put my expectations and hopes for the heroine on Razor’s Edge. Leia is competing in a death match meets the Star Wars version of Quidditch for the sake of the pirates’ entertainment and she thinks if she wins she’ll get what she came for. That’s the ‘deal’ at least. So Leia is on the verge of winning even against the cheating pirates’ droid. Somehow they magically fall through the net and as they’re falling Han Solo who has also somehow fallen through several tunnels comes from the opposite side of the station and bizarrely finds himself in a position to save Leia by ramming a flatbed repulsor into the droid. There was no reason for Han to have done this. This was a perfect place to have Leia be the winner all on her own and it really made me angry to see this in the book that was supposed to showcase Leia. This scene was set up to deliver what I’ve been looking for in a female character’s part of the story and Wells fumbles the ball by having Han end up stumbling through a convoluted way and ending up saving Leia.

If you enjoy Star Wars EU during this time period or you enjoy Leia Organa as a character I would highly recommend this book. Pay attention to the details and enjoy a well written Leia.