Last week, I began this series to answer some of the burning Star Wars questions my casual-fan friends were always asking me—if you missed it, click here to find out how lightsabers were invented, whether there are other galaxies outside of the main one, and how exactly Emperor Palpatine fell to the Dark Side. This entry finishes off my first batch of questions, but readers are encouraged to pose their own questions in the comments section below (or via e-mail) for use in further volumes.

Now with that out of the way, on to Volume II…

4. What is the origin of the Millennium Falcon?

Well, first, it should be pointed out that the Falcon, officially a Corellian Engineering Corporation YT-1300 light freighter, is the “windowless white van” of the Star Wars universe. It looks so cool to us in real life that it’s easy to overlook the fact that even farmboy yokel Luke Skywalker calls it a “piece of junk” at first glance. As Han is quick to point out, what sets it apart is a number of “special modifications”—though even Han can’t take credit for all of them.

The YT series was notable in the first place for being an extremely modular and reconfigurable freighter series, which allowed for lots of cosmetic variations from model to model (like this and this) without having to redesign the thing from the ground up. It also meant that a pilot who knew his stuff had a great deal of leeway to alter basic systems—shielding, weaponry, hyperdrive—based on his priorities. For the computer nerds among us, the way I always explain my love of PCs to people is that Macs are the Enterprise (easy to use, ready right out of the box), and PCs are the Falcon (temperamental, but extraordinarily customizable).

Anyway, the YT-1300 model was introduced in 72 BBY (Before the Battle of Yavin), and the Falcon was built in 60 BBY—in other words, almost thirty years before The Phantom Menace. Having been subject to a malfunction on the assembly line that contributed to the engines’ touchy nature, it was indeed a temperamental ship right from the get-go, and ironically, that probably had a lot to do with its superior performance by the time Han got a hold of it—it was known for breaking down at inopportune moments and stranding its pilots, forcing frequent replacements and upgrades just to stay operational.

After twelve years in service as a regular ol’ freighter, the Falcon finally ended up in the world of smuggling after Corell Industries Limited declared bankruptcy in 48 BBY. This only hastened its evolution into a lean, mean fighting machine, and eventually it was purchased—and operated as the Stellar Envoy—by the Republic Group, which was basically a clandestine but not-exactly-illegal group of Republic loyalists (including Jedi and Senators) hoping to restore the then-foundering Republic to its glory days. Like the Tea Party, but with an actual point. The Clone Wars erupted not too long afterward, so obviously things didn’t quite work out for them, either.

It was Republic Group business, by the way, that led to the Falcon being present on Coruscant during the abduction of Chancellor Palpatine in Revenge of the Sith, and the ship can actually be seen in the movie shortly after Anakin and Obi-Wan’s crash landing.

Eventually the Envoy got into a pretty bad accident and was sold as scrap to an idiosyncratic engineer, who largely rebuilt it and ultimately put it back to work in illegal activities (and at one point, as the home base for a travelling circus). Things continued like this until Lando won the ship in 5 BBY, by which point it’d been named the Millennium Falcon, in honor of its speed and longevity. Lando then made the mistake of asking his friend Han Solo to teach him how to fly it, at which point Han promptly fell in love with the old girl. Lando had a couple solid years of adventures in the ship alongside his copilot Vuffi Raa, one of the best EU characters ever, before ultimately losing it to Han the same way he’d won it—in a game of sabacc.

5. Are there Jedi doing other things with the Force? Agriculture? Medicine? 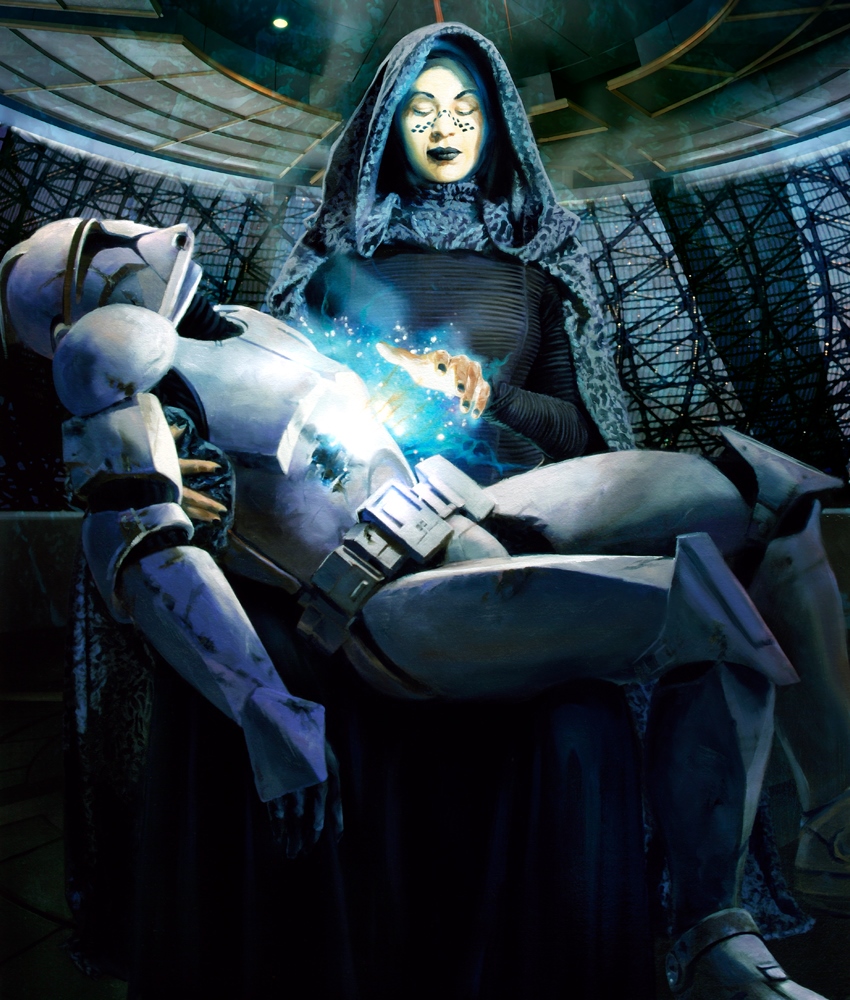 It should go without saying, of course, that even regular Jedi are adept at Force healing, especially in combat situations—and lots of material has been written about Jedi healing practices during the Clone Wars and later in Luke’s new Jedi Order.

But hey, funny story—did you know that in the time of the Prequels, there are actually four Jedi Councils? That’s right—what did you think those other towers were for?

The Council of Reassignment’s job was to, well, the name says it all. They oversaw the four branches of the Jedi Service Corps—Agricultural, Medical, Educational, and Exploration. When up-and-coming Jedi students proved to not have the temperament, or raw Force potential, for the standard Knight lifestyle, the Council would place them where what talents they did possess could still be put to use in service of the Republic, while allowing them to sleep in once in a while. This system led to the Service Corps being seen by many as a polite way of flunking out, but in truth a lot of younglings (and even older Jedi who lost their taste for the big-ticket work) elected to join the Service Corps as a way to more directly serve the common folk of the galaxy. At least until that whole Empire thing…they didn’t take well to that.

6. Are some species unable to be Force-sensitive? What species is best at it?

This is a tricky topic, as some species very much seem abnormally suited to Force use purely because they’re species that authors feel like making Jedi—Yoda’s species being the prime example. You can count the number of characters of Yoda’s species on your fingers, and sure enough, they’re all Jedi—and mostly important, powerful ones at that. But given how few we’re talking about, it’s hard to take that as definitive evidence that the species itself is unusually Force-inclined; though their longevity could certainly factor into that.

Moving on, another thing that’s come up now and then is the evolutionary benefit of Force-sensitivity—a population composed solely of Jedi will not necessarily produce only Force-sensitive children, but over time, in particularly harsh conditions, sensitives can indeed become more common through natural selection regardless of a species’ normal rate of sensitivity. Mace Windu, notably, is from the human population of a jungle planet called Haruun Kal—which was originally settled by Jedi and did indeed evolve such that the entire human population is Force-sensitive. This seems to be the exception, though; not the rule. 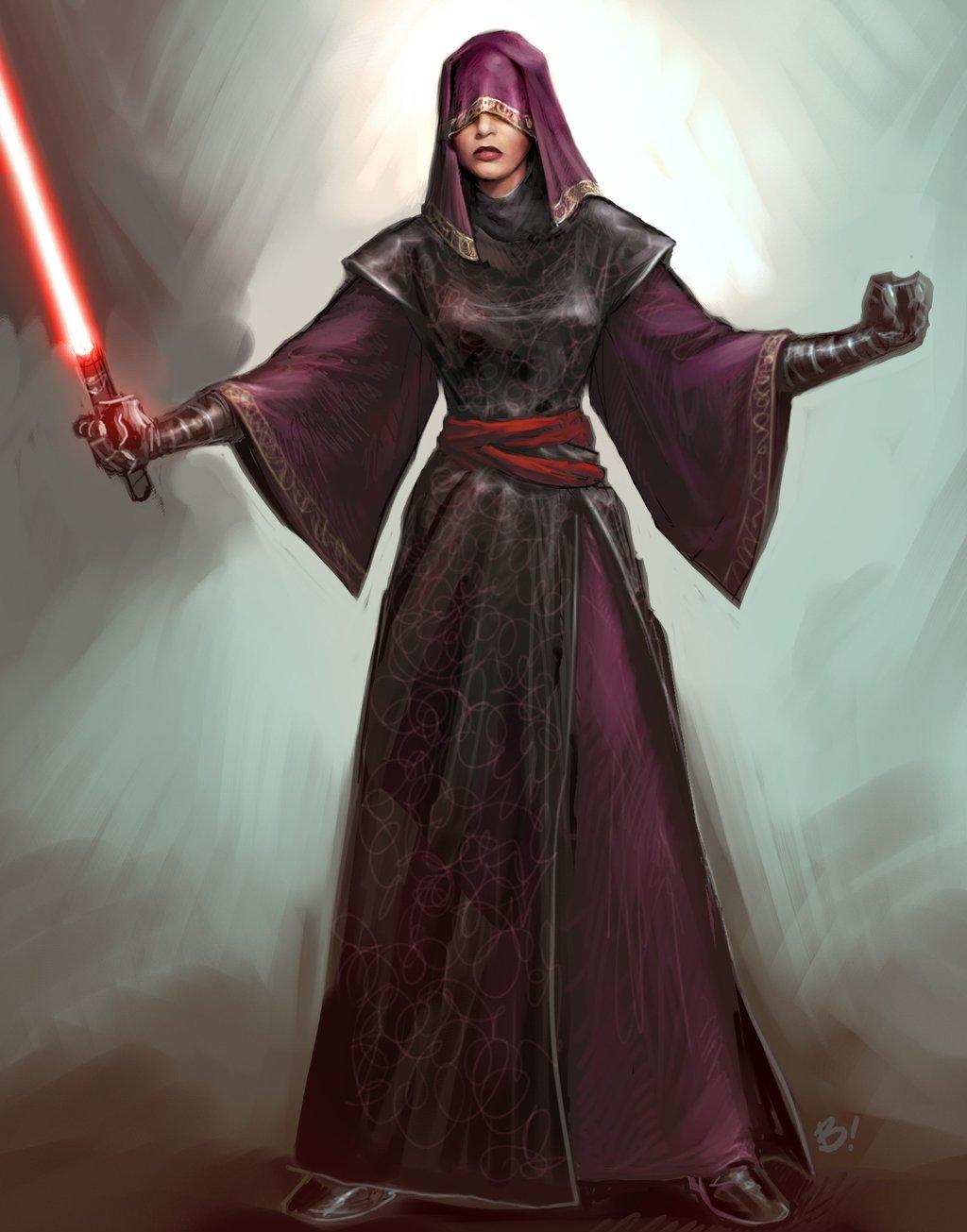 One species, the Miraluka, is so Force-sensitive that they don’t even have eyes; they “see” only what the Force shows them. Gotals (like the goat guy in the Mos Eisley cantina) have limited ESP through their horns that is understood to involve the Force, but that doesn’t necessarily mean they can be Jedi. The nonsentient wolf-like vornskr species actually evolved to hunt with the Force, which led to their natural prey, the ysalamiri, evolving the ability to repel the Force away from them like a little bubble—something that became a huge MacGuffin in New Republic-era EU stories.

On the other end of the spectrum, there’s the Khommites, who decided long ago that their species had reached its ideal evolutionary state and then proceeded to ban natural reproduction in favor of perpetually cloning everyone in existence so that they could continue their historic role in society indefinitely. That worked out okay until Dorsk 81, the first Force-sensitive Khommite ever…or at least in 81 generations.

Last but not least are the Yuuzhan Vong, detailed further in Volume I, who originally existed in a state of Force-sensitive symbiosis with Yuuzhan’tar, their homeworld. When their warring ways led to the death of Yuuzhan’tar’s Gaia-like living consciousness, the species lost its Force connection entirely, and remained that way for so long that upon encountering Jedi they had utterly no frame of reference for what they were seeing.