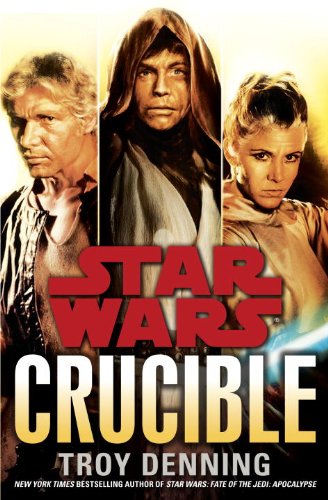 Crosscurrent, furthermore, depends on knowledge of other Expanded Universe concepts like the Great Hyperspace War and Grand Admiral Thrawn’s cloning experiments. It’s a book written for an audience intimately familiar with the Expanded Universe and is probably incomprehensible to outsiders.

Since Timothy Zahn wrote Heir to the Empire in 1991, there has been a steady stream of Star Wars novels continuing the series originally subtitled “The Adventures of Luke Skywalker.” Star Wars is one of the most successful movie franchises of all time, if not the most successful, so this makes sense. There’s an immense audience for people who want to read about the continuing adventures of our heroes.

The thing is, the Expanded Universe has gone well beyond that. As of 2013, there are well over a hundred published novels continuing the adventures of the movies’ heroes as well as entirely original characters. One of my favorite Star Wars characters is Galen Marek, a.k.a Starkiller. Movie fans have never heard of him but as the star of The Force Unleashed video games, he is actually better known than most SWEU characters. Yet, how do you explain who Galen Marek is to outsiders? Well, in my case, I explain he’s Darth Vader’s Sith apprentice who rebelled against him.

This, however, highlights the problem of the Star Wars EU. The reason you can explain Starkiller so easily is because of his relationship to an already famous movie character. It’s the same form of shorthand fans employ to explain Mara Jade (Luke’s wife), Jacen Solo (Han and Leia’s son), Anakin Solo (ditto), and Jaina Solo (Han and Leia’s daughter). Without these identifiers, a lot of people would just go ‘huh?’

The law of diminishing returns means that Star Wars fandom gets progressively smaller the further one goes into the Expanded Universe. It also becomes more difficult for individuals to “jump on” the Star Wars Expanded Universe train. Shatterpoint, starring Samuel L. Jackson’s character of Mace Windu, had somewhat disappointing sales. This despite the fact it was built around a character played by a recognizable actor and one who played a prominent role in the movies. Fans simply weren’t attached to the character of Mace Windu enough to want to buy the book like they would one starring Anakin Skywalker or Luke.

If you’re one of the lucky few to be a Star Wars author, this can be intimidating as it means you’re stuck trying to satisfy two masters. Existing fandom wants to see the continuation of the adventures they’ve dedicated a considerable amount of time and money to following. A fan might not have every Star Wars book ever written but die-hard readers know not only the Solo-Skywalker clan but Dash Rendar, Corran Horn, Kyp Durron, and possibly what the hell a Hoojib is.

These sorts of fans don’t just want to read about the next time Han, Luke, and Leia go to Tatooine–they want a sense of progression as well as new material. In the modern EU, that means we’ve followed Han and Leia marrying, having kids, plus becoming grandparents. They like being reminded of the time the couple visited the planet Dathomir or fought three-eyed tyrant Trioculus. It adds to the illusion the heroes are real people.

The downside is, however, the possibility of what TVtropes.org calls Continuity Lockout. Basically, things have become so complex they’re now impossible for newcomers to follow. As mentioned in Crucible, the Sith are back and there’s substantial changes to our heroes. After all, they’re past their sixties and have dozens of new adventures under their belt. New fans are probably not going to want to buy fifty or sixty books just to understand the latest release already on the shelves at Walmart.

Complicating the issue further is the fact Star Wars fiction has finally exited what many have dubbed the Science Fiction Ghetto. Star Wars has always been Co-Mayor of that ghetto along with Star Trek, but this is a time period when the Expanded Universe is actually reaching the general public. This is due, almost entirely, to the success of George Lucas’ The Clone Wars animated series.

Star Wars has long struggled for respectability in the entertainment industry and the winning of two Emmys (after seven nominations) is a sign it’s achieving that success. The thing is, it’s not the movies which won but a cartoon show which incorporates vast amounts of Expanded Universe material. The Clone Wars has introduced many to Dathomir, the Mandalorian Death Watch, Barriss Offee, Ilum, Ventress, Aurra Sing, and Ryloth.

What has been the EU fandom’s reaction to this? Surprisingly, lukewarm. Fans strongly disliked what they perceived as retcons. George Lucas was less interested in following the continuity created by his franchise’s spinoffs than telling a good story. As a result, the differences stood out all the more and irritated hardcore EU fans while alienating new fans from the die-hards. On TheForce.net, a surprising divide emerged between those who loved the series and who disliked it less for its content than not fitting with their vision.

This is because Star Wars fans, like all fans, tend to develop a sense of protectiveness towards their chosen object of affection. While the Prequels had plenty of ups and downs, a common complaint was they didn’t match the view of the Clone Wars fans had developed in their heads. Fans had come to feel not only affection for it but a sense of ownership. When things appeared they didn’t agree with or changed their view of the “true story” they objected.

This is problematic as Disney takes over the mantle of running the EU. Whether or not Disney dissolves a portion or the entirety of “EU canon”, they’re going to come at it from the sense of wanting new fans to be able to enjoy the series.

For that, old elements have to be reinterpreted and new stories told which are not going to always jive with the series as we imagined it. The Force Unleashed was a very popular video game series, including many elements which made the Saga great as well as a semi-believable drama. Unfortunately, it didn’t always jive with existing fans’ expectations. The formation of the Rebellion, for example, took place in a wildly different manner than previously described. Newcomers to the EU who played the game, on the other hand, loved the sense of power which came from playing such a pivotal character.

Changes like these are an inevitability of serialized fiction. Old stories will be reinterpreted, retold, and repackaged as long as they can bring in new audience
members. How many times have the Death Star plans been stolen? I’m aware

of at least three (Bria Tharen, Havet Storm, and Kyle Katarn). Existing fans will continue picking up new material barring something catastrophic so it’s to the benefit of publishers to make new material appealing to the largest audience possible.

Believe it or not, this is actually a good thing. The Clone Wars, in particular, has brought a whole new generation of Star Wars fans in after the Prequels. Ahsoka, much to many older fans’ horror, is a widely popular character. At the very least, she gives Star Wars’ oft-neglected female fans (particularly young ones) another heroine to identify with. We need to welcome these fans just as the new trilogy and Rebels will generate a whole new crop of EU-loving brethren whose favorite Star Wars material may drastically differ from the kind novel fans are used to.

Does this mean Star Wars’ EU must be reduced to a series of standalones? If we are to maximize accessibility, wouldn’t we have to make sure books function independently of one another? Wouldn’t this cripple a major appeal of the EU? No, no it wouldn’t. It doesn’t take that much time to explain who Mara Jade and other pivotal characters are so that a book can serve as an introduction as well as a continuation.

My first Star Wars novel was Dark Force Rising, which is close to the beginning but not quite there. My best friend only started reading the series with the New Jedi Order. That series, in particular, was written as a jumping-on point and was actually quite successful for bringing in new fans. Every novel is someone’s first and expecting authors to write to an existing fandom alone is short-sighted as well as a wee bit arrogant. There’s good reasons to treat your core fandom well, not the least reason being they tend to buy a lot of books, but they can’t be the only people publishers seek the dollars of.

It’s why the majority of books will always star named movie characters and there probably won’t be any “passing of the torch” unless it’s in a smaller series like Legacy or to the next generation of movie characters. There’s still ample room for smaller series like the Quinlan Vos comics, X-wing novels, or the further video game adventures of Starkiller because the Star Wars name has an appeal all its own. These will never be the focus of the majority of the EU’s attention, however, and that’s not a bad thing. It’s just the nature of the business.

In the meantime, I’m going to welcome any newcomers and not wince when they talk about the day-and-night cycle of Ryloth.

9 thoughts to “Continuity vs. Accessibility: The Struggle of Star Wars Writers”