Our new contributor, Alexander, wrote an article the other day about a case for starting over and my opinion piece kind of piggybacks off of that. I had not read his piece before writing my own so I apologize if some of this overlaps.

To use a well known phrase, the EU has jumped the shark. Sometimes I feel like I am one of the only fans out there who still actually reads the majority of the books being released. I’m not a continuity buff. I don’t ask for much out of the EU except for the books to feel like Star Wars and a semi-decent story. I’m more of a character girl. I like to fall in love with characters in the books I read. For the most part that is why I can read just about anything since the majority of authors can at least write one character well enough to make me feel a connection to them. This is something I crave in life. So I can overlook minor errors in the books though I do admit that with the current plethora of sources the current authors have at their fingertips these errors really seem like laziness to me. 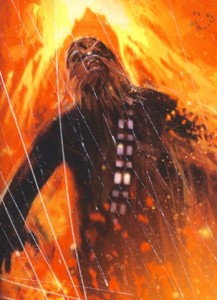 I generally liked the death of Chewbacca and mourned his loss alongside Han Solo while enjoying feeling closer to Han’s character through the depth at which he was written during that time. It was a different side of Han that we hadn’t gotten before and I ate it up. As I continued through the NJO I liked wondering if characters I’d grown attached to were going to make it through the series. The different author’s characterizations didn’t always fit together  seamlessly but each did something to further the main story. NJO worked in the Star Wars universe and provided a much needed change to the EU to shake up the universe for the characters and provide more depth than we were receiving before then.

I no longer feel like I am reading in the Star Wars universe when I pick up a book in what I’ll refer to as the current time period: the place where Han, Luke, and Leia are in the Legacy era. Crucible really solidified this feeling for me and I now believe the best think that can happen for the EU is to have a reboot from the Sequel Trilogy. I’d still like to see the ST keep certain characters, for instance, if Luke has a wife her name should be Mara Jade), but giving us a new set of circumstances from which to launch new stories would hopefully bring the Star Wars back to the EU.

I will mourn the loss of my beloved Corran Horn, but his story has been told and is still there for me to read whenever I feel like curling up with a good book on a rainy day. The EU has not a good enough job of developing characters for the future. The current EU is unable to successfully move on from Luke, Han, and Leia. Crucible was the goodbye from the spotlight for the big three and what do we have left?

Jaina Solo is the most developed character to take over but the cast of characters surrounding her are in name only and that is terrifying. Ben Skywalker is also a little developed, but characters around his age are even more sparse. He never received the same treatment as the Solos. There are no books about his early days at a Jedi academy like KJA’s Young Jedi Knights series which introduced us to what should have been the next generation of Jedi to take over the EU. So many of these characters were destroyed mentally or physically. They were seen as expendable and no one was created to fill the gaps left behind by the loss of these characters. I remember when people got excited to see Seha Dorvald in the Legacy of the Force series, but even she is 6 years older than Ben. So while Jaina and Ben should have well fleshed out peers, the mishandling of the younger characters has left the EU with a major hole that is going to be difficult to dig out of.

Don’t get me wrong, I have no problem with killing off characters or having them go through a hard time. The mishandling comes from not creating new ones properly to replace the characters that have been sidelined with such issues. I can’t figure out why the EU authors have had such a hard time creating new characters. It isn’t just the heroes since we’ve seen this with antagonists coming back from the dead as well. Star Wars is an amazingly vast universe and we seem to continually get the same characters we’ve been getting for 22 years. 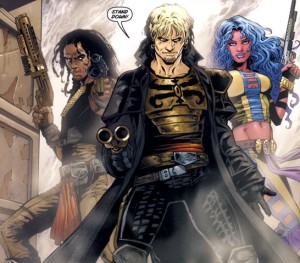 The Sequel Trilogy is the perfect excuse to start over. The authors can have the chance to do things right. They can develop more nonhuman characters. They can develop and use black, Chinese, Indian, pink skinned and green skinned humans. With the hopeful diminished presence of Luke, Han, and Leia from the ST, the authors can successfully expand on the next generation and properly surround the main characters with a compelling and fleshed out supporting cast. The EU was so successful as a story initially, not because the movies were successful, but because authors like Stackpole, Zahn and L. Niel Smith gave us books fleshing out new or smaller movie characters. Mara Jade, Wedge Antilles and Lando Calrissian really came alive in the series released by these authors. Each of them were surrounded by their own set of supporting characters who have shown up in the EU for many years following because the early authors did such a good job of creating compelling characters.

A new start is necessary because the EU has firmly entrenched itself into a hole that it cannot hope to climb out of. I look forward to seeing the Star Wars feel return to the books with the next generation of characters’ stories.