As I’ve mentioned before, my first exposure to Star Wars was the Special Editions. When they were released in a VHS box set later in 1997, each tape began with a little 10-minute featurette detailing some of the changes made to that particular film. Being brand-new to the franchise, these featurettes were my first exposure to George Lucas, Rick McCallum, Dennis Muren, and so on, and the behind-the-scenes world of Star Wars as a whole—and as such, they’ve stuck in my head in a way that weirdly eclipses their actual importance as early “bonus content”. Case in point: my op-ed category title here at Eleven-ThirtyEight, Scotch Tape and Popsicle Sticks, comes from a quote by Mark Hamill referring to the Death Star battle in A New Hope.

Another line that’s always stuck with me comes from a little later, when Lucas is discussing the dewbacks—whose presence on Tatooine was scaled back due to the limitations of the physical puppetry at the time. The formative ingredients of Star Wars’ universe, he said, were plot, naturally, his own “psychological eccentricities” (no kidding, right?), and finally, whimsy: “I wanted to give a kind of random, real-world feel to everything.” The dewbacks, he explained, were there for whimsy.

And the fact remains—though again, I acknowledge that I assign this material greater importance than it might deserve—that from the very beginning, before Lapti Nek and the Ewoks and Jar Jar Binks, Lucas felt the need to show Imperial stormtroopers riding giant lizards, because why the hell not? Even the real world is often bizarre and counter-intuitive, 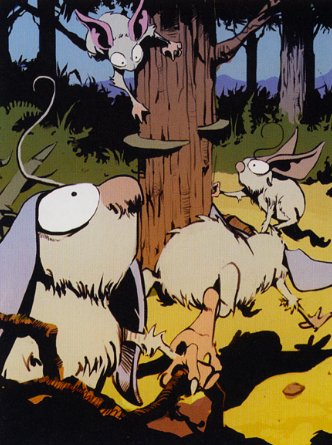 so I believe that the occasional bit of whimsy is indeed a crucial element in making the far-out world of the GFFA relatable and engrossing.

Which brings me to the Hoojibs. If there’s one aesthetic concern I have for JJ Abrams’ vision of Star Wars based on his handling of two Star Trek films, it’s that he’ll be so wary of Jar Jar syndrome that he’ll over-correct and make a slick, serious action film that forgoes the truly fantastical in favor of artificial Force-endowed gravitas. I’m sure Episode VII will be funny, but I worry about whether it’ll be fun—and looking through the expanded universe for examples, I think the Hoojibs, from late in the original run of Marvel’s Star Wars comics, would be the perfect fit.

After fleeing Hoth, the Rebels’ search for a new base eventually leads them to Arbra, a lushly-forested world whose naturally-occurring crystal formations happen to be usable as an energy source, making the planet’s expansive caverns the perfect place for a self-sufficient base. Also feeding on the crystals’ energy are the native Hoojibs, small beings whose rabbit-like appearance belies their intelligence. Not only are they fully sentient (and fully willing to join the Rebel cause), but they communicate telepathically, making them the perfect spies among enemies quick to write them off as simple pets.

Plif, the nominal representative of the Hoojibs among the Alliance, is one of the more interesting original characters in the second half of the Marvel comics’ run; while they see the Rebels as a threat at first, once Plif gets to know them their differences are quickly ironed out in a way that doesn’t happen enough in these kinds of stories, and Plif begins accompanying Luke on adventures (he can fit in the cockpit of his X-wing, after all) and proving himself a good-natured friend and an invaluable ally.

To remain true to George Lucas’ recipe for Star Wars, you’re simply going to have to put something into the Ewok/Gungan “wacky species” slot, and I believe the Hoojibs strike just the right chord—while their design, and telepathic abilities, are certainly plenty whimsical, they’re actually quite sophisticated beings, and thus they avoid the pitfall of simple-mindedness that hampered the Ewoks’ and the Gungans’ ability to be taken seriously (though we never really got to know how intelligent the Ewoks were, and I’d argue that the Gungans were actually a pretty canny bunch of beings who get thrown under the bus because of Jar Jar). Based on Plif, at least, it’s easy to hear the Hoojibs as dapper gentlemen along the lines of Paul Bettany’s JARVIS in the Iron Man films—not only is that a great subversion of the prequels’ “weird alien = kooky speech” trope, but it’s also a fun comment on the chipper British tones of Imperial officers in the Original Trilogy.

Lastly, there’s one other theme of the Star Wars films that the Hoojibs both embody and take a level further—don’t judge a book by its cover. Both the Ewoks and the Gungans (not to mention Yoda) are dismissed at first based on their seeming simplicity and unusual cultures, but our heroes’ wisdom is revealed through their eventually giving the bizarre creatures a chance, and they wind up playing pivotal roles in their respective conflicts. The Hoojibs bring that pattern forward in a very Star-Warsy way—teddy bears and frog people don’t phase you? Try rabbits. And not Jaxxon-style rabbits, either; regular ol’ four-legged bunny rabbits. While further EU sources have gone to that well a few times by now, the films have never had a quadruped for a protagonist. I think it’s time, don’t you?

At the very least, it’d give the cosplayers a run for their money.