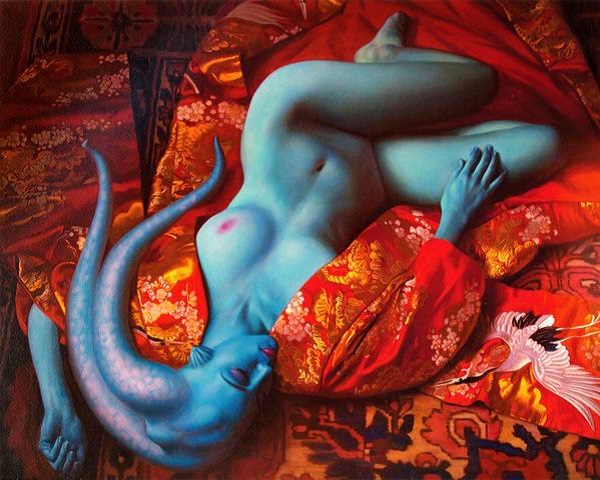 Update – Normally I wouldn’t do this, but it’s dawning on me that my attempt to thread a rhetorical needle here might have given certain people the wrong impression, and I’d rather not become part of the problem. Let me just say, with no ambiguity whatsoever: the controversy surrounding Wookieepedia’s “breast” article is a good thing, and it should remain controversial until something changes. Nobody who is angry about the article is wrong for feeling that way, and I support those people making their voices heard in whatever fashion they deem appropriate. – Mike

So, there was a bit of a kerfuffle last week. Wookieepedia‘s April Fools prank involved featuring its article on breasts on the front page, including the officially-licensed image above (by Evan Wilson, from the book Star Wars Visions) and a crudely-rewritten intro paragraph including all manner of juvenile language. In addition to taking attention away from their main joke (the introduction of a paid “Wookieepedia Pro” service, which was really kind of genius) the breast debacle ended up ripping the scab clean off of one of the site’s most lengthy and entrenched controversies—whether the article should have existed in the first place.

And I must confess, I’m not really here to talk about the controversy. I put that picture up at the top there for two reasons: one, because a certain segment of the controversy, more historically than currently, I suspect, has come from not from the article but from the nudity; from the notion that an exposed breast is harmful and obscene and has no business on a Star Wars site—and this seemed like the most efficient way to weed those people out. If the picture makes you uncomfortable, by all means, click away—there’s nothing for you here.

The other reason I began this way is because I want to explain what I mean when I say that, where Wookieepedia (henceforth “the wook”) is concerned, I can’t really say that I give a crap.

When the wook first started up, I was still writing for TheForce.Net. Despite a little tension early on with the TFN-hosted Completely Unofficial Star Wars Encyclopedia, run single-handedly by the herculean Bob Vitas, wikis seemed like the Wave of the Future back in those hale days of 2005, and I was anxious to sign up my own self. The founders, Chad and Steven, even joined me for an EU Roundtable in early 2006—clearly I was on board.

My first big project for the wook was the article for Gorm the Dissolver. He was an interesting character with only a few scattered appearances, so it didn’t seem like a huge task to piece together every stray bit of data and assemble them into a coherent and comprehensive article. It turned out pretty well, and the fact that the version I wrote is still pretty much intact today is testament to that, I would say. So a little while later, I turned my attention to a larger task: Booster Terrik.

I spent roughly a month combing through and rereading all of his appearances, primarily in the X-Wing series and the Hand of Thrawn duology, assembling stray bits of data from reference books, and piecing them together into a narrative that turned out to be roughly seven thousand words—to this day, the longest single piece I’ve ever written.

On the whole, my Booster article has remained largely unscathed as well over the years, but this time the response proved to be much more complicated. Initial reactions from the wook user base were mostly positive, but I started getting into debates with people about specific turns of phrase I’d used—most notably at the very beginning, where I described Booster as “an imposing gundark of a Human”—a subtle reference to a line of Mara Jade’s internal monologue. Actually, let me back up slightly. Here’s the entire introduction as I originally wrote it:

“Booster Terrik, an imposing gundark of a Human from Corellia, was a complicated man; depending on whom you asked, he was either a double-crossing, no-good swindler, or a noble, loyal-to-a-fault family man. What everyone could agree on, though, was that Terrik—the only civilian ever known to own and operate an entire Star Destroyer single-handedly—was anything but subtle.”

What I came to learn over the following, well, year or two, is that either you’re into that kind of thing, or you aren’t. I fought tooth-and-nail on it for a while, but ultimately, the prevailing opinion around the wook seemed to be that it just wasn’t the right tone for what was ostensibly an encyclopedia. I write the way I write—I really had no interest in adopting a passive voice, and beyond that, the rise of the Inquisitorius around this time meant more exacting standards for Featured Articles; an increased focus on citations, “Personality and Traits” sections, and so on, which I wasn’t really interested in either—I had joined the wook because I liked writing narratives, not just compiling data.

Maybe it sounds like I’ve got a chip on my shoulder about all this, but what I’ve come to accept with time was that I was wrong. Not wrong in principle, exactly, but wrong in my thinking that “open-source” meant “make it whatever you want it to be”. Wookieepedia isn’t a person, or even a group of people, who can just be convinced to change their minds or be ousted due to external pressure—it’s all of us. And as I’ve suggested here more than once, “all of us” kinda sucks sometimes.

Accepting the mantle of what some might call a “social justice warrior” in Star Wars fandom has taught me a great deal about picking my battles. Some minds really can be changed—with the right tone—but fandom as a hive mind isn’t exactly the most progressive, or even rational, democratic collective. The wook is the wonder that it is precisely because of its ability to tap into, well, the lowest common denominator of fandom. If you’re poking through it and you happen to notice that there’s no article for Drunk Sluissi #5, a bored 14-year-old is just as capable of fixing that as a lawyer or an arts administrator or a professional author.

So when the wook as a collective makes a mistake—and it was a mistake—calling on “it” to change its ways is tantamount to calling on all of society to change. Which is fine, of course, but one should be fully aware when they’re shaking their fist at the sun. That the wook would have an article about breasts is absolutely the result of sexism, but not the sexism of a few guys online; it’s the sexism institutionalized in SF/F culture that leads to breasts being needlessly referenced in novels, and given to alien species even when they’re fish or trees, therefore making them “notable” in Star Wars fiction in a way that penises aren’t. You can be annoyed that the wook as a collective uses that as an excuse to have an article on them, but according to the system they’ve established, they’re right—breasts should have an article. So it’s more productive, I think, to focus on the system.

For my part, these days I treat the wook kinda like an alcoholic treats bourbon. I’d still like to be involved (and I’ll still correct a misspelling here and there), but it brings out a side of me that just doesn’t look good, and certainly isn’t productive in the sense of making the wook better. But if you really want to change things there? You have to go and sign up yourself. Maybe you’d find the average user (and certain of its administrators) distasteful, but if you’re a genuinely productive member, they can’t keep you away. And maybe in six months or a year, enough new blood will have come in that things actually do change. Just remember that you can’t just change the wook, you have to change us.

10 thoughts to “Fear and Loathing on the Wookieepedia”