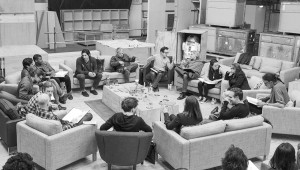 Let’s look at this picture of the cast reading. There are fifteen people in the circle out of which only three are female. That is ridiculous. There is no other way to discuss this without using a term like that. Anyone who looks at a picture like this and thinks there is something ok with it for today’s world is still stuck in the past and I am ashamed to be a female Star Wars fan right now.

Not only has Star Wars disappointed me, but so has its parent company Disney. I can’t believe that the company who has recently hit a home run with a female hero movie  with Frozen did not even try to stipulate that the new Star Wars movie promotes females. Star Wars is unique and different from other franchises in the Sci-fi/Fantasy genre. Star Trek is based on a cast created over fifty years ago before changes were made in our society. Every time they reboot they are stuck with the same cast of characters and while they have made some efforts in adding female characters here and there, the main cast is the same as it has always been: mostly men with one female. The Marvel movies find themselves in a similar situation. They are basing the movies off of characters also created over fifty years ago when women were housewives. They find themselves stuck in stories that do not feature women prominently though again they have made extra efforts to include their one female quite a bit. Star Wars on the other hand has a blank slate. They wiped out the entire EU (which let’s be honest was already male heavy) and they have the ability to write whatever storyline they want with whatever characters they want to appeal to today’s world. Instead of doing that they remained stuck in their old ways and put forth a heavily male dominated cast that has been plaguing the industry. It’s beyond disappointing.

Ok, now that I’ve vented let’s take a step back here. Many other websites released opinions right away and I don’t blame them. I felt like they did which is what I wrote above. I also decided to wait to post this because I wanted some time to digest what has been given to me and try to stick to the purpose of our site. I am excited about Daisy Ridley. She looks the part of a daughter of perhaps Han and Leia. I’m excited that she’s kind of an unknown. I have been apprehensive about so many big name actors being tossed around to be in the new movie so I like that they’re sticking to Star Wars’ mantra of using little known actors. I’m excited to see the different races represented. We haven’t managed to break up the boys club yet but we have managed to break up the white boys club. That’s a step in the right direction. Random thoughts that have popped into my head over the course of the week include that we could all be freaking out for no reason. Sort of. The female could be the star of the movie much like Jennifer Lawrence is the star of the Hunger Games despite most of the time being surrounded by more men than women. I’d be ok with that type of movie. I’m not sure if some of the press releases were deliberately only showing the new male cast or if that was a choice made by certain news outlets. For instance one of the new blurbs that came across my Facebook page said “The New Cast of Star Wars Episode VII” along with pictures of the five guys and no females at all. Maybe that was deliberate. It certainly has generated a lot of social media press for the film.

For me, at this point, I’m going to hope that there is some deliberate miscommuni-cation going on and what we’re seeing isn’t all that we’re going to get. I’m going to believe that we’re going to get a movie where the female is more than just eye candy or a damsel in distress. It is hard to be positive right now in light of what we’re seeing. I get that. If all else fails and the movies do not deliver at least we still have John Jackson Miller who has written a phenomenal female lead in the Star Wars universe before and can do it again.

3 thoughts to “Episode VII: Where are the Women?”