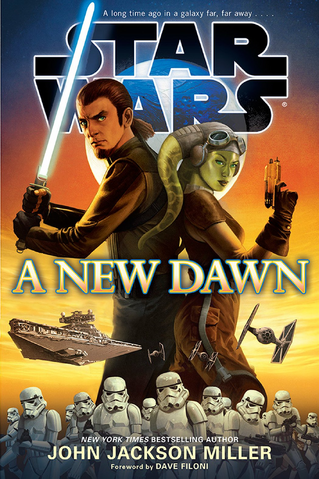 Extensive use of Expanded Universe material

As we established in a previous article, our view of the state of the new canon is that we cannot make any assumptions about the canon based on the old EU. This is the same view taken by the folks at Wookieepedia, who have implemented very strict guidelines for their “canon” series of articles – only using information directly present in canonical sources. This view is still sound, but AND provides the first real example of how the canonical universe can be populated by information from the Expanded Universe. AND makes extensive use of EU information – from galactic cartography (the division of the galaxy into the familiar Core, Colonies, Inner Rim, etc.), to the name of species (never fear, the hammerhead aliens are still Ithorians) and most importantly (to us), the Imperial Court still exists and is ever a hotbed of aristocratic intrigue.

Before anybody says “I told you so” – the use of certain background information from the EU was never truly in doubt. The only question was how much of it would be used, and where. From its initial announcement, it was clear that Rebels would be using EU material in order to flavor the setting (Sienar Fleet Systems, the Imperial Security Bureau, the Imperial Inquisitors) but nobody knew how that information was going to be used. Now we know – in part. We remind people that just because a thing is referenced doesn’t mean that it’s going to be used in the exact same way that it was used in the EU.

There’s still hope, though. The sequel trilogy will last years, and the current crop of books is just the beginning. In time, the canon will become populated with a great deal of familiar (and perhaps new) background information – it may not approach the depth and interconnectedness of the old EU at first, or perhaps ever, but it may capture some of it in time. As the Powers That Be never fail to remind us – the EU is not truly gone. We can hope that in time, it exerts a great deal of influence on the new canon – a canon that shed the EU because it had to, not necessarily because it rejected the EU.

A New Dawn reads like a normal EU novel – that means that there’s not much in the novel that would have proven problematic in the old EU, and not much that contradicts the old EU (there are tidbits here and there, perhaps a quote or two about the age of the Old Republic that might distress a few continuity-minded fans). More than that, it reads like we would expect a Star Wars novel to read. Depending on a person’s perspective, this can be a good thing or a bad thing. We can’t possibly speculate how a new reader might take this, but a regular EU reader should certainly feel quite at home.

The more things stay the same, the more they change

However, just because it reads like a good old Star Wars novel doesn’t mean that it follows in the well-worn tracks of the EU. There are several ways in which the novel sets itself apart, which – if representative of future novels – could bode well for the future.

Let’s start with the Empire, since I couldn’t very well start with anything else. The Empire of AND is the familiar Empire of old, but recast to make it more interesting and compelling. The sense of oppression, the dangerousness of speaking out, the disregard of peoples and persons – those are there. So too is the sense that the Empire’s evil is an incremental evil, one that carries people along with it bit by bit and makes them go further and further down a dark path without even realizing it. The reader gets the sense that the combination of oppression and quiet, mundane evils is exactly why the Rebellion had so much difficulty getting started in the first place: it’s too dangerous to speak out, and besides the Empire only bothers other people. It’s a long way from the cartoonish evil of some old EU depictions of the Empire, without falling into the slippery and questionable “grey” morality of the modern EU.

That’s not to say that the Empire isn’t colorful or interesting. Far from it – the new Imperial villain, Count Vidian, is a creative sort of antagonist that is inspired by the corporate efficiency gurus of today. Though the character is clearly inspired by a contemporary phenomenon, his goal of helping the Imperial economic order pull itself out from the slow, bureaucratic morass of the Old Republic feels like it fits perfectly into the time and place of the novel. He’s not the usual militaristic villain that we tend to see in these novels. He’s a favorite of the Emperor, a middling figure at court hoping to improve his standing among the Emperor’s advisors through economic wizardry – and if innocents have to perish while he accomplishes his goals, well that’s just the price they have to pay for his success. It’s a callous, selfish sort of evil rather than a galactic tyranny but it shows that the Imperial system enables such villainy.

The actual Imperials accompanying Vidian are also refreshing. The novel’s first chapter opens with the perspective of Captain Rae Sloane, a dark-skinned female Imperial officer. It’s a rare sort of thing in the EU for a character to look like a real-life minority, and rarer still in the Empire – so little things like that, unrelated to the story, are appreciated in the new canon. Sloane reached her rank by merit, and she is far from the only female Imperial in the story – there are several female stormtroopers (including one who appears to be leading her squad), a female comms officer, and a female head science officer. We’ve discussed the dubious basis for Imperial sexism in the old EU at some length, so it is very gratifying to see the new canon start off with many female Imperials who reached their position through talent rather than the bedroom. That these roles run the gamut from command, communications, combat, and science is also appreciated, since it avoids needless stereotyping. And while we don’t want to spoil any of the plot for anyone, we have to say that Captain Sloane is easily our favorite character in the story and we hope to see more of her.

There’s not much we can say about the Rebel characters without getting into plot spoilers, since they are the central drivers of the story. Suffice it to say that the characters of Hera and Kanan proved to be more interesting than we expected. Their motives and means of resisting the Empire are different, and they’re handled deftly and maturely. There are no trite calls for freedom for freedom’s sake, or adolescent anti-authority screeds – the morality is not grey, but it is also not simplistic. Hera and Kanan decide to fight the Empire not because they hate government, but because of what the Empire does – or allows others to do in its name. Their means and methods are also thought out – if Rebels is even half as mature, we’re in for a good show.

The Future is Bright with A New Dawn – we hope

So A New Dawn accomplished what it should have, in our view. It reassured us that the old EU would be used appropriately, and that the vast Star Wars galaxy would not be reduced to just the films and television shows. It also showed us that the new canon was comfortable adjusting aspects of the EU that were not as well-handled or as sophisticated as we would have liked. It leaves us justifiably optimistic for both Rebels and the rest of the EU novels: provided that the changes we identified were intentional, and provided that the TV and novel writers follow in JJM’s footsteps. Only time will tell, but we have a reason to be hopeful now.