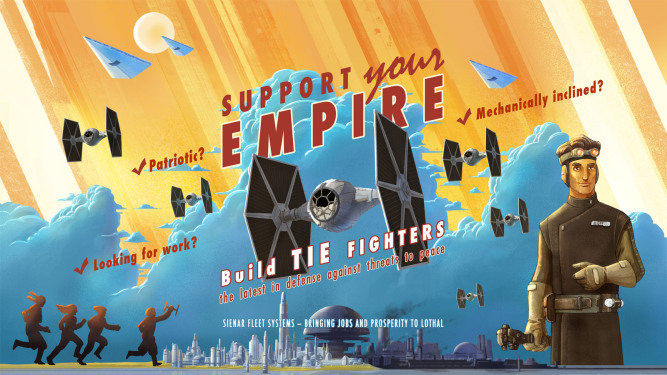 This past summer, Del Rey released a “sampler” of its first four post-reboot Star Wars novels; those excerpts from A New Dawn, Tarkin, Heir to the Jedi, and Lords of the Sith were our first glimpse at the new canon, or New Expanded Universe if you will. Rebels was still a couple months off, but bits and pieces of promotional material had already revealed that Sienar Fleet Systems and COMPNOR, among other elements of the Legends EU, were nevertheless sticking around. Between those bits and the assorted references in that Del Rey sampler, there was already enough EU showing up that we thought it would be fun to count down to the release of A New Dawn with a special Twitter hashtag, #EUPurgeSurvivors, highlighting a different EU escapee every weekday for a month or so.

We did the same thing in the lead-up to Tarkin, and the plan at first was to keep the practice going with each new release, as the “survivors” continued to accumulate…but then we started actually reading Tarkin. As our respective lists crept into the range of one hundred entries—including literally dozens of EU planets, and in some cases weird situations where the Bilbringi Shipyards, say, were canon but not necessarily the planet Bilbringi itself—it started to appear that maybe a new paradigm was needed.

Shortly after the reboot, we ran an article entitled “What’s a Duck?” which attempted to make sense of the Legends/EU decision and whether it truly constituted a reboot. We proposed a worst-case scenario where familiar concepts, worlds, and characters from the Legends EU could be mentioned and readers would have no idea if those mentions coincided with what they were familiar with. We bought up this scenario to remind people what the Legends decision could actually mean, though it appears this worst-case scenario has really not come to pass.

Just looking at the galactic map alone, we’ve got, again, dozens of surviving planets (and/or systems, and/or sectors), plus the Unknown Regions, plus the Perlemian, Hydian, Rimma, and Triellus hyperlanes, and as least the general outline of the preexisting Core/Expansion/Rim geographic dynamics; at a certain point it’s hard not to conclude that the canon galactic map is effectively (if not completely) the same.

And if the map is the same, for all intents and purposes, it’s the same universe. This is not a wholly new Galaxy Far, Far Away with elements from the EU peppered in; this is the EU GFFA, plain and simple.

The approach we’ve seen in the new canon books, games, and Rebels tells us that we can safely assume a lot of background worldbuilding is still there, even if it’s not canon until it’s actually used. We might no longer know what Corellia is, but we can bet that it’s rather more like the EU’s Corellia than some vague undeveloped world. The authors, game designers, and TV creatives have shown ample interest in using the EU, and though things have definitely changed they haven’t changed too drastically.

Still, we can’t make any assumptions. We can assume Corellia is a world famous for shipyards and smugglers, whose inhabitants have a particular disdain for odds, but we can’t assume that the Diktat was the Imperial ruler or that CorSec was the local police force. They probably still will be, but—we don’t exactly know. Our uncertainy gets stronger when it comes to story elements, since past stories are not canon outside of references. Nobody named Horn has been mentioned yet, but if we learn about a “Hal Horn” in Rebels, will that mean he has an adopted son who’s Force sensitive? Not unless we’re told that, and since it’s a story rather than worldbuilding element we’re talking about we can’t make assumptions.

Speaking broadly, though, the new status quo appears to be one in which the worldbuilding of the EU remains 90% intact, whereas the plot elements of the EU are likely closer to 10%. Thus far, the only real examples of the latter are Tarkin‘s references to the events of Luceno’s prior books Cloak of Deception and Dark Lord. At a glance this seems to belie the ten-percent notion, but just because the references resemble events in those books doesn’t mean they’re safe in their entirety, and it’s doubtful that anyone will be in a hurry to nail down more of that kind of thing than they absolutely have to. But to save simply the planet Murkhana, on the other hand, all Luceno had to do was go there again—and as he said himself, if it fit the needs of his story, why wouldn’t he?

Ultimately we’re still in a weird place. The infrastructure of the EU is probably there, but invisible. The histories and stories are more up in the air, and the closer they’re intertwined the fewer assumptions we can make. For now we have to wait and see: once the movies start coming out, we can imagine that there will be a lot more story being pinned down and solidified than right now.

Bria, a writer for our fellow fan blog Tosche Station, recently coined the term “shadow canon” to describe the plethora of EU material that Tarkin alludes to without entirely recanonizing, and we feel like this is a good paradigm for the current status of most Legends material; to quote Luceno again, “writing around [the EU] rather than trying to overwrite it.” In a way, this should be familiar to fans of Marvel’s Ultimate Universe—in those series, you didn’t see major characters like Apocalypse or Mysterio until several years in, but sooner or later they were bound to show up. In the new Star Wars canon, prominent characters like Daala or Bel Iblis or Grand Admiral Thrawn may not exist in the form we already know, but they have enough cachet with fans that there’s still no convincing reason to think they’re not out there somewhere; and the fact that it’s a new universe means this would be an excellent opportunity to update them, streamline them, and smooth over any wrinkles they may have developed over the years—just like Marvel did with the Ultimate books.

In the end, as we see it, #EUPurgeSurvivors was a kind of victory. It’s time for EU fans to shift their perspective away from checklists and onto the potential for exciting new versions of familiar EU elements—and maybe even stories. A Rogue Squadron TV series, for example, would never have matched perfectly with the continuity of the book series; but now that there’s no need to, the potential for such a show to exist—and be extensively informed by the books just the same—is actually way higher. Isn’t that worthy of our optimism?

And last but not least, we shouldn’t really worry about continuity problems in the long run: the bigger concern right now is the quality of the storytelling and the products we’re receiving. The new canon started off on a high mark, but subsequent contributions might be more questionable in quality. That’s the bigger concern, and it dovetails well with the concerns people had near the end of the EU’s run. At the end of the day it’s the quality of the product that matters, since the worldbuilding and continuity will work themselves out—they always have.