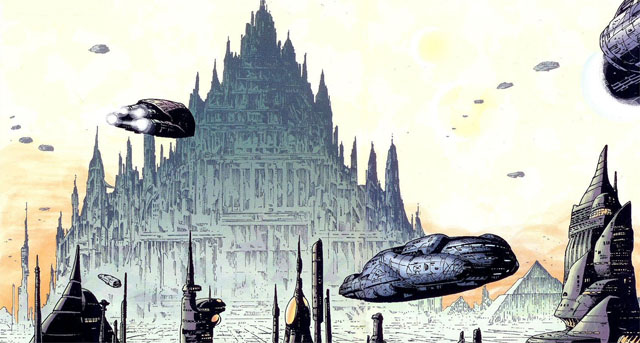 While we’ve spoken here at great length about the extent to which the canon version of the Star Wars galaxy has remained the same as it was before the reboot, one of the benefits of being an Expanded Universe junkie these days is that when changes do show up, even subtle ones, they stand out. And buried amidst Tarkin‘s onslaught of EU references and allusions was one definite change: five years after Revenge of the Sith, Palpatine is living in the Jedi Temple. His personal quarters, in fact, are more or less in the Jedi Council’s living room.

Early in the novel, Tarkin visits Coruscant after an extended absence. While being escorted inside by Mas Amedda, whose position in the early Empire Jay has already discussed, Tarkin reflects on the aesthetic, almost cultural, shift since his last visit:

“Tarkin was familiar with the interior, but the expansive, soaring corridors he walked years earlier had contained a rare solemnity. Now they teemed with civilians and functionaries of many species, and the walls and plinths were left unadorned by art or statuary.”

While it’s not completely explicit that it’s his first visit since the rise of the Empire, his reflections seem pretty clear—the place he’s walking around in was indeed the Jedi Temple.

Now, in Legends, the Imperial Palace had typically been depicted as the sprawling McQuarrie-inspired monstrosity seen at the top of this piece; a building the size of a city and undoubtedly the biggest thing on a planet full of big fuckin’ things.

So if it’s the Jedi Temple now, well, that’s a very different picture. Still ostentatious, sure, but not exactly the bright center of the universe. But then, there were bound to be differences after the reboot, so no reason to fret, right? Well, no, but things don’t seem to be quite that simple. See, when Tarkin is first landing on Coruscant, in “a courtyard landing field […] large enough to accommodate Victory- and Venator-class Star Destroyers”, his internal monologue is as follows:

“As repulsors eased the ship down through the busy skyways and into the court, Tarkin realized that the Emperor’s current residence had once been the headquarters for the Jedi—though practically all that remained of the Order’s elegant Temple complex was its copse of five skyscraping spires, now the pinnacle of a sprawling amalgam of blockish edifices with sloping façades.”

Tarkin, who’s been working amongst the galactic oligarchy for decades and served personally alongside the Jedi any number of times, doesn’t even recognize the Temple at first. And when he does, he observes that the spires are “practically all that remain”. Let’s look at that last bit again: “…its copse of five skyscraping spires, now the pinnacle of a sprawling amalgam of blockish edifices with sloping façades.”

Maybe I’m biased, but that sounds a lot like the old Palace to me. It appears that the Temple as the Jedi knew it truly doesn’t exist anymore; either the bulk of it (and likely the entire neighborhood) were completely built over so that only the spires remained poking up into the sky, or even more drastically, the entire building was effectively disassembled, with the spires being raised in their entirety to the top of a building more closely resembling Ralph McQuarrie’s design.

Another wrinkle comes in the form of another recent release, The Rebellion Begins by Michael Kogge—an adaptation of the premiere of Star Wars Rebels. Kanan, reflecting on the Temple, considers that “[nothing] of it remained on the world now known as Imperial City. Not a museum, not a plaque, not a mark. The Empire had reduced all its brick and steel to dust.”

That “world now known as Imperial City” thing is kind of odd, but that’s another story altogether. What interests us here is Kanan’s understanding of the Temple as being entirely destroyed. While on its face this seems to contradict Tarkin in no uncertain terms, there’s plenty of wiggle room given that it’s the internal monologue of a character who in all likelihood hasn’t seen Coruscant in person in a long time. Given Tarkin’s brief failure to recognize the building, it’s even possible Kanan saw an image of the Palace at some point and concluded that this building had replaced the Temple entirely rather than simply swallowed it—if it is indeed a building on the scale of the McQuarrie Palace, the Temple spires would barely be visible when taking in the entire structure.

So that’s where we stand: the Imperial Palace is where the Temple used to be, and the spires are either all that remain of the old structure, or at a minimum all that’s plainly visible from outside—surrounded as they are by “blockish edifices with sloping façades.” Which brings me to the real issue here.

George Lucas has, as we all know, made several rounds of changes to the original Star Wars trilogy. When it was released on DVD in 2004, in what you might call the “Prequel Edition”, a number of the changes were specifically intended to reflect visuals that weren’t available when the Special Edition came out; a much-improved CG Jabba in A New Hope, a scarred-up Ian McDiarmid in Empire instead of that weird monkey lady, and notoriously, glowy Hayden Christiansen instead of middle-aged Sebastian Shaw in Jedi. More subtle, though, was the insertion into the Coruscant celebration scene of the Galactic Senate, which we know per ANH was no longer in use, and the Jedi Temple, which, well.

At the time, the notion that Palpatine would’ve left the thing sitting there for twenty-odd years seemed unusual to longtime fans. Subsequent EU wasn’t totally sure what to do with it, either, and the few times it was referenced and/or visited during the Dark Times depicted it as an empty husk; left standing as a trap for wayward purge survivors, and as a permanent reminder for everyone else of what happens when you cross the Empire.

But that was then. Those EU depictions no longer matter, now, but that shot in Jedi? That’s still there. While there is the slightest hint of a McQuarrie-esque pyramid off in the distance, what we we’re looking at is the regular ol’ Jedi Temple, plain and simple. The building is basically identical to the asset used in the prequels (and lit up, even), and not only is it surrounded by the same mostly-flat cityscape seen in the prequels, it even appears to be closer to the surface than the neighborhood in the foreground. What we’re absolutely not looking at, though, is what’s described in Tarkin.

So what does this mean? Well, we have a few options. The first is that it’s a giant, glaring continuity error—the first serious one of the new canon, and only a few months in to boot. The Story Group got together with James Luceno and hashed out the details of this canon Imperial Palace, completely forgetting that we’d already seen an intact and not-particularly-majestic-looking Temple in Jedi. Oh, and somewhere along the line Michael Kogge got a confusing e-mail or something and got the impression that the Temple was utterly destroyed.

The second option is that what we see in the background of Jedi is indeed what the Imperial Palace looks like now, and Tarkin just does an abhorrent job of describing it—or, more forgivingly, it was decided that that shot is distant and unimportant enough to handwave the fact that it doesn’t look precisely like it’s supposed to. That still leaves the question of what Kogge was thinking, though, and the question of why they went to the effort of changing this particular thing at all.

It is my sneaking suspicion—and only that, because I really don’t know more than anyone else does and my idle speculation has been horribly wrong before—that we’re dealing with a third option: that shot, like Legends, is no longer canon. Or to put it another way, they’re undoing a Lucas edit.

Do I think they’d outright revise the entire trilogy all over again? Not really. These aren’t fans sitting at home, these are people that actually work for Lucasfilm, and in many cases, worked with George Lucas personally. They don’t see it the way we do, and they’re not going to fiddle with things just because they can now. So why would they change this? Well, another new piece of information, or at least a revision, to come out of Tarkin is the news that the Temple was built over an ancient Sith shrine:

“That the Jedi had raised their Temple over the shrine had for a thousand years been one of the most closely guarded secrets of those Sith Lords…even the most powerful of the Jedi believed that the power inherent in the shrine had been neutralized and successfully capped.”

And when I say ancient, I mean potentially pre-Republic. While there have been a number of canon references to the Old Republic existing for only a thousand years rather than Legends’ twenty-five, there have also been—in Tarkin, even—one or two references to galactic society having existed for a “thousand generations”, so what exactly was going on more than a thousand years ago is completely unclear, save for the fact that Jedi were around and there was interplanetary governance of some sort. Which makes this line, as far as I can tell the oldest specific date yet given in canon, even more interesting:

“Save for Sidious, no sentient being in close to five thousand years had set foot in the shrine.”

Call it a gut feeling, but James Luceno isn’t the most grandiloquent author in the Star Wars roster—I don’t think he’d say “five thousand years” like that just for texture; I think that was him alluding to something.

In that, I’m not alone. Both Brian at EU Cantina and Making Star Wars have commented on the Tarkin shrine and its potential relationship to The Force Awakens. I don’t follow spoilers as closely as MSW does, so I can’t begin to characterize their theories where TFA is concerned, but the potential reversal of any Lucas edit would be a pretty big deal, and the plot requirements of the sequel trilogy would be a pretty solid reason for it—as solid as it gets, anyway. So no, I don’t think this Temple/Palace thing is an accident, nor do I think the shrine is incidental.

And who knows? Precedent is a funny thing—Han might just shoot first again someday.