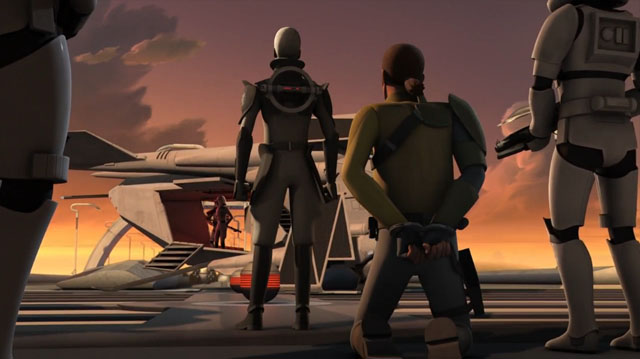 Ben: Rebels has been a show made up of character moments and slow burning plots thus far. Many episodes have avoided doing any action that seemed massive or important in the long run in favor of dropping hints about things outside of their scope and giving us character moments and development. This storytelling strategy has been paying off in recent weeks as a number of those hinted plots have started to tie together in close succession, each one bringing more drama to the characters we have gotten to know without seeming overwrought or premature.

The storytellers have, in essence, been playing poker with the audience. Each week they play a hand, laying small bets, a plot point here, a character moment there, while teasing a much larger pile in their corner of things yet to come. From time to time, they have raised the stakes, pushing more “chips” into the pile, but not going so far as to exhaust their entire stash of hints and ideas, or to push the audience into giving up the game. Teasing a story out is a hard line to walk for any show; say too much and the drama fizzles early, say too little and the audience gets frustrated and bored.

“Call to Action” is the latest, and most defining, chapter in that ongoing payoff. While they haven’t gone all-in with their stash quite yet, a substantial raise in the stakes was made. Two visible, prominent characters were killed. Another was captured. The danger quotient rose considerably, as Grand Moff Tarkin made clear that failure to bring the Rebels to heel would simply not be tolerated. And none of it felt strained, overly dramatic or too dark. It all flowed naturally from events we already witnessed or things we heard from the very beginning of the season.

The flow of the drama is natural enough that some have even questioned whether Kanan should make it back from the Empire’s clutches to rejoin the Ghost. While his death may be a tad premature at this stage, even were it to be drawn out until the season’s finale, the fact that it is an option on the table worth considering shows that the stakes are high, enough so that the death of a main character would not be absurd. It is a credit to the show’s writing staff that the season that started with Ezra and Zeb stealing fruit from an Imperial convoy has built on itself to this point, and promises to go further.

The difficulty will be in that “further” part, of course. With the stakes so high, where does the show go from here? Does it restore the status quo, as most shows do, return Kanan to his crew somehow and bring things back toward the way they were before? Or do they follow through all the way, forcing a change in the fundamental way the show works in a major capacity? Both are options, one is safe, the other more daring. Is the show willing to take that sort of risk?

Taking a step back, let’s ask a more important question: is the show ready? Is it ready for one of its most prominent characters to die? Are the characters in a position for that sort of development to occur? Or is there another way things can be resolved without having to renege on the bet they placed in front of us at the end of “Call to Action”? With how deftly the show has handled its own plotting thus far, it would not be a surprise if there is another path in store, but what it might be is very open to speculation.

Perhaps the Inquisitor maims Kanan somehow, leaving him crippled and forcing both Ezra and Hera to step into some of his role within the Ghost’s crew. Perhaps he remains a captive and is shipped off-world to somewhere else, a prison like the Spire or Stygian Prime, interrogated for the secrets he might know, broken into a tool for the dark side to use. Perhaps Ezra, lost without his Master, is forced to seek out another teacher from somewhere in the depths of space beyond the Empire’s reach. Perhaps none of that happens, and the Ghost’s crew manages a daring rescue of him from Tarkin’s clutches, but in the process, someone else is hurt, or even killed. Perhaps a couple of these things happen in conjunction, perhaps none of them do.

Playing their cards the way the Rebels crew has is effective storytelling because it teases the audience enough to keep them invested and looking forward to the show from week to week. By letting the stakes build naturally over the course of the season, the show has built its own drama without forcing it, giving the characters and plots strong foundations and then using that to climb upward in an effective way. How those stakes play out is going to be the next big challenge, whether the build-up is all for nothing or for something worth watching, whether the show climbs to the summit or plummets to the ground. 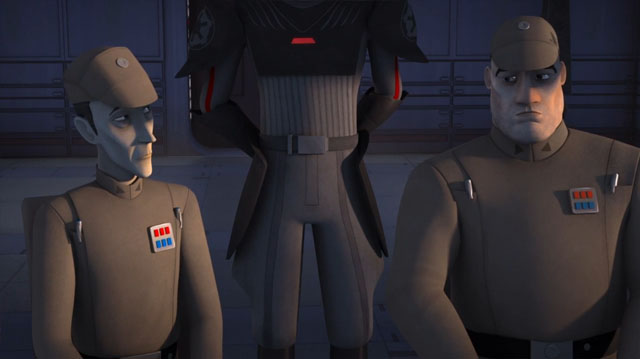 Jay: We’ve discussed at length how the show has been very careful and methodical in how it presents the plot. The action is mostly on Lothal, and several episodes were devoted to mostly character growth. If asked whether any significant events have happened on this show, we might be able to mention a few: the interception of the disruptor shipment, the destruction of the Empire’s prized TIE prototype, etc. If asked about the individual characters and what we know about them, we would be able to say a lot more. That’s the show’s strength: in a few episodes, its ensemble cast has gotten enough development for the audience to know them fairly well. As Ben said, that means the stakes are high enough for a dramatic payoff: a character death, maiming, or disappearance.

Ben asks if the show is ready. I think it is, because we’ve known Kanan well enough to have his death matter. I’d like to add on to that question and ask a related followup: will Kanan’s death matter, and will it serve a useful narrative purpose for the show? My answer to this followup is the same.

Kanan’s always been in a difficult position. Despite being untrained and unsure of himself, he’s still too good. His presence helps make the crew seem invincible, even when it isn’t. But the strength of his presentation, as well as the reliance the crew has on each member of the team, has made it so Kanan isn’t so much of a crutch. That’s good, but I do still think the characters will grow without him.

Kanan’s done his job very well. He’s helped Ezra deal with his demons. He’s helped Ezra believe in something greater than himself, something that he and Hera can jointly take credit for. Ezra needs to be more than a goofy sidekick though, and he can only do that once Kanan’s out of the picture. It’ll be very hard for Ezra, especially since he’s finally come to terms with what it means to be a Jedi and what his role on the squad should be. It may very well destroy this precarious certainty that Ezra’s built. I say good! There’s no place for complacency.

This isn’t to say that I don’t like Kanan. Far from it, I think he’s an excellent character and he’s been written and acted well enough to satisfy all my concerns about having a Jedi on the squad. But it’s those very strengths that mean his death could be very significant, and it could help launch this show into the stratosphere. It would be a very bold move, but I think it’ll be a welcome one. Take him out on a high note, in a blaze of glory. It’ll be amazing.