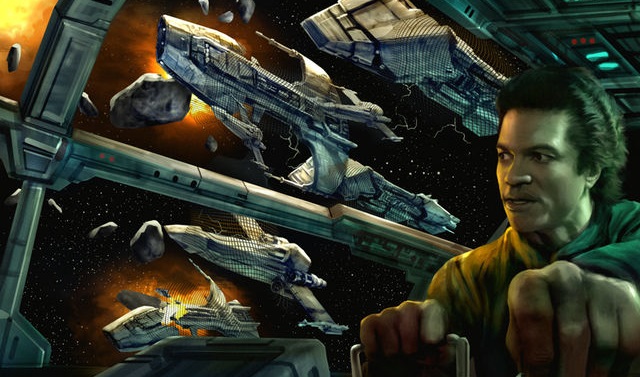 Moving on—the other weird thing about this piece is that I couldn’t quite decide whether to bill it as an Expanded Universe Explains or an Escape Pod, for reasons that will become clear shortly. For starters, though, let’s talk about Taanab. Originally referred to, of course, in Return of the Jedi, the “Battle of Taanab” was a conflict that for some reason involved civilian (and scoundrel) Lando Calrissian back before he got mixed up with the Rebellion. When he was awarded the rank of General despite seemingly no military experience, he speculated that Alliance leadership must have heard about his “little maneuver” at Taanab.

But we all know that already. And until Star Wars Adventure Journal #5 in 1995, that was all we knew about it. An item in the Galaxywide NewsNets feature titled “Norulac Pirates’ Latest Raid on Taanab Turns to Rout” offered the first official explanation of the events of the battle, which were as follows.

Lando was drinking in a cantina on Taanab (I imagine many of Lando’s stories start that way). Taanab was a minor agrarian world that didn’t warrant much Imperial attention (also key to many Lando stories), and was thus a frequent target of pirates. The Norulac Freebooters show up in the system, and Lando, taking stock of the situation, declares that he’ll go fend them off on his own, like you do.

He takes his freighter, Mama Tried (thank Jason Fry for that one), out near Taanab’s moon and hides there until the pirate fleet comes into range, then jettisons his cargo of Conner nets right in their midst. Conner nets are huge electrified nets used by pirates to disable and capture ships unharmed, and because aiming is overrated in the Star Wars universe, they make short work of most of the pirates. The remainders are quickly taken out by Taanab’s piddling defense force and Lando himself, using ice from the moon as projectiles with his ship’s tractor beam.

It’s pretty straightforward—and aside from one jokey reference in the satirical Tag and Bink comics, that version of the story has stood the test of time. But the funny thing is, most of what we know has come out of Lando’s mouth—the Essential Guide to Warfare draws extensively from the Adventure Journal item, but frames it as it’s meant to be: an anecdote, not an omniscient historical account. And, of course, even Lando doesn’t know for sure that it had anything to do with his being made a General; he’s just thinking out loud.

So what makes this worth bringing up now?

The thing about Taanab is, it’s not even that interesting of an anecdote. Even if you take Lando at his word, the man isn’t exactly Thrawn; he just so happened to have a freighter full of nets, and after that he threw some rocks at them. But it does have some cool visuals involved—the electrified Conner nets, the lunar ice ring from which Lando secures his ammo, and of course the motley collection of both planetary defenders and pirate ships (including one of my old favorites, the Marauder-class corvette). It’s a big skirmish by civilian standards, but not the kind of thing where you’d ever genuinely worry for Lando’s well-being.

In other words, it’d make the perfect Star Wars Rebels episode. This is where the Escape Pod part comes in—I think now that Lando’s an established part of the Ghost crew’s world, some version of the Taanab story (which is mostly known of by word-of-mouth anyway, to say nothing of being Legends now) would make a great fit for a future season of the show. Taanab itself is a sparsely-populated farming world (sound familiar?), so the designers wouldn’t have to go overboard in creating new assets for the planet itself. The Freebooters’ starfighters are Z-95 Headhunters, which already exist in canon (and Lucasfilm Animation’s libraries) thanks to The Clone Wars. The pirates’ other known ships besides the Marauders are Action IV transports, very close kin to the Thrawn trilogy’s Action VI, which is also already canon thanks to a cameo in Attack of the Clones. Mama Tried, meanwhile, could be anything—as could the Taanab defense forces.

But that’s just technical stuff; more important is that the story seems right up Rebels’ alley. In addition to being more visually interesting than your average space battle (oh, and an ice moon would be a fun way to invoke Cynda from A New Dawn, as well) pirates are a solid second-tier adversary to expand the galaxy and keep our rebels busy after Darth Vader sends them running in terror from Lothal, and there’s any number of ways they could end up on Taanab with Lando. Speaking of A New Dawn, that book ended with Kanan and Hera dropping Zaluna Myder off on an unnamed grassy world—maybe they’re paying her a visit? Or maybe Lando hires (read: cons) the crew to transport the nets there, and for some reason Hera’s out of commission when the pirates attack, so Lando borrows the Ghost and fights them off himself. What better way to escalate the hilarious tension between Lando and Hera than for him to pilot the Ghost without asking permission? And after Lando wins the battle, well, not only might Hera forgive him, she may even tell her future superiors in the Alliance about his manuevers someday.