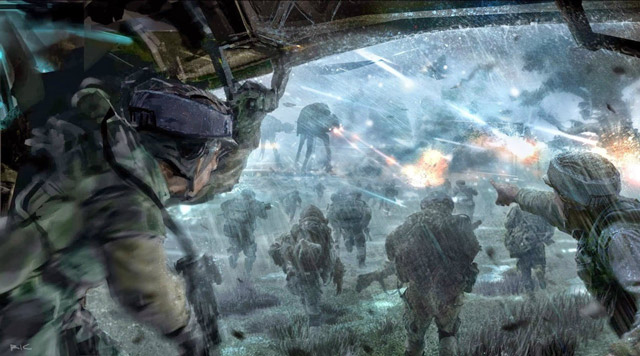 With the recent terrorist attacks, I’ve been noticing an increased amount of online belligerence regarding matters like the Islamic State. The line tends to be that ‘we’ should do more, but rarely goes further to say ‘what’ that is and what ‘our’ ownership of it and the consequences would be. At the same time the recent release Lords of the Sith attempted to ask what committing to a rebellion actually means and what guerrilla warfare entails. Some found the notion of a Rebel cell ambushing Imperial medical personnel disturbing, which I’d be inclined to say was the point. But they’re medics, you object! Yes, but they are also medics who patch up the stormtroopers and play a role in keeping the Empire going. Does that mean they deserve death? Deserve likely has little to do with it!

Ever since the first Gulf War, politicians and generals have tried to sell the idea that war can be somehow rendered more civil, more clean. Smart bombs will only kill the bad guys, their shrapnel won’t hurt anybody who doesn’t deserve it. It’s a nice picture, but an accurate one? Not really. The problem with accounts of war, as I’ve found when reading World War II accounts, is what they depict is unimaginably vicious. Not even the best and most skilled film-making will bridge that indefinable gap between fiction and reality. It can be argued it should not try either.

In the end though, I am a civilian, I have not, nor would I ever have the skills to, go to war. At least not without being a liability to everyone else! In this strange world of more restrained media reportage of real wars, while entertainment creators strive to render war in their stories more accurately, I wondered what someone who has been to war would make of all this. I asked a poster on one of the message boards I’m active on if he might, as a military vet, be interested in doing a brief Q&A. He was, on condition of remaining anonymous. My thanks to him for his time and answers.

Q1: On a couple of past Star Wars series, the marketing made mention of being more realistic in its depiction of war – do you think that can ever be accurate or would you see it as marketing rubbish?

Marketing rubbish. Star Wars is Science Fiction Fantasy. The idea that a PG or a PG-13 rated Star Wars film (or a similarly-rated video game, TV series, etc) could ever hope to portray war with any amount of accuracy is at the very least silly, at most it’s vaguely insulting. Just by virtue of the facts that there is no blood, the screams of the injured and dying aren’t blood-curdling and horrific, and that no one ever seems to look scared, the idea that Star Wars could/would ever portray combat realistically is asinine.

In light of the announcement that the Rogue One film will be the grittiest SW film ever, I have to wonder at that. I didn’t care for how some sequences in Revenge of the Sith decided to depart significantly from the universal audience SW had been aimed toward. It’s notable that that got a 12A rating, compared to U/PG for its predecessors. At the same time, the Rebels series has been criticized for being too safe, but could perhaps be said to be going back to that widespread, universal appeal.

Q2: Film SFX tech keeps developing, which allows directors to show more and try to be more realistic, but based on your own experiences do you think they should do so?

SFX has nothing to do with realism, unless the FX are so incredibly advanced that they can portray realistic violence in such a convincing manner that no one could tell the difference between real life and movie magic. If a director would attempt to use special effects to make the imagery more true-to-life, I would imagine the best place to start would be to make CGI blood look a lot less like CGI, or maybe by adding CG sweat droplets to everyone’s foreheads. The closest I’ve ever seen to CG being used realistically AND effectively in a war film would be in Black Hawk Down…maybe Saving Private Ryan or Generation Kill would be good examples of that as well. In a Star Wars film? I don’t think it would work as well. I think Star Wars needs to keep itself away from the idea of a realistic portrayal of war/combat, because the heart of those films is in the story, the characters, the FX, and the fantastical nature of it all. Realistic portrayals of war, no matter how advanced and accurate the FX might be, don’t belong in what is essentially a children’s fantasy series.

I’m now wishing Rebels was more easily available to me in the UK – the choice is Amazon or bust and I’m not a fan of said corporate leviathan! What gives SW a great deal of its flexibility is the idea of war as backdrop and not story style determinant. This is in spite of a literal tendency in recent years to say: Well, it says Star Wars, so where’s the war?
_______________________________

Q3: No matter how carefully it may be approached, I suspect there will always be a fundamental gap between how war is depicted in stories and those who have seen it firsthand. I think there’s a ‘being there’ aspect that can’t really be bridged – what would your take be?

There is and always will be a “been there” aspect for vets watching portrayals of combat/war. I check my brain at the door in this respect when watching semi-violent Sci-fi and/or fantasy, because the very nature of the world(s) being portrayed are, by their very nature, unrealistic. If I see someone get shot by a laser gun, it’s not going to make me flashback to Afghanistan, or anything. Hell, if I see Jason Bourne cap a guy with a pistol, I probably wouldn’t feel anything, either. If I were, however, watching Generation Kill, and I saw someone get shot, my brain takes me into the story and begins to analyze every aspect of the scene, from the costumes to the props to the situation/context of the scene within the story.

One of the things that is fun about fictional tales is it allows the reader to indulge themselves – who doesn’t like a lot of Vader’s lines? Sure, he’s galactic despot but those lines are cool! The common error made here is to make too much of that, to assume people only have one style of looking at a story, that they don’t change that depending on the style of it. Or that if someone thinks X about SW then they must also think the same about a real war. On that basis I’d end up breaking the game completely as I’m quite left-wing in my politics but am also a big Judge Dredd fan. Go square that circle!
__________________________

Q4: Do you think people online can be too quick to advocate war while not recognizing what it requires and demands of those who have to wage it? Is there an unrealistic level of expectation placed on the military by an ignorant public? (Might be a big US-UK difference on this one.)

The answer is yes, I do think there are many in the public who are quick to jump up at the prospect of military conflict and advocate it…loudly. Most of these people will never wear a uniform, incidentally, and if they do, they’re more than likely POG’s (personnel other than grunts) who will spend a majority of a military conflict behind a desk. I understand the weird excitement that the prospect of armed conflict generates. There’s something kind of sexy and alpha-male about the idea of violence and aggression on a mass-scale. Most of the loudmouths who declare war online in places like, say, a comic book message board, have no real-world experience that can and should inform their opinions. Most are under-educated with regard to the realities of warfare, and those that are educated generally get their information from books, news reports, TV News, and other outlets that can show and tell a story, but cannot properly convey true, abject horror. Given this, it’s always annoying when I read calls to arms, particularly as those calling for conflict will almost never actually engage in it themselves. There’s this weird thing in America where the citizenry view the military as some kind of representative extension of themselves…hence all of the “we” rhetoric. “We have to take the fight to ISIS!” “We have to take back Iraq!” This drives me absolutely insane. Taking their idiocy seriously would be like me trying to explain to a mother of six what childbirth is like, and the best ways to have/raise children, and expecting people to listen to what I have to say.

This is something that’s been very apparent to me for the last decade, with Iraq in 2003 and other wars since. Watching politicians engage in gung-ho rhetoric while you know they won’t be the ones doing the fighting? It doesn’t feel right, but then, the UK doesn’t have a good track record of treating its soldiers right either, until it’s forced to. That said though, can people be blamed for being pro-war when they get fed a deceptive representation that influences their opinion?

Some might say SW promotes warfare but I’d see that as akin to the accusation that shows like CSI and NCIS glamourize crime investigations – anyone who has watched those shows knows it is not so. Autopsy, rubbish bin searching, grim crime scenes, long hours, huge pressure – where’s the glam factor in all this? But in SW you get to blow up the Death Star! Yeah and get a 90% casualty rate no matter what. Hoth? That was an utter rout and Endor? Well, you can invoke Power of the Plot on that one, the Empire should have been able to hand the Rebels their arse Death Star or no Death Star. Not to mention no one bats an eyelid at the briefing, where they’re told the mission is to fly into a battle station, blow it up AND out-run the explosion that results.

One thing that crops up from time to time is that WWII soldiers didn’t talk much of their experiences, certainly my Granddad didn’t. Yet, when you look at what went on, an obvious counter arises: How could they? That’s likely true for my correspondent here, he may not wish to talk of it, but if he did, what would he say? How could he make me see and feel what he did?

There’s a great exchange in the Fargo TV series:

“We could do it that way. You ask me for my papers… I tell you “it’s not my car, that I borrowed it”… see where things go from there. We could do that. Or you could go get in your car and drive away..”

“Cause some roads you shouldn’t go down. Because maps used to say, ‘There be dragons here.’ Now they don’t. But that don’t mean the dragons aren’t there.”

Do we have accurate maps and do we really know what we want from our entertainment? Or are we all just walking blindly towards a waiting dragon?