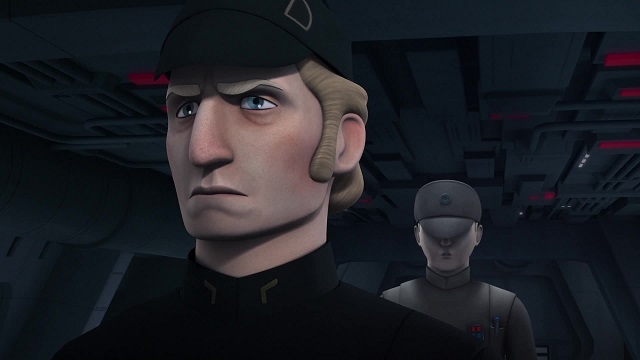 The Empire has always had a very tenuous position from a narrative standpoint. They’re supposed to be the overwhelmingly powerful overlords, the ones who hold the galaxy in an iron grip and force any rebellion to fight on the run. On the other hand, they are also the antagonists, the bad guys, and their narrative role is to lose so that the heroic underdog can be victorious, and to be evil so the rebels can be the unabashed good guys.

There’s always a balance to be struck with these sorts of roles. Go too far to one side and they are boring, invincible foes any rebellion has no hope of beating; too far to the other side, and they are incompetent bumblers who should not be in charge of anything larger than a model ship.

Rebels has danced back and forth over this line throughout its run thus far. In the show’s beginning Grint and Aresko were rather cartoonish sorts, rather over-the-top in their antagonistic ways and never quite managing to catch or trap those pesky rebels. Agent Kallus has been on both sides of the line, being a more serious foe than the Commandant and his henchman, but often coming up just short through his own arrogance or his soldiers incompetence.

It wasn’t until the end of the first season with Grand Moff Tarkin, and the beginning of the second with Darth Vader, when entirely competent (and terrifyingly so) Imperials came onto the scene. Of course, these were only guest villains, of sorts, present long enough to reinforce just how dangerous the Empire can be. That isn’t a formula that can be relied on, since it telegraphs whenever the Ghost crew will lose a battle. The Empire within the scope of the show’s regular cast has to be able to carry out the villainous role on its own.

“Stealth Strike” gives us one way that the Empire can be made into a greater threat: showing the technological advantage they have over the rebellion. Bringing in the Interdictor cruiser, a new technology that will prove a terrible danger to rebel forces in the time to come, along with the competent but arrogant Admiral Titus, is exactly what the Empire needed. Hera and the other Ghost crew members are mystified by the technology they are up against, and it’s only Titus’s underestimation of Ezra’s skill combined with Kanan and Rex’s unlikely teamwork that wins the day for the rebels.

We already saw a bit of the technological advancement brought on by the rebellion when Hera took the prototype B-wing on a test flight. But the Rebellion doesn’t have the resources to develop and deploy more advanced ships; the Empire does. And giving the Empire new, awesome ships and other toys to chase the rebels around with is a great way to increase the threat they present, as is deploying them with confident, effective officers in command of them. The Empire should be characterized by efficiency and loyalty to its cause, qualities that Titus has in abundance, rather than cartoonish evil.

We can progress from having one prototype Interdictor to them being more prolific across the Outer Rim patrols that catch rebel fleets off guard. We can also bring out other models of TIE fighters, like TIE bombers and TIE interceptors, ships that the Ghost hasn’t faced before and may not be able to counter quite as easily. We can toss in a couple of references to other material by bringing in Missile Boats or other heavily armed small craft that can go toe-to-toe with the A- and B-wings. We can even go as far as introducing the Super Star Destroyer if we want a true demonstration of the Empire’s strength. That’s the thing about the Empire: they get a lot of really great technology in terms of pure demonstrable military strength. The possibilities are endless.

Of course, all of the technology in the galaxy won’t be enough if there aren’t competent officers and pilots crewing them. Which is why more recurring Imperial characters are just as essential as showing off fancy new tech. Admiral Titus did a great job of being fallible and yet still intelligent, not making stupid mistakes beyond those brought on by hubris (a common Imperial failing). Like with Kallus before him, however, if he returns to the show, we can be sure that he’ll not underestimate the Ghost crew again. 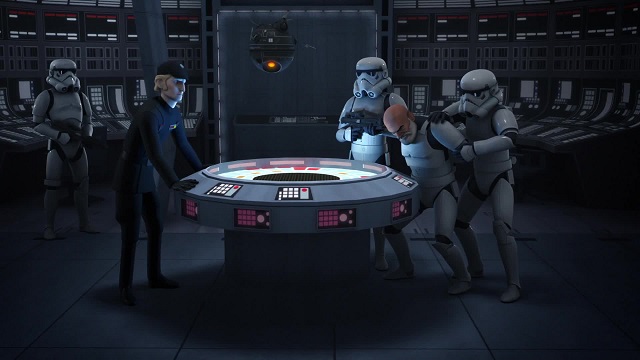 Jay: I have two pet peeves when it comes to the Empire: incompetent clownish-ness and cartoonish evil. When deployed effectively, those two things work well and sometimes they make sense (Grint and Aresko, small-time officers on a small-time world come to mind). But otherwise, it smacks of laziness and I don’t abide it.

Actually, I’ve a third pet peeve. The so-called “good Imperial.” Now, hear me out: I’m all for moral complexity and nuance when it comes to portrayals of the Empire. But I dislike Imperials being portrayed as simple good guys, especially while their fascism and the like is whitewashed or excused. Pellaeon from the late Legends EU comes to mind as the key example of this problem — he was a former slaver and a human supremacist portrayed as an enlightened despot. Some Imperials are genuinely good people, surely, but they’re good people in service to an evil system and that ought to always be kept in mind. I suppose the example of Pellaeon always grated because he was in charge of the Imperial Remnant and had no such excuses, unlike an Admiral Rogriss or the new canon’s Admiral Sloane, who are good people (but still ruthless authoritarians) who serve a bad system.

Rebels hit exactly the right chords for me with the character of Admiral Titus. He’s a duty-bound officer, whose speech to Rex reveals his devotion to Imperial service and his commitment to the idea of order as a positive good for the galaxy. In that, he reminds me of the EU’s “Generationals” — officers from families with a proud tradition of Naval service, who serve the Empire to create order out of chaos rather than any moustache-twirling evil — and his resemblance to A New Hope‘s Commander Praji, a Generational in the EU, bears that in mind. But Titus is still ruthless, willing to dismiss a sapient human being as “equipment” and willing to summarily execute a child. Consequently, he’s an effective Imperial and a duty-bound Imperial — a good Imperial in that sense — but he’s not a morally good Imperial. He’s still a villain through and through. He thinks that order is such a positive good that he’s willing to justify all sorts of means to get to that end.

Let’s see more of Admiral Titus and more Imperials like him please. Well, by “like him” I mean personality-wise. It’s about time that we finally got some female Imperial officers on this show, or even women of color at that. Just sayin’.

P.S. I’d be remiss if I didn’t add a giant <3 for that Interdictor. Interdictors are perhaps my favorite capital ship in Star Wars, and it was beyond delightful to see one on screen. I really dig the new design, and am intrigued by the notion that it’s Star Destroyer-scale at that.