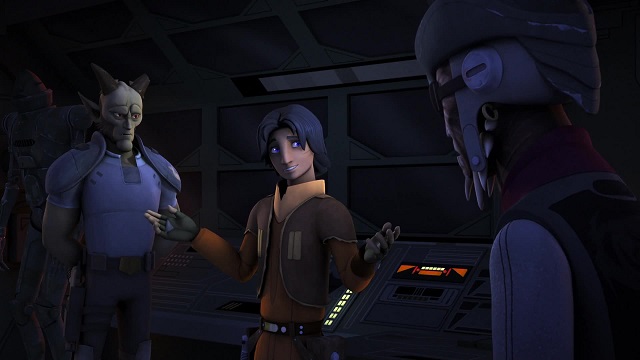 The underworld of Star Wars is a lively place, full of colorful characters and the sort of imaginative creatures that fully exemplify what a galaxy far far away might look like. From the moment we step into the cantina in Mos Eisley and see creatures talking, laughing, drinking and playing music, it’s been a part of the franchise’s DNA. What sort of characters exist beyond the edge of the galactic spotlight, where the shadows are thickest and the promise of adventure, debauchery and profit are strongest?

In Rebels, the underworld has hitherto been represented by Vizago and Azmorigan, two crime lords with differing methods but similar goals. Vizago is subtle, willing to play any and every side in order to gain himself the largest profits. Azmorigan is more bombastic and demanding, but no less unscrupulous, demanding what he sees as his and willing to kill to get it (and to avoid having to pay for it). Of course, we could bring up Lando, but he is more of a business person who happens to deal with unsavory sorts.

Added to the list this season is Hondo Ohnaka. Enthusiastic about everything and frightened of nothing, Hondo fit right into the underworld of the Clone Wars era he was introduced in, taunting Sith Lords and making “friends” with Jedi Masters. Hondo is a sort of idealized underworlder, not truly amoral, just selfish and out for profits. He has a sense of honor and a healthy respect for the Jedi, and his antics are far more fun and entertaining than menacing or sleazy. For all of the hard times that Hondo has fallen on without a ship or crew of his own, he still represents an interesting counterpoint to Vizago and Azmorigan, and delivers an intriguing offer to Ezra.

It’s not the lure of profits that tempts Ezra to join Hondo when they meet, it’s the lure of adventure, of a life without expectations or responsibility. Hondo promises Ezra the freedom to be whatever he wants, a pirate, a Jedi, or a Pirate Jedi. And the lure of the underworld, of returning to the life that he once knew, does tempt him. After all, how far and high would he rise as a swashbuckling captain of his own vessel, swinging his lightsaber as they loot from Imperial shipments? Would the Inquisitors really be looking for a Jedi among the pirates? 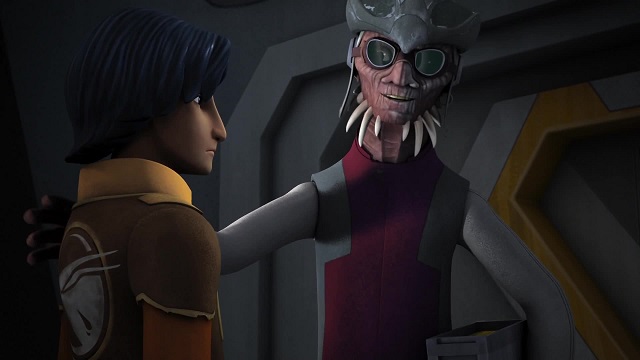 Now, of course, Ezra has had his own dealings in the past with both Vizago and Azmorigan, to varying degrees of cordiality. Once, he was on a path to join them, stealing and selling items on the black market. He knows what the underworld is like in some respects, and at one point in his life would not have hesitated to join up with Hondo and go gallivanting off across the Outer Rim. But by the time we see him in “Brothers of the Broken Horn”, he’s changed. He’s grown, become wiser and developed a conscience, as well as starting to plan and think ahead instead of just living out each day.

Ezra hasn’t just found a crew since he joined the Ghost, he’s found a family. Leaving that family would be all but inconceivable for him. But more than that, his priorities have changed. He’s not looking out for himself only, or seeking his own needs above anyone else’s. His first thought is to help people, whether that means going back for the old clone soldiers, putting himself in harm’s way in Sabine’s stead, or trying to negotiate for the power generators in lieu of any sort of payment. Hondo recognizes this trait in him, more than the skill with a lightsaber, and readily identifies Ezra as a Jedi in the spirit of those who came before.

The underworld of Star Wars is one of the most seductive aspects of the universe in general, and the promise of an adventurous life out of the way of the Empire or any other galactic government is one of those stories that has littered the universe for years. But it’s not one that Ezra is being drawn back to. Like his master before him, Ezra recognizes that he has a higher calling beyond himself. He might still whine a bit about his responsibilities and the way he’s being tugged this way and that by those around him, but he isn’t going to run away from them. He’s not that person anymore.