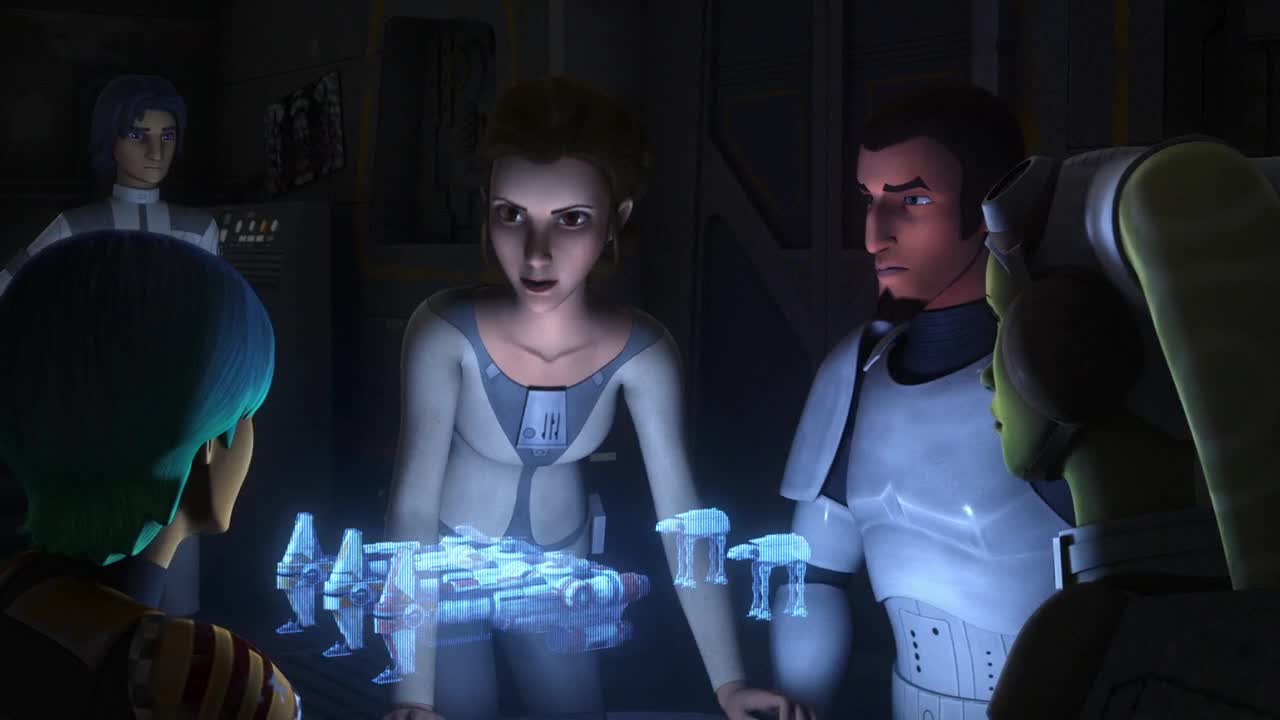 Jay: This week’s Rebels episode featured an interesting twist on the now-familiar Star Wars Rebels cameo. Instead of appearing to interact with the Ghost crew and develop their arcs in certain ways, Princess Leia basically carried the episode herself. This was an interesting approach to take, and while I’m strongly disappointed that Leia and Hera never had the chance to have a conversation about politics and rebellion (I’ve long considered Hera the Leia of the Ghost crew, the true idealist and believer in the cause) I found myself very interested in how they developed Leia’s character in a general sense. In the past, I’ve been pretty opposed to small universe syndrome unless a character cameo benefits the larger Rebels story. Here, I made an exception because I am horribly biased in favor of all Leia appearances in all media but it occurs to me that they did something different and rather interesting with Leia. Rather than using Leia to tease out character growth in the main show characters, they used Leia to tease out more information about Leia and the larger galactic state of rebellion. Without ever lifting the camera from Lothal, we got a look at what things are like elsewhere in the galaxy and that’s a pretty cool thing.

See, we’re usually limited to the perspective of the Ghost crew, which is just one rebel cell among many. A lot of folks in the audience — myself included — got rather antsy over staying on Lothal too long, and while the crew is moving about they’re still just a tiny, tiny piece in a large galaxy. They’ve only attracted Lord Vader’s attention because of Ahsoka’s presence and the whole Jedi thing, but they’re not really that important on the overall stage (yet?) despite running around with Sato and Fulcrum/Ahsoka. But running into Leia allows the small Phoenix operation to intersect, however briefly, with the grand galactic state of play.

Think about it: Princess Leia hails from the Core World of Alderaan, and is a senatorial emissary who can command the respect of the Imperial authorities on Lothal. More than that, the “meddling” of Alderaanians is so well-known as to frustrate a minor supply official on this backwater world of Lothal. We get a real sense that the Alderaanians are a thorn in the Empire’s side, but they have social status and the law behind them and the Empire dares not intervene. We know how the Empire deals with rebels who blow things up and cause a mess — we’ve seen plenty of that. But this time, we see the Empire utterly ineffectual against another form of rebellion: rebellion within the system. To be sure, Leia is secretly working with the Ghost crew and all that: but Leia’s royal sass is a part of Alderaan’s fight against the Empire too. It’s a significant part, because it’s the one part of the rebellion that can operate with impunity and truly frustrate the Empire. (It’s also simply delightful to see a teenage Leia scare the crap out of an Imperial authority figure — I can imagine Imperial officers terrified that Leia will show up on a ship and “meddle”).

We also get some insights into A New Hope, speaking of Imperial frustrations and the larger Rebellion. More than just explaining Vader’s line about mercy missions, we really understand the extent to which the Imperial Senate has very real power and clout such that its disbandment would not only be an Imperial goal, but one that initially worries General Tagge with its unprecedented nature. We also get some insights into why Tarkin destroyed Alderaan — whether or not he suspected Alderaan of treason, he was aware of the role Alderaan played in using its legitimacy and status to frustrate Imperial goals. Tarkin wasn’t merely spreading fear when he destroyed Alderaan, he was very deliberate in squashing Leia’s shield (echoing a threat Vader made in the old radio drama). I also suspect Tarkin — the Rimward provincial that he is — was jealous of the Core Worlds and sought to destroy the most beautiful among them as revenge for the way they looked down on him in the Tarkin novel, but that’s neither here nor there…

Star Wars Rebels is a show about a specific band of rebels, but for an episode we got to see the larger galactic stakes of the Rebellion just as we briefly caught glimpses of Bail Organa in the first season. I hope that someday we’ll get to see the proper foundation of the Rebellion with Organa, Mon Mothma, and (I hope!) Garm Bel Iblis but for now this is a good start. And even though I’m leery of cameos, I truly hope to see Leia again because as cameos go, her role was basically perfect for the themes and subject matter of this show and I think she adds a lot of value to it. I hope to see her again, perhaps in more roles involving the foundation of the Rebellion — or an arc on Alderaan — or just providing more mentoring for the Ghost crew, perhaps actually talking to Hera or Sabine!

Or just sassing Imperials some more. For like a whole episode. I’d totally be down for that. 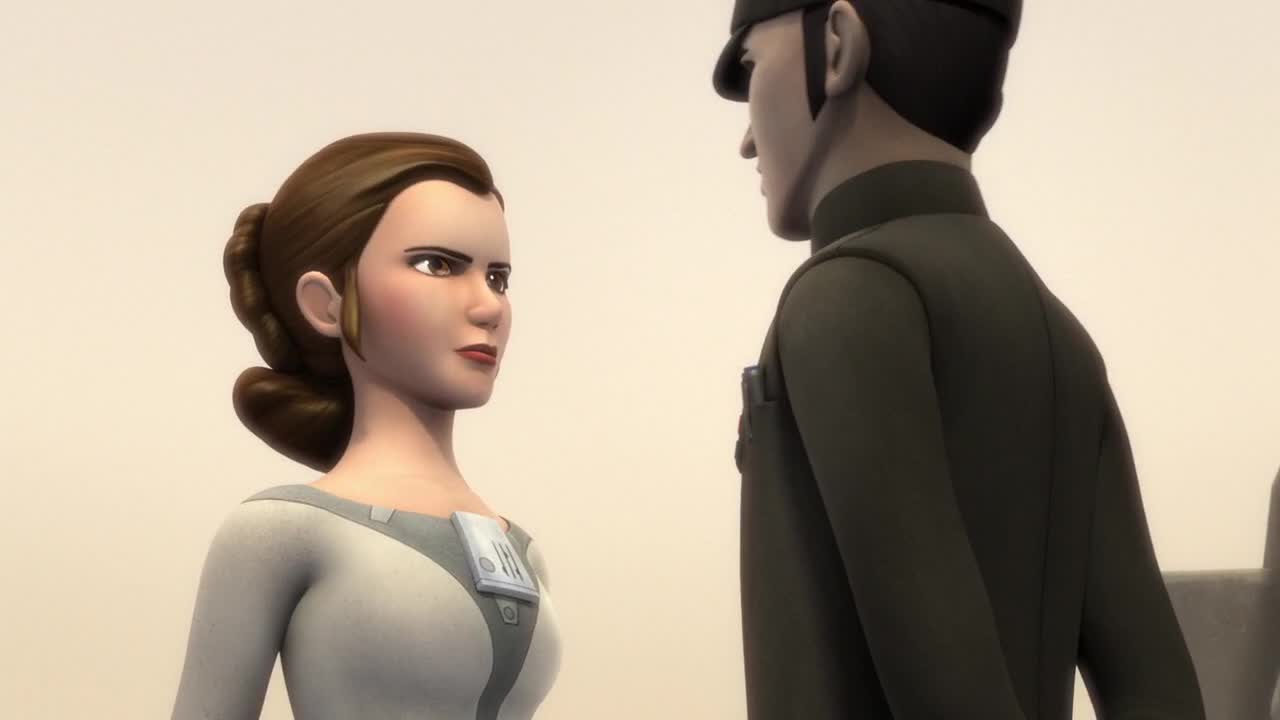 Ben: Something I’d like to chime in with is how well Leia is written as a leader, both in terms of her being able to motivate and with her compassion. She inspires the Ghost crew to action and helps them find a plan that will get them the ships they need, even though she’s only just met them. Idealistic talk about causes aside, she’s clearly heard about them from her father, and knows that they’re capable of much greater feats than merely stealing three outdated starships from under the Empire’s nose. All she really has to do is remind them of who they are and give them the swift kick to the rear that they all need to get out of their funk and start making a plan. Even Ryder Azadi, someone who was determined to abandon the cause and flee as far from the Empire as possible, gets wrapped up in it and becomes a key player in their plan.

But more than that, and something that struck me right away on my viewing of this episode, is the strength of Leia’s compassion. She notices that something is bothering Ezra, even though she’s never met him and barely knows him, and rather than simply taking Kanan’s word that he just needs time to deal with things, she seeks him out and gives him a talk that isn’t trite, fluffy or falsely enthusiastic. She’s honest and forthright, and helps remind Ezra that his words haven’t been in vain. She tells him why she fights the Empire, despite all of the comforts and privilege she enjoys; despite her having basically everything that Ezra lacks at that point, she still connects with him in an immediate and effective way. She brings him back to the fight.

Rebels builds a brilliant contrast with the more worn, weary Leia we saw in The Force Awakens; Leia is more active and excitable here, of course (including outright killing two stormtroopers with a stolen blaster), but she’s still just as driven and passionate for justice as she ever was. This episode, as Jay said, isn’t just a good episode of Rebels, it’s a great character piece of a young princess who will grow into a character we already know and love. She displays the same qualities in this episode that she does throughout the original trilogy, and even into the distant timeframe around The Force Awakens. It’s no wonder that she’s a leader pretty much through her whole life, she has all of the best qualities of one from a very young age.

One thought to “Rebels Revisited: Not Just a Mercy Mission – the Greater Stakes of Rebellion”