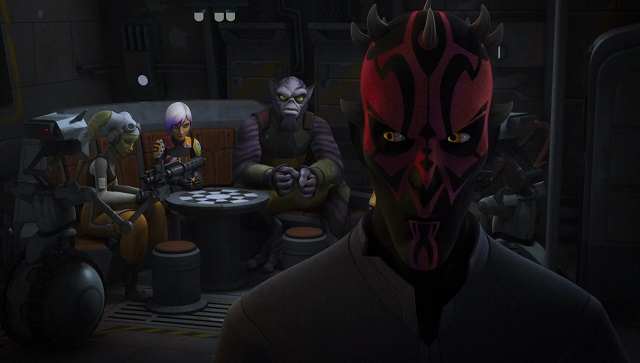 Bringing Darth Maul back to life was one of the biggest, and most controversial, changes brought to the Star Wars canon by The Clone Wars. At George Lucas’s behest, the Sith apprentice was brought back from the fate he met in The Phantom Menace, found half-crazed and ranting on a junkyard planet, only his rage and the power of the dark side keeping him alive. As TCW went on, Maul became one of the show’s strongest recurring antagonists, laying out insidious plots to try and regain his own power and to ensnare the ultimate object of his hate: Obi-Wan Kenobi.

When TCW ended its broadcast run after its fifth season, Maul’s ultimate fate was one of the plot lines that was left open-ended, after “The Lawless” brought his shared organization of criminals and Mandalorians down around him and Palpatine himself did something to his wayward apprentice, but explicitly left him alive. Following up on that, the comic series Son of Dathomir also avoided concluding his story, leaving him on the loose in a galaxy that was about to change from Republic to Empire.

Maul came back once again in the season two finale of Rebels, older but just as devious, and he once again escaped a definitive fate by fleeing his ersatz prison on Malachor. Maul’s appearance was the capstone to a season largely defined by the conflict between Ezra and Kanan and their opposite numbers on the Imperial side, where he introduced Ezra to the powers and dangers of the dark side. What stories took place in the time between then and the end of TCW are left (for the moment) to the imagination and vague hints about the “Siege of Mandalore”.

And now Maul is back again for season three. “The Holocrons of Fate” makes it clear that Maul is back for the long haul, his antagonistic relationship with his “apprentice” Ezra promising plenty of conflict in the future. The fact that he blinded Kanan also helps on that count. But the major question, and the crux of the meta-narrative conflict, is whether Maul should be a part of Rebels this season at all.

The first episode, “Steps into Shadow”, introduced us to Thrawn, and opened the door for a more militaristic and grounded conflict to come. The threat of a Grand Admiral stalking and hunting the Rebel fleet stood large over the premiere. The premiere also seeded more Force conflict to come, bringing in Bendu and showing that Maul’s advice to Ezra had sunk in deeper than even Ezra seemed to recognize—but none of that hinges on Maul being alive, or even present. 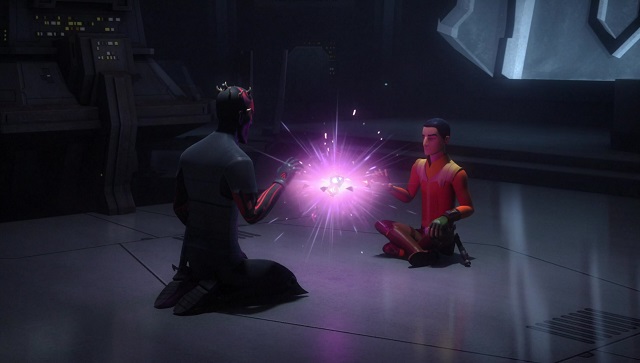 How well does Maul fit into Rebels as an antagonist? He will be filling more or less the same role that he did back in TCW, as a third party outside of the two main sides of the overall galactic conflict who harries both sides and pursues his own agenda. While his motivation and endgame are more obscured now than they were before, his role in the show’s hierarchy of villains is more or less the same aside from one factor: his tempting Ezra toward the dark side, either by his machinations or the anger he drives the young apprentice to by his mere presence.

But the question remains, even with that, whether Maul needs to be in Rebels. His presence at the end of season two served its own purpose in a bottle, without a need for him to come back; he was in “Twilight of the Apprentice” to formally introduce Ezra to the dark side and begin him traveling down the dark path, and for his knowledge of Sith lore and the temple itself. While his escaping Malachor is natural with how hard he has proven to kill, did he need to return to Rebels itself instead of going off into the galaxy for other stories elsewhere?

With Kanan being blinded and Ahsoka MIA, Ezra needs guidance. In his anger and frustration over his own failings, and blaming himself for what happened, he turns to the Sith holocron. He does not need Maul to reappear and tempt him further; self-discovery of the dark side is a path we have seen others walk in the past. For Kanan, blind as he is and as much as he might have reason to hate Maul, much of his character development in the two episodes that we’ve already seen is him learning to become even more Jedi-like and move past his disability. Bringing Maul back does not have any power over him.

So what does Maul have to do aside from throwing another red blade into the ring? Exactly what he did in “The Holocrons of Fate”: give Ezra and Kanan a new quest. The shared visions of planets and people were defined just enough to be intriguing to both the characters and the audience, and they give the Jedi characters something to be concerned about and to do apart from just hanging around the Ghost. They also give us another dark side enemy who isn’t the indomitable Darth Vader or yet another Inquisitor, someone who has undeniable skill but is even more dangerous because of his cleverness.

Maul is there to distract and separate our heroes into defined factions. We saw in this episode that aside from Kanan and Ezra, no one in the Ghost crew stands a chance against Maul one on one, or even in a group. It will be up to the two Jedi to try and handle him whenever he shows up, and to possibly chase him as they both go after what they saw in the vision (and possibly wind up in the same rather sandy place). Will this split the team up entirely, or just delegate out the different conflicts on an episode-by-episode basis? That remains to be seen. But Maul is most certainly a distraction, as much to the heroes of the story as to the audience.