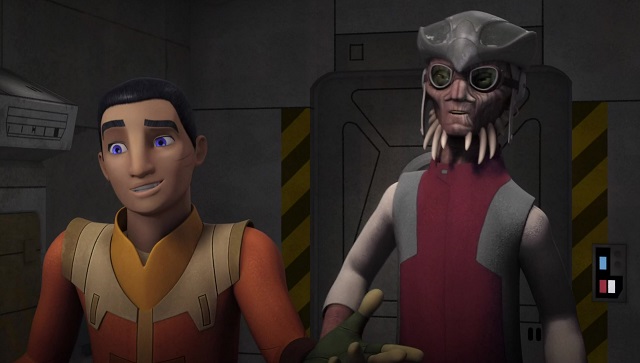 Mike: While it was as entertaining as Hondo episodes always are, the thing I found sort of perplexing about this week’s installment of Star Wars Rebels was that I’m not certain what they want us to think of Hondo at this point. He stands firmly apart from the assortment of quasi-recruits we discussed last week in that he has no direct interest in the Rebel cause and only works with them when he can get something out of it, but it seemed like the larger point of this episode was to suggest to viewers that Ezra is fundamentally mistaken in trusting him, and continuing their chaotic friendship is going to lead our heroes to a bad place.

But would that amount to sowing doubt for its own sake, or are Hondo and Ezra headed for a real split soon? It’s more likely, I think, that they’d want us to think they are in advance of a genuine hero moment for Hondo. For all the noise the characters make about him only being out for himself, the creators have always had so much obvious affection for the character (going back to his adventures with Obi-Wan and Anakin in The Clone Wars) that I have a hard time seeing him ever truly betray Ezra and the gang in a serious way—as Ezra notes, he may be sketchy but teaming up with him has always worked out in the end. Are they really signaling a change in that dynamic? According to Taylor Gray in Rebels Recon, Ezra feels genuine affection for Hondo because he reminds him of the carefree scoundrel he was as a child–so what did he take away from this week’s events that he didn’t know already?

Ben: Well, right now it seems to be a question of driving a wedge between him and Hera. Hera’s buckled down on the shenanigans as things have gotten more intense and serious, especially with Kanan being blinded and taking a backseat, and having Hondo (and Azmorigan) around is putting an agent of chaos into the mixture. I feel there was a bit of meta-commentary when Ezra mentioned that every time they team up with Hondo, things seem to work themselves out in the end. Even in this episode, they rescued the Ugnaught and got away with a hold full of proton bombs. Yes, it does work out, we know from a narrative standpoint that it will because Hondo is who he is from an out-of-universe perspective. But Hera doesn’t have our perspective, and neither does Zeb. 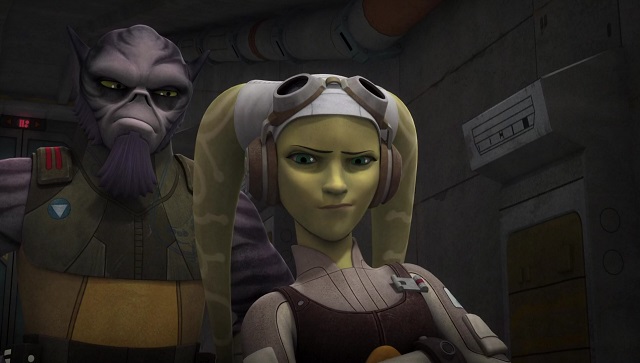 Jay: We’ve already seen Hondo as Ezra’s path not taken. They’ve continued to show that Ezra has sympathy for him. The crew — which almost didn’t accept Ezra — doesn’t accept Hondo. I think this is a little too interesting a dynamic to waste on a dramatic change in character, especially given how long the crew has known Hondo. Hondo only cares about money, or himself. He has affection for others, but no more than that. A sudden heroic moment would not only feel out of character, but a waste.

Hondo’s useful for telling stories about the main characters. More than that, he’s useful for demonstrating that not everyone responds to galactic events by becoming heroes or villains. He’s thoroughly in the middle, and the heroes have to navigate that — Ezra’s learned he can only rely on Hondo to a point.

I don’t know if that answers the question of why the writers keep using him, aside from obviously liking the character. I can’t say I share the affection for him — I’d just space him. I think that’s a sentiment that the Empire and the Ghost crew have in common. But maybe the writers and Ezra are on to something.

David: How can you say that about Hondo! He was my favorite The Clone Wars character and the version we have in Rebels, the old pirate down on his luck and barely getting by, is even better.

The relationship between Ezra and Hondo is one of my favorite parts of the series. It’s obvious that the pirate is Ezra’s weak spot, and I can’t say I don’t understand him: Hondo is nothing but trouble but man, is it fun trouble. As Jay said, it’s a dynamic too interesting -and fun- to throw away for the sake of a one-episode moral. I like the idea of Hondo being that one problematic friend that many of us have, the guy or girl you know is completely unreliable but that you can’t help but love, both because they have undeniable personal charisma and because of the weight of your shared experiences.

On the more technical side, this episode was a complete triumph. Everything, from the storyboarding to the animation to the editing, was top notch, probably the best Rebels has ever been. I really hope this is not an exception but a small taste of how things are going to be from now on, because I could get used to this…

2 thoughts to “Rebels Revisited: “When Have I Asked You to Trust Me and it Hasn’t Worked Out?””