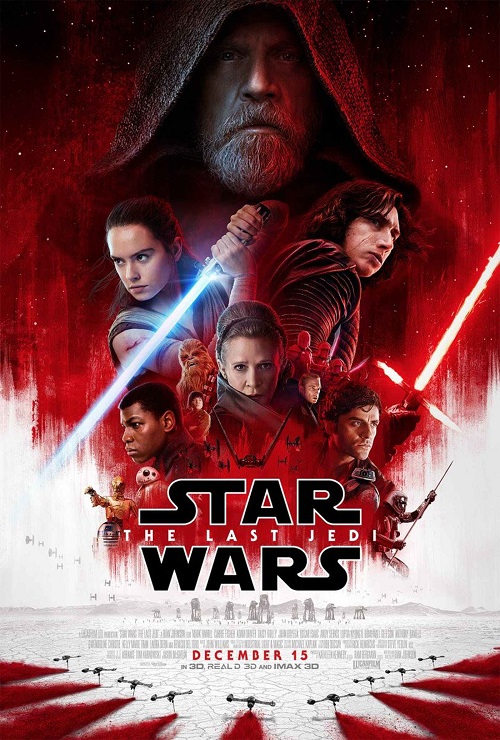 When Rian Johnson was announced as the director for Episode VIII, I recall one of my first thoughts being “oh shit, the ‘Ozymandias’ guy”. While I had seen Looper and liked it well enough, Johnson’s work on Breaking Bad was the most interesting to me in light of this job—what would a TV director do with Star Wars?

So it’s fitting that one of the easiest comparisons people are making to The Last Jedi is ’33’, an early episode of the rebooted Battlestar Galactica that sees the heroes’ fleet hounded indefinitely by the Cylons with no escape in sight. We knew the Resistance’s escape from D’Qar would be an early set piece in the film, but never in a million years would I have expected that escape to be the entire film. Though maybe that’s on me—The Empire Strikes Back is mostly about the heroes running away as well.

Nevertheless, it felt like a bold decision in a film full of bold decisions. Both supporters and detractors can generally agree that The Force Awakens was the safe version of a new Star Wars movie—it needed to be loved by as many people as possible or the whole operation would have been limping right out of the gate. But The Last Jedi expands the cinematic (and tonal) language of Star Wars enough for both of them. Actual, non-Force-based flashbacks, time lapse shots, X-Men-style telepathic conversations, and that crazy lightspeed ramming sequence are just some of the new ideas Johnson injects into the saga here, and while one or two of them may not be well-regarded in the final analysis, you have to give the guy credit for daring to try.

In fact, I can see why Johnson made so positive an impression on Lucasfilm that they gave him a whole new trilogy to develop—for both better and (occasionally, mildly) worse, he’s apparently kind of a nutty dude who made kind of a nutty movie, one that isn’t particularly concerned with how many people love it. It feels like, well, a very George Lucas way to operate, while the film itself feels distinctly Johnson’s—experimental and idiosyncratic and goofy and melodramatic all at once.

For all the risks Johnson takes stylistically, though, I do wish he’d been a little more daring with the lore. When all is said and done, Luke really did just plain give up—no terrible original sin for the Jedi Order, no shocking history with Snoke (that we know of yet), no real history of any kind. He’s just a sensitive guy who went through a terrible ordeal with the dark side as a young man and would sacrifice anything, even the Jedi’s future, not to repeat it. I can buy it, but I was hoping for more. I was hoping to be not just saddened but stunned.

With that being the case, though, neither Luke nor Snoke making it out of the film alive is really the best possible scenario going forward—as is Rey’s family having no great significance. Kylo was right to an extent, it really is past time to wipe the slate clean and build something new from this galaxy. Luke was right to an extent, too—he couldn’t have taught Rey himself, there was too much baggage there. But as we learned from the Expanded Universe, Rey could never fully become who she needed to be with Luke still around to solve her problems; for the film to be thematically sound, he had to go.

As did Snoke, and man, did I giggle like a lunatic when that happened. My biggest question going forward—and you could call this a failure of the sequel trilogy so far if you were so inclined—is, did Snoke even matter? While I’m positively over the moon as far as what this will mean for Kylo’s future development, will the films just move on without Snoke now and let the novels tell his backstory or is there something there that remains important? My Rey Snoke theory (RIP) was partly borne of the fact that we knew so little about him and what he actually wanted that it was possible finding Luke Skywalker was just a means to some other end for him—but nope, apparently he just wanted to kill Jedi and run shit and Rey was irrelevant beyond that.

Is that really all there was to him, and to the First Order’s larger goals? I still hope not, just like I still hope Rey will find something in those books she swiped that turns her into a Jedi as distinct from Luke as The Last Jedi is from The Force Awakens. But for all we don’t yet understand, I really respect the ballsiness of lurching this trilogy so conclusively past the old generation, on both sides of the fence. At the end of the day the saga lives or dies by our investment in the new characters, and every second away from the old farts makes Rey and Kylo and Finn and Rose and Poe another second stronger, gives them more time for their own decisions and fears and losses and loves. Bring them home in one piece, JJ.

20 thoughts to “Let the Past Die: The Last Jedi Flings the Torch”