“They were filthy junk traders. Sold you off for drinking money. They’re dead in a pauper’s grave in the Jakku desert. You come from nothing. You’re nothing. But not to me.”

When many heard these words in The Last Jedi, they saw a turning point in the Star Wars saga. No longer was it a tale of legacy, of “mighty Skywalker blood”, but instead a story of how the Force could be found to belong to all, and even a “nothing” like Rey could be attuned powerfully to the Force. It was a sentiment that stirred many people jaded with Star Wars.

It was a sentiment that has been present in many parts of Star Wars, both canon and Legends, both recent and old. Today I come to praise two oft-derided things, the Jedi Academy trilogy and The Phantom Menace. Rey, though a great example of a Jedi and a great counterpoint to Kylo Ren, was far from the first Jedi whom Ben Solo might have called “nothing”.

In the Jedi Academy trilogy, when Luke Skywalker seeks out those Force-sensitive people who have not been purged by the Empire, he goes to faraway and obscure places to find them. Although Luke does initially frame this as looking for Jedi descendants, he also states that he seeks those known as miracle workers, or the incredibly lucky. He later explains:

“Everyone can use the Force to some extent, but a few have a stronger innate talent.”

“Reach out and feel your mind, feel your body, feel the universe surrounding you. The Force stretches around and through everything. Everything is a part of everything else.”

Perhaps because the Empire held sway in the economically and geographically central places, he reaches out to loners, to the unusual and to the undiscovered. Streen, a person whose experience resembles mental health difficulties, in an abandoned city with only birds for company. Tionne, a refugee who survived as a traveling musician. Kyp Durron, a teenager imprisoned as a child for the political views of his parents and now a slave miner. Gantoris, one of the surviving descendants of a failed mining colony on a turbulent volcanic world. Mara Jade, taken from her reluctant parents and shaped into the Emperor’s Hand from early childhood. Kam Solusar, the son of a murdered Jedi, a victim of torture and robbed of his memories. Dorsk 81, who saw himself as a failure of replication, and yet that difference gave him a connection with the Force. 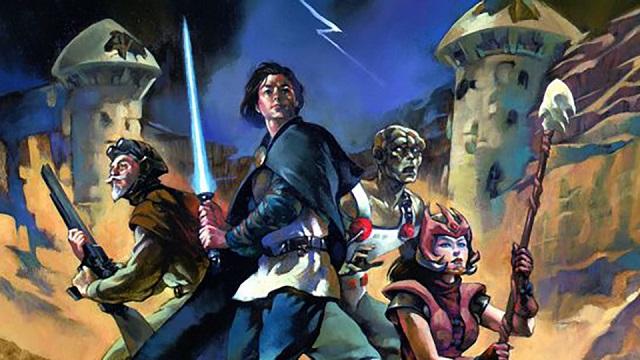 While we might note that all of their portrayals are as white, these stories translated into our world would be far more diverse in terms of ethnicity. Their diversity in class and gender, however, gives us some sense of how the Force is for all. This diversity was less apparent in Anderson’s later work, Young Jedi Knights, but we still saw orphan street-child Zekk become an important part of the Order, even as Jacen, Jaina, Lowie, Tenel Ka and Raynar came from far more privileged backgrounds. And the original class of the Jedi Academy were not just from various “nowheres” and “nothings” but also became eponymous Champions of the Force, defeating Exar Kun whilst Luke was trapped in a coma.

In the rest of the Expanded Universe, many members of the old Jedi Order, for example the members of the Jedi Council, also had backgrounds which were not of galactic significance. Depa Billaba was orphaned by pirates, Mace Windu another orphan from a perpetual war, Ki-Adi-Mundi was the child of isolated farmers, Coleman Trebor came from a species not considered civilized, Even Piell from an impoverished family on a war-torn world.

Similarly, it is not simply that Jedi training is the one route to knowing the Force. We found Force users more instinctual and practiced, of different religious beliefs arising from the Force and ways of connecting to it, and even those who seemed disconnected from it, like the Yuuzhan Vong, were included in its spectrum beyond the narrower vision of the Jedi.

Furthermore, it was not just in the Legends of the new Jedi Order that we found the Force moving in many who were not from “special” backgrounds or notable family lines. The Star Wars films themselves show us Anakin Skywalker, born into slavery, who was the Chosen One. His mother, Shmi, was taken into slavery as a child (in both her Legends and canon background), in one version separated from her family on a voyage to the Outer Rim. One might suppose – Skywalker being a conventionally Tatooinian name – that it was not her family name, but one given to her as a slave. So the idea of the Skywalker “blood” is one based on only three generations, not the long legacy of wealth and privilege that might be associated with bloodlines in our earthly context.

Contrast this, for example, with other fictional ideas around the power of “blood”, which have an invariable association with racism and eugenics. In Harry Potter, the main text addresses antagonism towards Muggleborns, who may be considered equivalent to a person who is Force-sensitive without any member of their family being so. However, in the background, JK Rowling stated that “Muggleborns will have a witch or wizard somewhere on their family tree, in some cases many, many generations back. The gene re-surfaces in some unexpected places.” Magical ability in many stories is connected with bloodline, while superheroic status is often connected to technology, academic prowess and wealth – see that other Disney-owned behemoth, the Marvel Cinematic Universe.

In our world where discourses about IQ and wealth still are used to put forward racist and other exclusionary ideologies, a world like Star Wars is important. From the examples in this article through to the far more explicit dismissal made by The Last Jedi, Star Wars rejects the idea that whatever the essence of greatness might be, it is held in bloodlines, in selective breeding, or even in elite training. The Force can be found in all things that have life, as Luke shows Rey on Ahch-To. Rey could contend with Kylo Ren without Jedi training. Tionne found different ways to connect with the Force than those we associate with Knights, and yet was a teacher of many Jedi. Gantoris had raw overwhelming power, and had used it to lead his people despite the fear that grasped him. We celebrate Star Wars because it reminds us that we can each connect with the spirit of life and feel the light, without “great” parents, or money, or extensive learning. All we need to do is reach out.

“[The] Force does not belong to the Jedi. To say that if the Jedi die, the light dies, is vanity.”

Or, as Champions of the Force notes:

“The way to extinguish a shadow…is to increase the light.”

4 thoughts to “Nobodies: How the Jedi Have Always Come From Nothing”