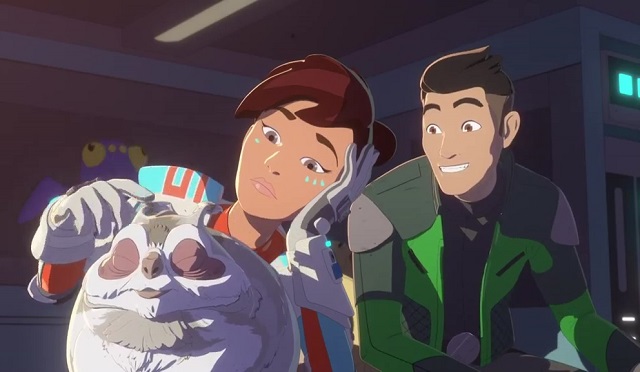 Resistance’s first season has been much slower in terms of plot developments or big events than the shows that have come before. The emphasis has been much more on seeing the lives and daily happenings around Kaz, Tam, Neeku and the others on the Colossus. We’ve gotten to know them and see what their status quo is, what their thoughts and feelings are on the state of the galaxy. But the focus has been very local, specific to the characters and their specific foibles and struggles. Kaz’s effort to get to know the other pilots. Yeager and his reluctance to open up to others. Tam’s frustrations with being shut out. Synara’s doubts about her place and her path. These arcs have not been high stakes, and only occasionally has anyone’s life even been at risk.

Now, that sounds fine on paper. But let’s put that back into perspective again. This is Star Wars we’re talking about. Since when has Star Wars ever been involved with or focused on the daily lives of its characters for any of the visual mediums? The movies are most often dashing from climax to climax, major plot points and character beats dropped in with the force of a sledgehammer. The shows have been more spread out, but they do take advantage of the long form structure to show more progressive growth than just dropping us in in media res. Resistance hasn’t done that.

Until now, that is. Ever since the show returned from its holiday break, the larger “plot” of the show has received a renewed emphasis. For some people, that just means the show is finally becoming interesting because Star Wars is all about the drama and the plot and the action. But it goes to illustrate, once again, how different the emphasis in Resistance has been from everything else that’s come before it. It’s not been about that, it’s been about the slapstick, the comedy, the fun of living in the Star Wars universe and interacting with the sorts of beings that one might come across. By focusing on the small stuff up to this point, on the smaller stakes and the smaller characters and moments, the escalation of the end of the season will be that much more potent.

The problem is that focus has put some people off of the show as a whole. Without a focus on the big events, there is not as much of a flashy or dramatic draw to the show as there was to Rebels or The Clone Wars. There is not as much to pull the audience in each week to see what will happen if that’s the sort of thing that you’re after as a viewer. It has opened up a lot more room for younger viewers or viewers interested more in a slice of life in the Galaxy Far, Far Away to see a show that is entertaining from moment to moment, but has not placed as much emphasis on the overarching story. Now, with the change of focus to a more major plot, those viewers who had been turned off are being called back with that midseason trailer and its glimpses of events to come.

We’ve seen Kaz’s thoughts about the First Order, trying to convince everyone about the danger they presented to ears that were varying degrees of deaf. Their occupation of the platform has turned a few closer to his side, but coming soon will be the ultimate demonstration of their intentions. With Tam already being sympathetic toward them, exactly where she will fall when the news about Starkiller Base breaks is going to be a status quo shakeup of the highest order. Right alongside that will be the destruction of Hosnian Prime, Kaz’s homeworld, and the possible death of his father, along with a full takeover of the Colossus that would likely put Yeager, Neeku and the pilots of Ace Squadron out of their homes and possibly in greater danger.

Resistance has had a steady status quo up to this point, and part of any show’s ability to go on beyond an initial concept is to iterate, to expand and explore beyond what the original premise was. Now that we’ve had the status quo for a while, it’s time for things to start to shake up. Admittedly, that means putting some pleasant and friendly characters we’ve come to love through terrible things. But it wouldn’t be the first time, and it’s sure not to be the last. Here’s hoping the show that continues on the other side of those events keeps the cheer at the heart of Resistance intact.

One thought to “Re: Resistance – How Slow is Too Slow?”