Part of the appeal of the Star Wars narrative is the fact that it tells a story too grand in scale to be limited to a single medium. While books, comics, video games, and even virtual reality experiences have already added to the vast and varied narrative tapestry that is the Star Wars franchise, Galaxy’s Edge represents a foray into uncharted narrative regions.

In most instances where a property has been adapted into a theme park attraction, it’s removed from the property’s narrative chronology. One example is Star Tours: The Adventures Continue, the previous Star Wars-themed attraction at Disneyland and Walt Disney World.

Each journey on Star Tours is unique, because the adventure is comprised of multiple randomized scenes that may take place in any corner – or at any period of history – in the Star Wars galaxy. Passengers on the Starspeeder 1000 might encounter characters and locations from any of the Star Wars eras, and they may be out of order: the first scene might take place with Finn and the Millennium Falcon on Jakku, while the next scene might occur during the events of The Phantom Menace on Tatooine. As a result, it is obvious that Star Tours is not “canon”, since characters and events separated by decades appear side-by-side or non-chronologically.

By contrast, Galaxy’s Edge fits into a precise place in the Star Wars chronology: the period of time between The Last Jedi and The Rise of Skywalker. This explains why certain ships and characters can be found on Batuu, including the full-sized Millennium Falcon, the very sight of which is reportedly capable of bringing travelers to their knees.

Unlike Star Tours, where any ship or character might appear at any time, the presence of the Falcon on Batuu places it on a fixed timeline: we’re seeing the ship after it left Crait, but before it heads into whatever adventures are in store in The Rise of Skywalker.

Batuu or Bust: The Expanded Universe

When the new canon was launched in advance of The Force Awakens, it became clear that non-film material was meant to play a more significant role in the rebirth of the Star Wars galaxy.

The original Expanded Universe flowed almost exclusively in one direction: the movies were the ultimate canon, and the works that expanded the narrative of the movies were permitted to be creative, but only within the confines of the story already laid out by the movies. In instances where a movie later contradicted something that had entered the Expanded Universe through a book or comic, the movie “overrode” the previously existing canon. With the advent of the new canon, however, Lucasfilm incorporated lessons learned from the original Expanded Universe, and as a result, books, comics, and other non-screen narrative avenues were brought into the ongoing canon in a more integral manner. 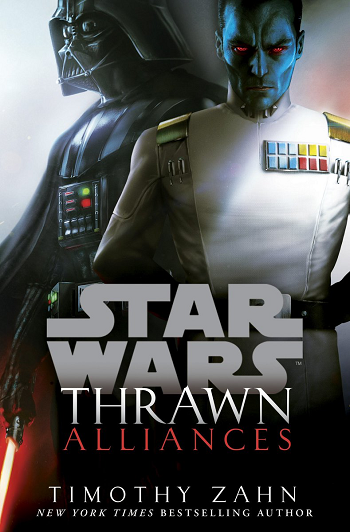 In a similar vein, the new Expanded Universe has laid the groundwork for Galaxy’s Edge well in advance of its opening. Several different comics and books have already given readers a glimpse of Black Spire Outpost, setting up the adventure at Galaxy’s Edge. In Thrawn: Alliances by Timothy Zahn, a subplot set during the Clone Wars sees Anakin Skywalker teaming up with Mitth’raw’nuruodo and investigating the disappearance of Padmé after she visited Batuu.

While Thrawn: Alliances offers some indirect exploration of the setting for Galaxy’s Edge, the middle-grade book Pirate’s Price by Lou Anders and Annie Wu provides direct backstory for Smuggler’s Run, explaining how the “Flight of the Falcon” concluded with the legendary pirate Hondo Ohnaka obtaining the Millennium Falcon on Batuu. And the subsequent printed tie-in material promises to offer a glimpse into further secrets of Black Spire Outpost: details learned in the Galaxy’s Edge comic can help provide visitors with access to adventures that might otherwise pass unnoticed.

Disneyland attractions have always had an emphasis on narrative, even beyond the stories told in the rides themselves. An example can be found in the queue for Guardians of the Galaxy: Mission Breakout at California Adventure Park. As guests wend their way through the Collector’s gardens, they can spot a grate on the side of the building that has been blown open, and a trail of red footprints leading out of it. At a later point in the ride’s queue, just before sitting down in the Gantry Lift, the previous beat in this narrative is revealed: an open can of paint that Rocket Raccoon walked through during his escape from captivity.

This attention to comprehensive narrative is part of what makes Star Wars uniquely suited for adaption into a theme park. In Star Wars, every weapon, ship, and character comes with a narrative; pairing that narrative with Disneyland, where even the hot dog stands come with a story, opens the opportunity to experience Star Wars stories in an unprecedented and uniquely personal manner.

One key avenue to personalizing the adventure at Galaxy’s Edge comes through the Play Disney Parks app. The app, which was recently updated to include the Star Wars: Datapad feature, allows guests to interact with a plethora of elements in the new land. Using Bluetooth connections, users of the app can activate interactive elements – such as reactions out of droids – and access additional information, such as the audio clips that play from satellite dishes located throughout Black Spire Outpost. 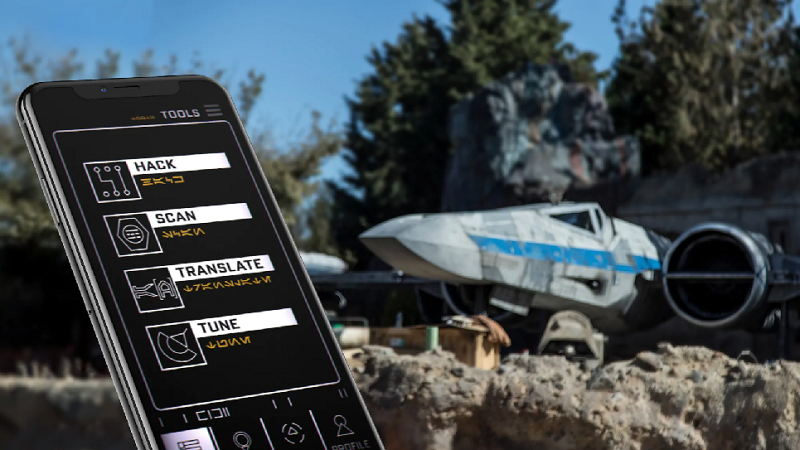 But it isn’t just the ability to further examine the details present in the land that makes use of the app worthwhile. The “Jobs” function allows guests to take part in the action in a way that dramatically increases the level of interactivity. A mission for the Resistance might involve traveling from one corner of Black Spire Outpost in order to use the app’s scan function on a First Order transport ship docked on the opposite corner.

Successful completion of missions will be recorded in the app (as well as rewarded with virtual credits), but the missions you choose to complete will affect your profile accordingly. While everyone begins as a “Free Agent”, completing missions for one of the three factions on Batuu will eventually see the profile reclassified as part of the Resistance, the First Order, or simply as a Scoundrel. If a First Order stormtrooper demands to see identification and sees that you’re a member of the Resistance, you may find yourself facing some awkward questions – you may want to brush up on your Jedi mind tricks before visiting.

Choose Your Own Adventure

While devotees have dreamed of visiting the Star Wars galaxy since it first appeared on the big screen in 1977, Galaxy’s Edge represents one of the first opportunities to believably experience that journey. With the integration of interactive technology, guests are invited to take part in the narrative of Star Wars in a more material and consequential manner than ever before.