I can remember when I first read from Shatterpoint. It was a preview, in the back of Force Heretic: Refugee, for the first-ever Clone Wars book. At the time, my enthusiasm for Star Wars was at a low ebb; I’m not sure it was for any particular reason, but I had been sustaining an all-consuming fandom for six years, and The New Jedi Order had been dominating the Expanded Universe for years and changing the universe in ways I wasn’t sure I was ready for and was mired in the particularly dull Force Heretic Trilogy. I was just starting to get a little burnt out and needed a breath of fresh air. That Shatterpoint preview was it.

Immediately, the prose was punchy, atmospheric — it radiated attitude. As I read, Mace Windu — a guy we had seen in the movies but didn’t know that much about — landed on his homeworld, a new planet that leapt from the page with unique character, a jungle world so rancid its cities must live under sterilization fields. Then the action hit. Windu, naked after going through the probiotic showers required after arrival, finds a couple thugs harassing the other naked travelers in the locker room, stealing their valuables. Coldly, indifferent to the vulnerability of his nudity, Windu tough-talks the thugs, a supremely confident badass warning off weaklings he doesn’t want to bother with — but kind of does. When they go for him, he knocks them senseless in a vivid, expert action scene. It turns out they’re the local cops; that’s the kind of world this is. Windu goes on to meet his Republic contact; on the street, they’re caught up in some sort of riot, a fast-expanding street battle, and she’s hit with a blaster bolt. As Windu kneels over her, trying to help her, the local militia come up.

The militia behind him clattered to a stop. “You! Korno! Stand away from that woman!”

He glanced back. Six of them. Firing stance. The lightpole at their backs haloed black shadow across their faces. Plasma-charred muzzles stared at him. “This woman is wounded. Badly. Without medical attention, she will die.”

END_OF_DOCUMENT_TOKEN_TO_BE_REPLACED 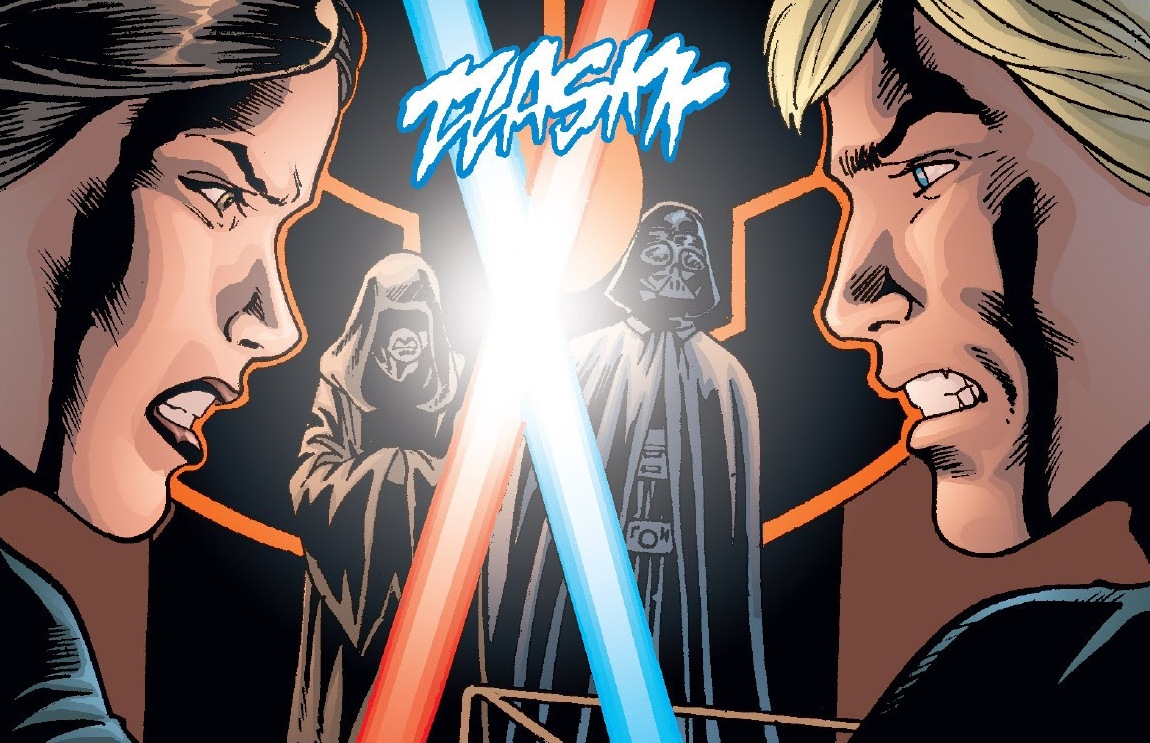 The Infinities series of comics, recently highlighted here by Alexander Gaultier, was basically Star Wars’ version of Marvel’s infamous series What If? Each of the miniseries started with one of the Original Trilogy films, then changed one key moment to see what would happen. The end results were…varied, in this writer’s opinion, but the mere concept of deliberately altering movie continuity was unheard of before then, and it’s a premise that still holds, as Alexander said, unlimited possibilities.

Unfortunately, a few months back, writer Peter David revealed what I’d long suspected—that the series weren’t really as “unlimited” as it seemed. David was originally approached to write Infinities: A New Hope, but his idea was rejected for being “too dark” The story, according to Lucasfilm, still had to end with the good guys winning.

This makes a tiny bit of sense when viewed through Star Wars’ mythological lens; it was foretold that the Force would return to balance somehow, so to go against that would contradict somewhat the very premise of the overall film saga. Nevertheless, why bother with Infinities at all if you’re not willing to screw with things? On its face, the original trilogy is a nonstop razor’s edge, where the slightest tweak at almost any time could have brought ruin to the main characters and the galaxy at large. Giving too many alternate paths to ultimate victory, I believe, does a disservice to Luke, Han and Leia’s struggles—and even the role of the Force itself in the proceedings unfolding as they did. END_OF_DOCUMENT_TOKEN_TO_BE_REPLACED

With Captain America: The Winter Soldier coming out tomorrow (in America, the nation that is in the name of the damn movie yet somehow getting it last), it’s timely to address Star Wars’ relationship with the superhero genre. Thanks to the Jedi’s powers and its expansive continuity, it has more than a little in common with superhero universes, but less has been done with those similarities than you might think.

The superhero genre, long restricted primarily to primacy in comics but now becoming the dominant form of movie blockbuster as well, is best understood as stories about outstanding heroes endowed with superhuman or unrealistically optimal abilities who make careers of fighting evil under a distinct identity. The tropes of the genre — secret identities, costumes, supervillain rogue’s galleries, superhero teams, origin stories, interlocking shared universes, fuzzy continuity, sliding timelines, temporary deaths — should be familiar to most of the general public, let alone the geek community.

Star Wars lacks a lot of those tropes. Its heroes operate in the open, not hidden behind masks and nicknames. They tend to face villains sequentially and beat them, rather than constantly matching wits against the same pool of bad guys. Star Wars’ continuity is, in principle and usually in practice, sharp and its timeline immobile, its deaths mostly permanent. But there are similarities worth noting.

END_OF_DOCUMENT_TOKEN_TO_BE_REPLACED

The current state of the Expanded Universe is unsettled, at best. A cursory look at the upcoming publishing schedules for just about any type of media reveals little on the horizon, as the franchise seems to hold its breath for the sequel trilogy’s arrival. It’s not clear that the Expanded Universe we have come to know will survive. The recent revelation that the films will be set about thirty years after the original trilogy suggest that at least some of the post-Return of the Jedi EU will be lost.

It’s general consensus that the material set before Return of the Jedi is likeliest to survive, because there’s less probability of the sequels contradicting it. Perhaps the least likely sources to be contradicted are those set well before any of the films and essentially unconnected to them. This suggests that the Expanded Universe should be concentrating its efforts there if it doesn’t want them wasted.

Currently, The Old Republic, EA’s massively multiplayer online roleplaying game, is set in the Republic’s distant past, thousands of years before the films. It looks likely to continue on as an important segment of the franchise for the next several years, and it likely can get by due to its setting.

The obvious tack for this article, then, would be to suggest concentrating EU resources on the era of The Old Republic. But that argument pretty much writes itself without my spending any further time on it, and I’d rather make a little bolder suggestion: revive the era of Knights of the Old Republic.

END_OF_DOCUMENT_TOKEN_TO_BE_REPLACED 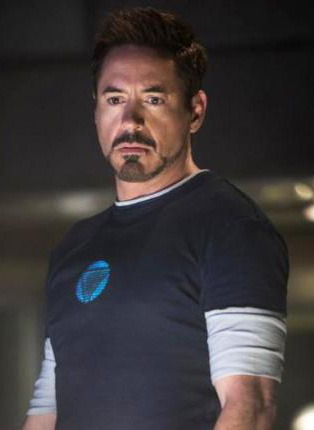 Heath Ledger as the Joker.

Marrying a beloved character with a living, breathing actor is always going to be a controversial process—especially if you’re trying to reinvent them to a degree. Your movie won’t be out for a year or more, and now irate fans have all the time in the world to mock even the idea that this person could become their favorite character. This guy, as the Joker?? Are you serious??

Part of the problem is that characters in print media, especially comics, can look vastly different depending on who’s illustrating them—my ideal Tony Stark may be nothing like your ideal Tony Stark, and we could both have valid points because all there really is to go on is “white, black hair, goatee”. That’s why taking a slightly askew angle with your casting can be such a powerful move—in Downey’s case, launching an entire filmic universe on the back on one man’s likeability—because it imbues a distinct human element to what is often, honestly, a very bland sketch of a person. People freaked out about Jesse Eisenberg being cast as Lex Luthor in the Batman/Superman movie, and hey, that movie may yet be a train wreck, but Eisenberg screams “rich asshole” to the moviegoing public already (much like Downey screamed “hard living”), and that’s far more important to producing a resonant Lex Luthor on the big screen than whether he’s old and/or bald enough. Admittedly, it’s hard for me to say what Christopher Nolan saw in Heath Ledger that screamed “Joker”, but hell if he wasn’t proven right.
END_OF_DOCUMENT_TOKEN_TO_BE_REPLACED