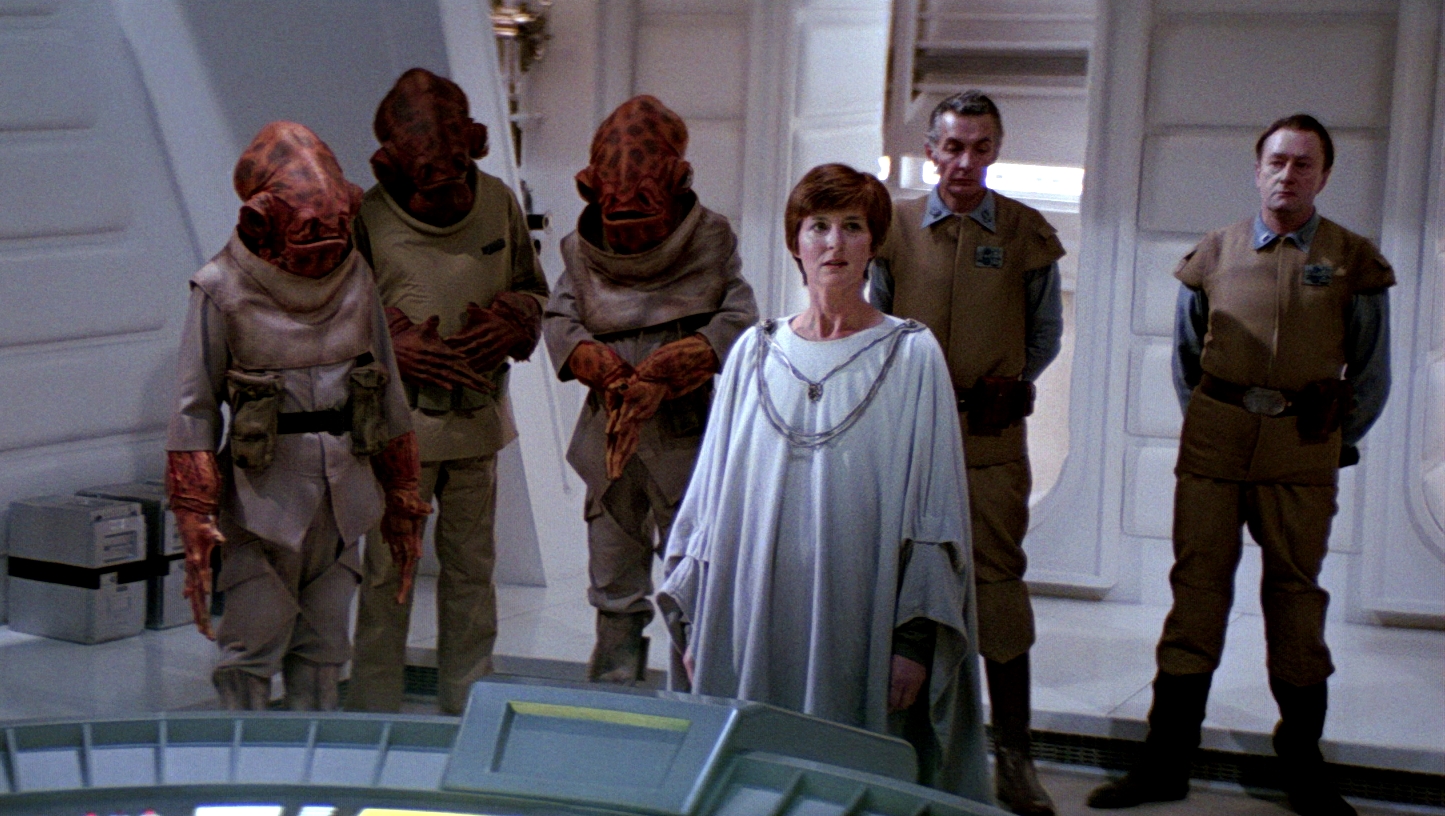 To say overthrowing an entity the size of the Galactic Empire is a difficult task would be a significant understatement, but the process of building a new state remains a far greater challenge. Stories such as the X-wing series, the Thrawn Trilogy, and The Courtship of Princess Leia have told tales of the fledgling government’s conflicts against Imperial holdouts such as Ysanne Isard, Grand Admiral Thrawn, and the warlord Zsinj, but these are primarily military conflicts against external forces – a simple continuation of the Galactic Civil War with foes other than Palpatine and Vader.

Certainly, some might see the non-military aspects of the New Republic’s early years as mere political rubberstamping – less interesting than the Senate procedures of The Phantom Menace. I would disagree. The only reason we perceive them in such a way is because so few authors take the time to seriously consider the logical consequences of our heroes’ actions, or the untapped potential in stories dealing with these elements of the universe. Despite the importance such an event would undeniably hold for the future of the galaxy, the only significant mention of a constitutional convention was made by West End Games’ Dark Force Rising sourcebook, which explained that the debates went on for so long that a provisional council had to be established to keep the government running in the interim.

The delegates to the convention of our own world’s United States devised several potential systems of government for their newly-independent nation – imagine just how varied the proposals might be in a galaxy where the representatives come not from different states, but entirely different planets and species. The rebels were an incredibly diverse group drawn from a thousand worlds scattered across the galaxy. A thousand different ideologies, a thousand different histories, and a thousand different cultures, all united by a common enemy. In the absence of that overriding threat, how might their opinions of what form the post-Imperial galaxy should take differ?

Take, for example, Chandrila and Corellia, the homeworlds of prominent rebel leaders Mon Mothma and Garm Bel Iblis. Despite their shared status as Core Worlds, the Expanded Universe tells us that they could barely be more different culturally and politically. The former embraced democracy with a fervor that would impress even the ancient Athenians, while the latter has experimented with periods of monarchy, democracy, and what essentially amounted to corporate dictatorship. Both might have agreed that the Empire must go, but still differ wildly in their opinions of what they should do after it does.

Some might wish to restore the Old Republic exactly as it was, while others, mindful of the lessons of Palpatine’s rise to power, may seek to dramatically alter its structure so as to prevent the rise of another demagogue. As one might expect of a galaxy-spanning insurgency, the rebellion was run by Mon Mothma as an elected dictator with virtually unlimited powers, and it seems inevitable that some might wish to retain elements of that strong central authority in order to more efficiently combat the challenges and threats the New Republic will face in the process of establishing its place in the galaxy.

And, of course, no new state would be complete without taking special interests into account. The Expanded Universe has primarily explored this concept through the Bothan species, which managed to parlay its part in obtaining the plans for the second Death Star into political success, eventually resulting in the election of Borsk Fey’lya as Chief of State. Surely, however, the Bothans are not alone in their desire to be rewarded for their contributions to the cause.

The Mon Calamari, the Wookiees, and the Sullustans all provided significant assistance to rebel forces, to say nothing of the losses suffered by the Alderaanians. Many worlds will require economic aid to recover from the damages caused by their resistance to and liberation from Imperial rule, and aliens will desire representation in the new government as confirmation that the New Republic does not share the Empire’s humanocentric perspective.

An even more pressing concern is that it is hardly unusual for a population recently freed from tyranny to desire the blood of its former oppressors as retribution. If the New Republic is to have any hope at maintaining the support of the worlds that suffered most under Imperial control, then it will have to make examples of any ranking Imperial officers or administrators that fall into its hands. There will be war crimes tribunals and executions, the proscription of Imperial symbols and organizations, and former servants of the Empire forever barred from participating in the new government.

But do not let my interest in the realities of a post-revolutionary state leave you thinking that all the New Republic era has left to offer are debates and trials and other mundanities. These elements are all important and should not go ignored, but there still exist countless opportunities to tell the franchise’s traditional stories of heroism and adventure, only this time we also have an entirely new context in which to explore them. The original trilogy is primarily the story of our small band of unlikely heroes, told against the backdrop of a vast galaxy-spanning conflict. The foundation of the New Republic is an opportunity for our heroes to finally graduate and move on to new chapters in their life stories.

With victory comes great responsibility. Our heroes spent the majority of the original trilogy as destructive figures, their role being to fight and kill their enemies, to bring about the Empire’s downfall through force. The rebellion’s ultimate triumph was defined by the deaths of Palpatine and Vader and the destruction of the second Death Star. Now is the time for us to see them transformed into constructive figures, who are just as able to devote themselves to creating something positive, and can rise to the challenge of building a new state that will adhere to the principles that they fought for.

It is here that the greatest potential of the New Republic lies. It gives us an invaluable chance to move beyond what we’ve become familiar with and demonstrate that our heroes need not forever remain locked in their original roles to be interesting. Students become teachers, soldiers become generals, and insurgent leaders become statesmen. Some may find themselves moved into entirely different and unexpected fields due to the new government’s critical lack of manpower; a team of commandos might find itself repurposed to combat organized crime on Coruscant, just as starfighter pilots may find themselves assigned to hunt down pirates and smugglers instead of fighting on the front lines against the Imperial Remnant.

The needs and responsibilities of a government are infinitely greater and more varied than those of a resistance movement, after all. In toppling the Byzantine bureaucracy that was the Galactic Empire, the New Republic has created for itself a great many pairs of empty shoes to fill, and likely ones ill-fitted to rebel feet at that. Our heroes will find themselves rising to heights they never dreamed of achieving, charged with protecting and rebuilding entire worlds, and responsible for training the next generation of leaders to ensure that the restored republic continues along the right path when they are gone.

The foundation of the New Republic should not be treated merely as a platform upon which to continue the adventures of the victors of the Galactic Civil War. The end of the Old Republic and its transformation into the Galactic Empire is a pivotal part of the saga, and so too should be the birth of a new state from the Empire’s ashes. Our own history provides us with numerous examples of governments being overthrown by popular uprisings and the struggles faced by their successors, and the creation of the New Republic offers us an unparalleled opportunity to examine their circumstances through the lens of a galaxy far, far away.

The Expanded Universe has already seen enough civil wars and infighting to last several lifetimes, and so the announcement of the sequel trilogy marks the perfect moment to strike out in a new direction. Rather than endlessly racing from one crisis to the next, we can take the time to thoroughly explore just what it means to live in the universe of Star Wars. Now we can see exactly what the rebellion has been fighting for all this time, and to give them the chance to make good on their claim that it is they who should truly hold the galaxy’s reins in their hands.

5 thoughts to “A Case for Starting Over, Part II: A New Republic”