As the evidence starts accumulating that Star Wars is in for, if not a total reboot, at least a big, clean break from the past, it can be easy to lose track of how many existing stories in the Expanded Universe never quite wrapped up. It’s a tough bar to set, of course—every time I see someone ask “what loose end do you want resolved?” one person inevitably confuses “loose end” with “lack of information” and says something like “what happens to the Big Three after Crucible?”

So when I started formulating this article in my mind, I knew I had to focus on some of the best (read: most egregious) cliffhangers the EU had to offer; stories that really did leave characters in life-or-death situations with no easy resolution, only to meet untimely ends as the franchise moved on without them.

And then, as I started making a list, something even more interesting occurred to me—this isn’t really an EU problem as much as a video game problem. Sure, there have been some comparable situations in the larger body of material, but the only item I considered that came from the “modern” era of the last decade or so that wasn’t from a video game was the Galfridian family of the comic series Invasion, which was put on indefinite hiatus after its third story arc—a hiatus which, between the comics license leaving Dark Horse and writer Tom Taylor becoming something of a powerhouse over at DC Comics with Earth 2 and Injustice, I think it’s safe to say is now officially infinite.

But as much as I’d have liked to see more of the Galfridians, their last appearance offered far more resolution than some of LucasArts’ finest could claim. So I figured, if a theme emerges, might as well embrace it. Let’s talk about the three great dangling threads of the late, great-ish LucasArts era of Star Wars video games. 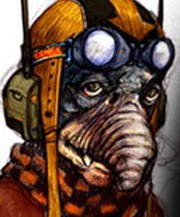 One of the later Phantom Menace tie-in releases, Star Wars: Starfighter came out in 2001 and told the story of the Lok Revenants, a band of scoundrels led by Davy Jones lookalike Nym. The Revenants get mixed up in the invasion of Naboo, as these things tend to go, but as the plot of Episode I doesn’t exactly offer up a wealth of starfighter missions, the plot of the game is as much about their own piratey dealings as anything to do with Naboo. Filling the role of chatterbox comic relief in Nym’s entourage is Toydarian mechanic Reti. Reti is quick to brag, yet skittish in the face of danger, and that’s really all that needs to be said about him.

The game presumably did well, because when Attack of the Clones came along one year later, bringing with it that wealth of starfighter missions they were looking for, the Revenants returned in Jedi Starfighter—under the leadership (though don’t call it that in front of them) of Jedi Master Adi Gallia.

In the intervening time period, Reti had run afoul of Sabaoth Squadron, the game’s non-movie-related bad-guy mercenaries (not to be confused with the good-guy mercenaries), retaining his freedom only thanks to Nym’s intervention. Reti lends his usual boisterous assistance during the first two-thirds or so of the game’s story, which deals with a Separatist bioweapon (which, funny story, may have ultimately been the cause of the devastation of Honoghr described in Heir to the Empire), until Jango Fett shows up in the middle of a battle to claim a bounty on Reti’s head. Reti flees into hyperspace to parts unknown, and that’s the last we see of him. At the end of the game, Vana Sage, another friend of the Revenants, heads off to track him down, but she and Reti’s ultimate fates have never been revealed.

Interestingly, though, Nym did play a role in the MMORPG Star Wars Galaxies, set two decades later. By this point he’s a pirate king pretty much running his own system, and occasionally lending assistance to the Rebellion, but if Reti or Sage are still floating around, he doesn’t say so. The only other clue to their fate, of course, is Jango Fett’s death in AotC, a short time after his appearance in Jedi Starfighter. That doesn’t prove anything either way, but it does suggest that if the resourceful Reti was able to hunker down somewhere for at least a little while, Fett would soon have much bigger things to worry about. 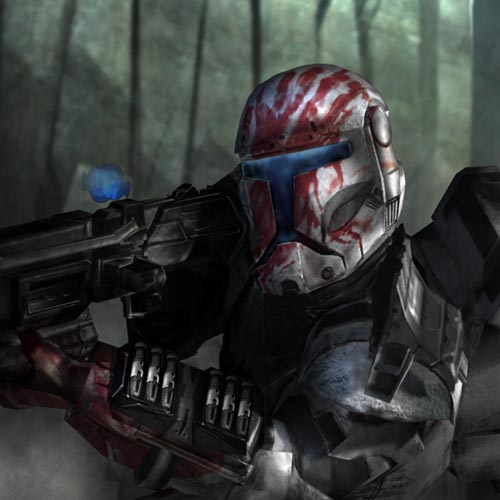 Now, if you think Reti got the short end of the stick, don’t forget that he at least got two video games—not so for our next subject, the gruff clone commando known as Sev.

The first real first-person shooter of the prequel era, Republic Commando was kind of a big deal when it came out in 2005. By inspiring Karen Traviss’ eponymous series of novels following a different group of commandos, it certainly shaped the EU in enormous ways that are still being felt today. At the start, though, it was a pretty straightforward FPS, innovative in its use of teammates, perhaps, but while the four commandos who made up Delta Squad (with the exception of their creatively-named leader Boss, the only clones not portrayed either by Temuera Morrison or a soundalike) were an interesting enough bunch, the story was a string of only loosely-connected missions stretching from the Battle of Geonosis almost all the way to Revenge of the Sith, and was more about cool set pieces than narrative arcs, in my opinion.

The final set piece took the Deltas to the early stages of the Battle of Kashyyyk ultimately seen in RotS, and featured one of the first appearances of General Grievous. After weeks of fighting, the story eventually catches up to the arrival of Yoda’s forces. They’re unable to land due to the presence of a Separatist destroyer, so Delta infiltrates a turbolaser platform and splits up—one commando to each battery. They successfully destroy the enemy ship, allowing Yoda to land, but during their exfiltration Sev meets heavy enemy resistance and loses contact with the others, who are ordered by Yoda himself, despite their protests, to leave Sev and GTFO.

Meanwhile, Traviss’ Commando books eventually caught up to the end of the war and she expressed a desire to resolve Sev’s fate in her post-RotS Imperial Commando: 501st. Wanting to keep their options open, LucasArts declined that opportunity, and sure enough, Sev’s fate was never revisited. What we do know, thanks to 501st, is that the rest of Delta survived the war and were folded into the new Imperial command structure, with a replacement for Sev that they hoped would be merely temporary—Traviss even went so far as to have Walon Vau, Delta’s training sergeant, go to Kashyyyk on his own to track Sev down, but he was unsuccessful. 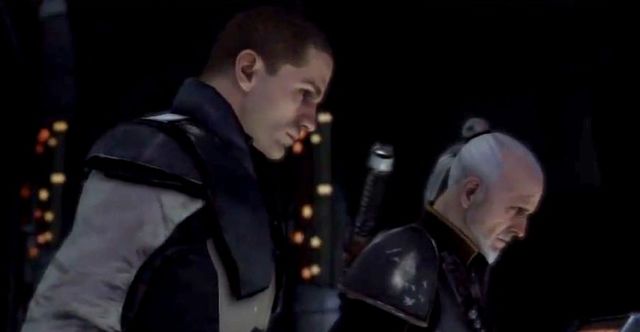 If one game since Republic Commando was an even bigger deal upon its release, it was The Force Unleashed. Billed as occupying a level of importance to the SW saga comparable to that of the films, the game used cutting-edge graphics and in-game physics technology to tell the story of Galen Marek, Darth Vader’s secret apprentice and ostensible replacement upon Vader’s ascension to Sith Master.

As part of a seemingly endless series of cat-and-mouse games between Vader and Sidious, who of course knows all about him, Marek ultimately falls in love with his Imperial liaison Juno Eclipse and sets in motion a chain of events that may or may not have birthed the entire Rebellion (don’t ask). Marek is seemingly killed in battle against the Emperor himself, only to be cloned (again, seemingly) and resuscitated six months later in TFU2. The clone escapes Vader’s facility on Kamino and wreaks yet more havoc for the Empire, eventually luring Vader back to Kamino for another man-on-man fight. Standard stuff so far, except that this time, not only does “Starkiller” defeat Vader, but he and the Rebels actually manage to capture the son of a bitch alive, and ship him off to their base on Dantooine (yes, that base on Dantooine).

The Force Unleashed franchise loves its table-turning, though, and if you ask me, it’s almost guaranteed that Vader let himself be captured in order to learn the location of the Rebel base. That’s where this one gets interesting—yes, Marek’s clone is still alive and well at the end of the game, despite being conspicuously absent from any story further along in the timeline, but the real cliffhanger is less what happens to him than what the hell happens with Vader—he has to escape, of course, but he doesn’t know anything about the base on Dantooine in A New Hope, so it doesn’t seem like they would’ve been able to drag his possum act out for very long.

Also left problematically alive is Rahm Kota, a Jedi Master serving in the Rebellion during those early days (about a year before ANH at this point). Kota’s an even tougher nut to crack, as he plays a role in the lead-up to the Battle of Yavin in the game Battlefront: Elite Squadron. That game seems to guarantee his survival at least for a little while, though it mercifully doesn’t do anything with him post-Yavin, leaving at least some room for him to be dead by the time Luke Skywalker shows up. If there’s one cardinal sin worse than not finishing your story, it’s leaving a Jedi Master alive in the Rebellion post-Yavin.

Whatever one wants to think about Lucasfilm’s new Story Group and the state of canon going forward, it’s easy to see how LucasArts, as a wholly-owned subsidiary, would’ve been able to enjoy preferential treatment over licensees where its characters and storylines were concerned. One hopes that having everything under the auspices of Disney (in the event that Del Rey ultimately loses its own license, that is) would at least put all SW media on even footing and make bottomless cliffs like these less likely in the future. The benefits of synergy are not to be underestimated.

Thanks to Mazzic for the awesome artwork at the top of this article.

3 thoughts to “Bottomless Cliffs: On LucasArts and Loose Ends”