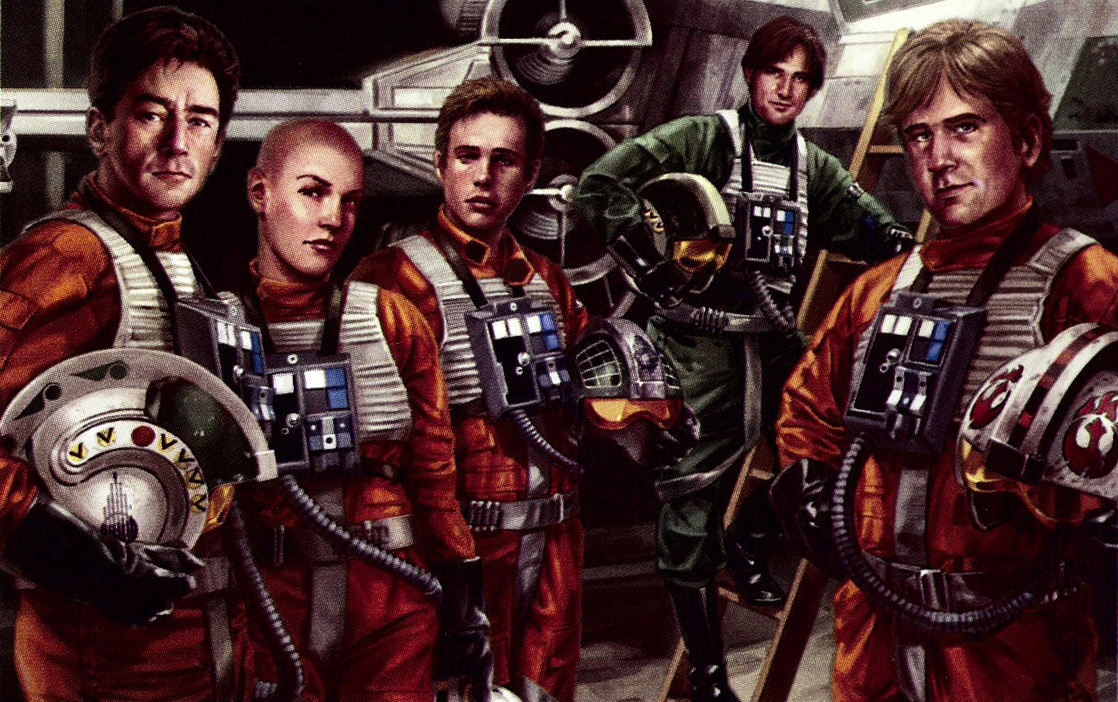 Once it found its footing, the Expanded Universe wisely wasted little time in taking advantage of the idea of a rebel starfighter ace unrelated to the Big Three. The X-wing series of novels by Michael A. Stackpole and Aaron Allston chronicled the struggles of Rogue Squadron (later joined by the motley Wraith Squadron), an elite unit of rebel pilots under Antilles’ command, against the remnants of the Empire in the years following the Battle of Endor.

The similarly-named X-wing: Rogue Squadron line of comics ran concurrently with the books, filling in the unit’s (and Antilles’) history between the end of Return of the Jedi and the first X-wing novel, Rogue Squadron. While he no longer enjoys the same level of importance he once did, having been promoted off the battlefield and raised to the rank of general before retiring into a state of relative (in truth, frequently interrupted) peace, Wedge Antilles remains a recurring character in the ongoing story and a figure of great significance in the history of the Galactic Civil War.

Unfortunately, recent years have seen the Expanded Universe stray from its experimental origins. Since the release of the Prequel Trilogy and the transfer of the novel license from Bantam to Del Rey, the Jedi have come to enjoy a central role in almost all events of galactic significance, most others having been shuffled off to the sidelines (or worse) to make room for them. The new films largely did away with the underworld characters epitomized by Han Solo and replaced the diversity of the rebel alliance with endless legions of (literal) Temuera Morrison clones, while the New Jedi Order series (in)famously closed its opening novel with the dramatic disposal of Chewbacca, the original hirsute sidekick, via falling moon.

Released in such close proximity to each other and both elevating the Jedi to positions of greater importance than ever before, it’s difficult not to see The Phantom Menace and Vector Prime as heralding a new age of Jedi dominance, where conflicts are always resolved at the end of a lightsaber (usually wielded by someone named Skywalker or Solo). With every new novel, the franchise seems to take another step away from the careful balancing act of princess, farmboy, and scoundrel that made A New Hope so enjoyable.

Such a trend is undoubtedly an unfortunate one, for the franchise is still quite far from having exhausted all other possible types of characters to focus on, and it’s difficult to say that the story of any conflict is truly complete when we’ve only seen it through the eyes of a handful of its most notable participants. The perspective of the lowliest soldier serving in the trenches can often be just as valuable as that of the highest-flying pilot, or of the strategists and commanders supervising an entire front of the war.

While it cannot be denied that the Skywalkers and Solos have often been instrumental in ending threats to the entire galaxy, it must also be taken into account that those threats are galactic in scale, menacing millions of worlds and billions of sentient beings. Even if we continue to accept the Jedi as holding a monopoly on the heart of the story, there’s no real reason that they need to exert total control over the rest of the body, as well. Ordinary people are just as invested in saving the galaxy as anyone with robes and psychic powers.

Though Wedge Antilles may be a career soldier, we should not make the assumption that only those who stand at the forefront of the battlefield are worthy of our attention. The Pengalan Tradeoff, a particularly memorable short story by Aaron Allston published in Insider magazine, starred someone who might very well be the single least likely hero in the entire franchise – Republic Ministry of Finance accountant Joram Kithe. Though prominently featuring Jedi Barriss Offee on its covers, the MedStar novel duology focused heavily on the obviously M*A*S*H-inspired exploits of a Republic mobile surgical unit stationed on the planet Drongar during the Clone Wars.

While these types of characters may not have appeared in the saga, the Expanded Universe has not completely overlooked their existence. Though it was discontinued as a format some time ago, the Tales from series of short story compilations abandoned any pretense of grandiose spectacle in favor of fleshing out the lives of the saga’s living decorations: the characters who were created solely to give a bit of flavor to whatever exotic destination the heroes were visiting at that time. From the denizens of the Mos Eisley Cantina to the former owner of that skull Luke used to bring down Jabba’s pet rancor in Return of the Jedi, no character was too insignificant to weave a tale around.

Even the normally faceless legions of the Galactic Empire have something to offer us. Soontir Fel, Imperial starfighter ace, became one of the most prominent and popular recurring characters on the Empire’s side, eventually tying the Antilles family and the Skywalker-Solo clan together through his marriage to Wedge’s sister and his son’s (future Emperor Fel I) to Jaina Solo. Gilad Pellaeon, one of the most enduring fixtures of the Imperial Remnant and the Expanded Universe, steadily rose from playing sidekick to various warlords-of-the-week all the way up to the rank of Grand Admiral, eventually ruling over the Imperial Remnant as military dictator until his unfortunate assassination at the hands of rogue Jedi Tahiri Veila.

Though unfortunately short-lived, Agent of the Empire added more than a touch of James Bond-esque espionage to the universe in the form of Imperial Intelligence agent Jahan Cross, who remained a sympathetic and interesting character despite his service to an entity many normally consider evil. The Galactic Empire was an entity that reigned supreme over the entire galaxy for more than two decades, and it’s extremely doubtful that all of its servants were as sinister and malevolent as Grand Moff Tarkin. As long as we’re willing to accept that being on the side of the antagonists does not require one to routinely destroy planets for one’s personal amusement, there are a great many types of stories that we could tell about the cogs in the Imperial machine.

Characters such as those discussed in this article fulfill much more important roles than merely giving names to faces not worth a film’s attention, or starring in occasional experiments in attempting something different. Star Wars is, at its heart, a fairly straightforward story. Revolutionary in many ways, to be certain, but its primary focus is ultimately a very narrow one when compared to the scale of its setting. For a film, this isn’t necessarily a bad trait. When it comes to the Expanded Universe, however, ignoring these characters would be a truly tragic waste. While the conflict between Jedi and Sith may be the most memorable and iconic part of the franchise, it’s far from the only element capable of attracting and holding the audience’s attention.

When Fantasy Flight Games acquired the license to develop a new role-playing game based on the saga, they chose not to start with the Jedi or even the rebellion, but rather designed their first game around the galactic underworld, where players can be anything from Han Solo-esque smugglers to intrepid archaeologists and big game hunters. Ultimately, what we can learn from all this is that who your story is about is less important than how good a story it is: it doesn’t matter if your protagonists are Jedi or Sith, rebels or Imperials, soldiers or doctors, pilots or spies – if it’s interesting and engaging, then your readers will appreciate the effort and continue coming back for more.