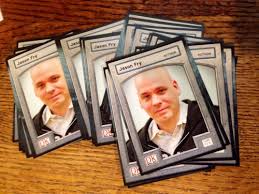 Getting back to the 500-pound gorilla, you and Ryder Windham were actually known to be writing Star Wars Rebels tie-in books well before the recent announcements; as one of the first people to write for the “new” canon, how has the process changed and how has it stayed the same? You’re known, of course, for working well with the EU, but is there more scrutiny on those little details now that they’d constitute a sort of “recanonization”?

The process for Edge of the Galaxy wasn’t really any different than a Clone Wars project. When I needed, say, a model of engine or a planet of origin for a character, I referenced existing continuity. I don’t know if there were discussions about that which I wasn’t a part of, but from my perspective it was a familiar process. Same thing for locking down the story treatment and revisions — I kinda hoped the Story Group would summon me to a chamber like the one where Ahsoka was on trial, but it was conference calls and emails. (Hmm. I guess they could have been dialing in from there.)

I should note, though, that Edge of the Galaxy is a fairly self-contained story — it takes place entirely within one region on Lothal, and while the characters have discussions that reference the Clone Wars, the rise of the Empire and galactic institutions, the story doesn’t have anywhere near the sweep of a reference book. So I don’t want to speculate on what the “rules of the road” are for the EU going forward, because I don’t know enough to tell you anything.

By the way, I hope we’ll talk about Edge of the Galaxy this fall. I had a ton of fun with it, it’s my first full-length Star Wars project that isn’t an adaptation or a reference work, 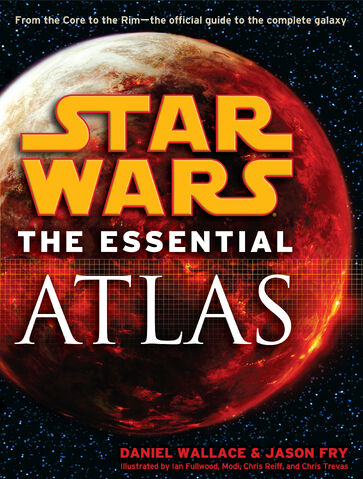 and it takes some new directions for a Star Wars story that I hope people will find intriguing.

I understand that LucasBooks is still working out a lot of the details themselves, but as someone with publishing experience, is it your opinion/ expectation that the recent Essential books will stay in print? And either way, do you think the Essential Atlas, for example, is still a valid resource for your own work?

That one’s above my pay grade. I can tell you that I recently turned in May’s Essential Guide to Warfare Author’s Cut and an Atlas appendix update, and both were business as usual.

One last question on that train of thought: the aforementioned Jay Shah, while remaining philosophical about the whole thing, has come to the conclusion that the canon has “lost” far more than many of us realize—not just stories, but fundamental data like Imperial rank badges, or the names of the cantina aliens, or even what species they are. In other words, recognizing that no one is likely to rename Ithorians just because isn’t the same as knowing they’re still called Ithorians. Do you think that’s fair, or is he overstating things?

Ask again in a year? I wouldn’t be surprised if Lucasfilm is still figuring out the extent of this and how to proceed. Clearly the Episode VII team has been given free rein with regards to what happened after Return of the Jedi, but does that necessarily mean that an Ithorian is no longer an Ithorian, Xim the Despot never existed and mynocks aren’t silicon-based life forms? Perhaps it’s that Ithorians are Ithorians and Xim existed and mynocks are silicon-based unless some story demands otherwise. Which wouldn’t really be that different than what we’re used to: Remember Ithor was originally somewhere in the neighborhood of the Senex-Juvex, but they moved it to accommodate the storytelling for New Jedi Order. I remember because I gave poor Dan Wallace the business about that one, long before either of us dreamed of an Essential Atlas.

As for the impact of no longer knowing an Ithorian is still an Ithorian, I’ll leave that for Jay to explore (Editor’s Note: and indeed he will! Check back this Thursday for more). It’s a good question, but I confine my existentialism to intensely important real-world questions such as who should play shortstop for the Mets.

Total left-field question—what is your reaction to the recent Wookieepedia controversy regarding their “breast” article? Is hyperinclusionism its own defense, or are there limits? 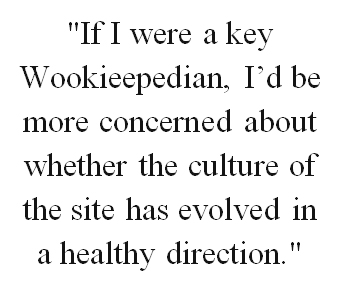 I watched that from the sidelines and was sad to see it happen. Whatever the status of the Expanded Universe, I love Wookieepedia and it’s been an invaluable resource for me. I’m grateful every day that it exists, and I know it only exists because a lot of people work incredibly hard on it as a labor of love. As for hyperinclusionism, sure it’s a bit silly but I don’t have a problem with it — aren’t wikis by definition hyperinclusive?

If I were a key Wookieepedian, I’d be more concerned about whether the culture of the site has evolved in a healthy direction. After the April Fool’s joke, there were a lot of people who spoke up to say they’d left Wookieepedia because they felt disrespected, marginalized or otherwise ill-treated – too many people, I thought, to dismiss out of hand. I was curious about that, so I poked around various talk sections and was taken aback by the lack of civility I found there.

Which reminded me of something. Years ago, I wrote an online adventure for Wizards of the Coast and included the old Imperial Troop Transporter. That was my favorite toy as a kid, so I was really excited to bring it into “modern” continuity. (It also shows up in my Rebels novel, because OBVIOUSLY.) I went over to Wookieepedia, found the entry for the transporter and dropped a note in the Talk section that I’d written an adventure that included stats for the vehicle – I didn’t change the article itself because I was afraid I’d mess something up. A little while later I saw there was a reply and rushed over eagerly to see what it was. It was someone saying dismissively that if I’d written this adventure, it wasn’t canon.

They figured out I was a “real” author and whoever it was apologized, but that wasn’t the point. I get that fanon’s a problem and policing it is a thankless task, but even if I hadn’t been a published author and those stats had been fanon, why treat somebody like that? Why not give them a gentle correction and steer them to some place that enthusiasm could be useful? I went from super-excited to contribute something to kind of sad and a little hurt, and I thought to myself, “I don’t think I want to be part of a community that treats new people like this.” And other than vanity-tending my own entry now and again and answering questions from Wookieepedians who ask, I basically haven’t been.

Wookieepedia’s awesome — I really can’t emphasize that enough. But even though Wookieepedia is unofficial, it’s a key “face” of Star Wars online, and that’s important. So I hope the folks who run Wookieepedia make sure people who visit the site have a good experience, and those who want to contribute feel valued. I mean, we’re all huge Star Wars dorks – even if we occasionally want to kill each other over warship classification systems, we have so much more in common with each other than with people who are like, “Oh yeah, Hans Solo – wait, there was a TV show?” So let’s stick together and be kind to each other.

And with that, our chat concluded. Be sure to follow Jason’s Tumblr for updates from his ongoing book tour, and keep an eye out for Star Wars Rebels: Servants of the Empire: Edge of the Galaxy (or SWRSotEEotG for short) this fall from Disney Lucasfilm Press, which is apparently a thing now.

One thought to “Checking in with Jason Fry, Part Two: Rules of the Road”