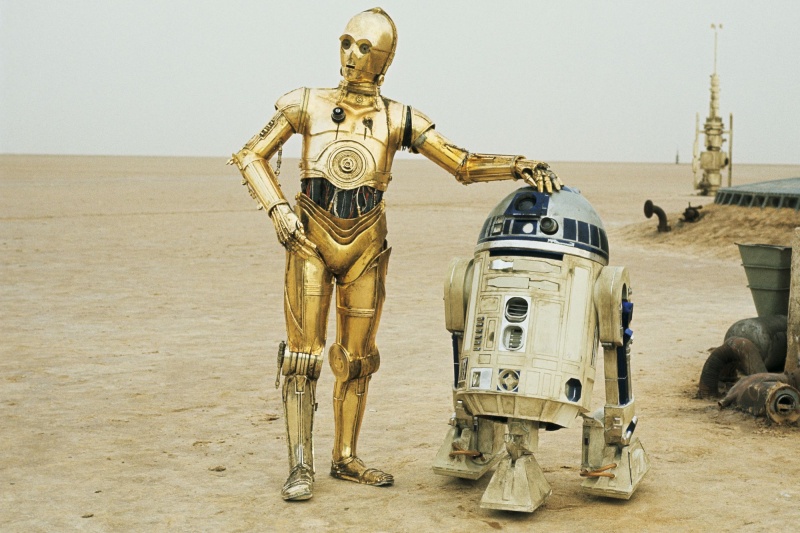 Droids are, perhaps, the single most taken for granted piece of technology in the entire franchise. They’re ubiquitous. Astromech droids, protocol droids, battle droids, surveillance droids, labor droids – if you can think of a type of droid, it probably exists and is widely used in at least one corner of the universe. And why shouldn’t they be? C-3PO is fluent in over six million forms of communication, is capable of performing complicated calculations of odds under any circumstances (gamblers would kill to have him around), and does it all while programmed with a passably human personality so as to put his masters at ease.

Excluding a certain lack of flexibility, he’s the perfect servant. The Separatists possessed battle droids in the billions or trillions or quintillions (depending on who you ask), who probably would have won the war in one film if they weren’t programmed for comic relief. When you have legions of cheap, replaceable soldiers who are absolutely loyal and obedient to you, who in their right mind would bother with recruiting or drafting conventional armies?

Able to perform nearly any task without risk to human life, the obvious question comes to mind: why aren’t the droids doing everything? The out-of-universe answer is, of course, because that would be an extraordinarily boring universe (compelling and fearsome antagonists, the Trade Federation’s foot soldiers were not). But what’s the answer in-universe? Think back to Wuher, the bartender in the Mos Eisley cantina. “We don’t serve their kind here.” What was it about them that prompted that peculiar response? Anti-droid sentiment, a holdover from the Clone Wars, as some sources put it down to? A fear that the hyperefficient thinking machines will steal his job? Or perhaps something older, a more insidious fear?

One of the many sources from which Star Wars drew its inspirations was Frank Herbert’s Dune, a setting in which machines like droids were forbidden for fear of what they’re capable of. Other early works of science fiction often covered similar themes of intelligent machines potentially being the undoing of their masters: Isaac Asimov, grown tired of endless robotic revolts in the science fiction of his time, created his famous Three Laws of Robotics as a guideline for his universe to prevent such a future from coming to pass. If a conflict of this kind had occurred in the galaxy’s past, similar to the droid uprisings and revolutions that have occasionally been mentioned in passing in the Expanded Universe, then that might very well explain why robotic labor isn’t more widely used and why some still dislike the eager-to-please menial machines.

As long as we’re talking about droids liberating themselves, it’s also important to think about the conditions they might attempt to free themselves from. In general, most seem to be treated as something akin to self-directing tools, and often have their memories wiped to prevent them from developing personalities. Restraining bolts (and the threat of their use) compel obedience in those that refuse to do as they’re commanded. Those rare few who do keep their memories or are programmed with personalities from the beginning are somewhat better treated, and looked upon as a favored family pet or (on a good day) friend.

They are, however, ultimately still property, existing to fulfill tasks that their masters are unable or unwilling to. The questions of their sentience and rights are rarely anything more than superficially explored, however, and few seem to care whether they’re truly equal to humans in self-awareness or are simply programmed to seem as such (leaving aside the question of whether the distinction is even relevant at their level of functioning).

If we accept that the former may be the case, then we must also accept the possibility that most (if not all) of the galaxy – including our heroes – have been complicit in an unimaginable atrocity for millennia. If you think the clone army was controversial, just imagine the consequences of acknowledging droids as beings equal to any human or alien.

The fallout would be tremendous, to say nothing of what would happen if the droids chose to end their bondage themselves – violently. One could pontificate endlessly about the possibilities and potential inherent in such a story, but I would be remiss in my duties if I did not also take the time to note the other (more positive) ways in which the roles of droids might be examined for our interest and amusement. The Ewoks believed C-3PO to be a god: given what droids are capable of, it’s hardly out of the question to wonder if there might be societies – alien or human – that voluntarily relinquished control of their worlds to machines, preferring their cold, impartial calculations to the fallibility of organics.

The Yuuzhan Vong clearly felt an extraordinary level of revulsion when facing droids (a case that was, unfortunately, not as thoroughly explored or resolved as it could have been), which raises the question of whether Star Wars has an equivalent to the Luddites. Are there others like the Vong who seek to destroy droids for one reason or another? Perhaps some even go so far as to seek to put an end to hyperspace travel altogether, and return the worlds and systems of the galaxy to the isolation of ages long past. If one wanted to raise the question of droid rights peacefully, our heroes might find themselves visiting an alien world in which droids are accepted as citizens with status and rights equal to that of any living being.

A droid’s perspective is one of the rarest to be encountered in the Expanded Universe, and yet despite that (or perhaps due in part to it), it remains one of the most intriguing from a conceptual point of view. For a setting that often seems to pride itself on inventing new threats to the entire galaxy, what menace could possibly be greater than the revolt of the ubiquitous servant machines against their masters? Few things strike greater fear into the hearts of the average citizen than the concept of their most trusted and faithful companions turning against them, and their most relied upon technology one day ceasing to be there for them.

When it comes to seriously examining the realities of living in George Lucas’ constructed universe, there is no question more potentially world-shattering to the lives of people throughout the galaxy than the status of their droids. If it were to change, nothing could be more revolutionary for the future of the franchise. I do not claim to hold the answer to the question of what the legal status of a droid should be, but I will gladly make the claim that there is no remaining story as important or potentially interesting to be told as this one. As long as we are to hold that the universe of Star Wars deserves to be as deep and believable as our own, it is not a subject we can afford to leave ignored.