The San Diego Comic Convention has come and gone. An expo celebrating everything nerdy and some things that aren’t, SDCC has become an ideal location for many companies to announce projects and give one of their primary audiences a taste of things to come. Marvel, Warner Brothers, and Legendary Pictures, among others, brought bits and pieces of upcoming films to build hype and help them put butts in seats. But one major filmmaker was notably absent from the proceedings. I’m speaking of course of Lucasfilm.

I exaggerate, however, because Lucasfilm was present at SDCC. They brought the cast of their new TV show, Star Wars Rebels, along with a closed-door look at the first two episodes, to follow up the show’s heavy promotion at this year’s Star Wars Weekends at Disney World. But, while cool enough, that was not all fan were hoping for. Perhaps the most anticipated movie of the decade, the as-yet-untitled Star Wars Episode VII, had no presence at the convention at all. The cast remained on set at Pinewood Studios, the crew remained hard at work, and no one in the Executive Producers’ seats deigned to give con-goers so much as a video message.

This isn’t entirely surprising. After all, the movie is only (as of writing) two months into principle photography, three at the most. That’s hardly enough time to put together enough footage for a proper trailer or even a short teaser, barring scenes filmed specifically for SDCC. And every day spent planning out, flying and sitting on a panel would be one less for the cast or crew to work at the studio or on location.

But, the question must be asked: why have we seen and heard so little from Episode VII since its announcement? Other blockbuster films announced in the same time frame, Avengers: Age of Ultron and Batman v. Superman: Dawn of Justice being the primary ones, had a massive presence at SDCC. The former not only had the entire

cast bar Scarlett Johansson and Joss Whedon there for a panel, props from the movie were on display and there was enough footage to put together a sizzle reel for the fans, short but apparently very sweet. The latter, while even further out from its release than Episode VII, had its three principle cast members present, revealed a few tantalizing shots, and even gave a 30 second teaser of a sort showing footage that, while likely not in the film itself, still brought the house down.

So where was Star Wars in all of this? Surely a short video message by JJ Abrams could be done a la their videos for the Omaze Force For Change charity fundraiser. Even a photograph of a set, or a cast member in costume, would have driven fans into a frenzy and shown everyone that the film is still on-track and looking good. We got more news about the first spin-off film, in a sidelong remark by director Gareth Edwards in a video he shot to announce a completely separate project, than we got for the first numbered Star Wars film in a decade. Could they really find nothing to do to tease con-goers with a glimpse of a movie that’s so anticipated that every even moderately juicy rumor about it immediately goes viral? Is Episode VII in trouble after all?

No, it’s not. Episode VII’s absence from SDCC is explained by a number of factors, and I submit that we’ve actually seen more of the film than most films this far into development have shown. Take, for example, the cast photo we had given to us a couple months ago. Did Avengers send out a picture of the cast reading the script together? We’ve also seen an entire set from the movie thanks to the aforementioned Force For Change videos, along with several props, which is about as much as we’ve seen from Batman v Superman if not more. Lucasfilm is being very canny with their marketing thus far, revealing things only when they know they’re ready for the public to consume. We had leaked pictures of starfighter props under construction long before we got the film of Abrams standing in front of a completed X-wing.

The relative quiet about Episode VII is far from unusual for blockbuster productions, even ones that aren’t directed or produced by JJ “Mystery Box” Abrams. In the run-up to Prometheus, we had nothing but rumors and hints of the plot, characters or setting until the first trailer hit the street. Batman v. Superman‘s predecessor, Man of Steel, and its predecessors, the Christopher Nolan-helmed Batman films, were kept so tightly wrapped that it took until nearly the films’ debut for even the full cast list to emerge. And, if we go even further back and a little closer to home, Return of the Jedi was passed off as the film Blue Harvest until late into production to avoid the ever-increasing costs of location shooting and frenzy of fans.

We should also be realistic when expecting a trailer or other footage to be shown. For posterity’s sake, principle shooting on Episode VII began in mid-May, with SDCC falling on the second-to-last week of July, about two months later. BvS for contrast started filming in the same month, and had its SDCC footage, all 30 seconds of it, specifically shot for the convention, as did Marvel’s Ant-Man, which will release before Episode VII and hasn’t even begun filming yet. While a short teaser from the initial Abu Dabi shoot was not entirely out of the question, the fact that it was not shown speaks again of the desire for Lucasfilm to control what is released to the public when, especially in terms of unfinished and out-of-context footage. It isn’t done out of malice so much as it is to protect the image of the brand by only showing what they want to show when they feel ready to show it. 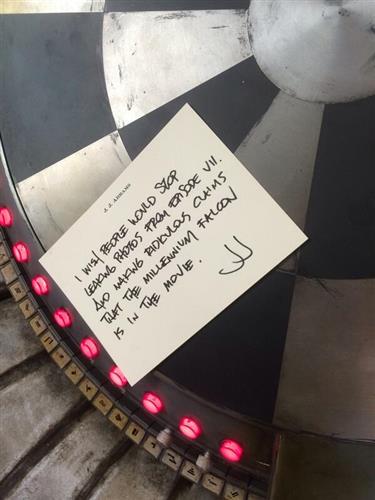 Then we have Abrams himself. A man whose movies are kept under tighter wrappings than an Egyptian mummy, Abrams is infamous for meticulously infuriating audiences with short teasers and viral marketing schemes. His Star Trek films for instance were teased out as slowly as possible, through websites, snippets of footage and cryptic interviews right up until their release. Even films he produces, such as Cloverfield, were given the viral marketing treatment, as much as possible kept from the audience going to see the movie before its release to preserve the movie’s impact and surprises.

The contrast between Abrams’ approach to marketing his films and the approach of Kathleen Kennedy, the new head of Lucasfilm and one of Episode VII’s executive producers, is pretty stark. Kennedy, in interviews after the announcement of the film, recognized the reality that the effort to keep a film completely secret in today’s age of ubiquitous internet and omnipresent cameras, is more or less impossible. She proposed that their production should embrace that and use it to their advantage to build up buzz for the film and keep the fans abreast of the development. Other blockbusters in recent years, like Brian Singer’s X-Men: Days of Future Past, followed this model, with Singer tweeting updates and pictures as they filmed. The Omaze videos, along with Abrams posting a few set pictures to his twitter to counter rumors and the younger cast members like Daisy Ridley and John Boyega recording their antics on both Twitter and Instagram, show that even in its early stages, Episode VII is a far more open production than anything Abrams has been involved with in the past.

Let’s make an educated guess when the first official trailer will make its debut by extrapolating the film’s production schedule and comparing it to another similar projects, Marvel’s Guardians of the Galaxy. Episode VII began its principle photography in May of this year after being announced at the end of October 2012 following Disney’s purchase of Lucasfilm, with an eye toward a summer 2015 release date that was ultimately changed to December. Guardians of the Galaxy began its principle photography in July 2013 for a release date in August 2014 after being announced in July 2012, though the script was in the works for much longer (Of course, who knows how long the Episode VII script was being worked on aside from George Lucas himself?). If you’re doing the math at home, that makes it two years from official announcement to scheduled release for Guardians and three years for Episode VII. Guardians‘ first trailer came out on February 18, 2014, a full four months after James Gunn reported filming had been completed and nearly seven months before the release of the film.

Backtracking to Episode VII, then, let’s calculate seven months from their proposed release date of December 18, 2015 to when we can reasonably expect to see an official trailer. That makes it mid-June 2015. Star Wars Celebration Anaheim takes place April 16-19, 2015, while San Diego Comic Con that year is July 9-12. My educated guess is, we’ll get an advance look at the trailer and possibly other footage at Celebration, with the trailer making its internet debut soon after. Its theatrical debut will be either with Age of Ultron on May 1st, Jurassic World on Jun 12th, or The Fantastic Four reboot on June 19th, and Lucasfilm’s presentation at SDCC next year will be focused on discussing the contents of the trailer (characters, the title, the plot, etc) and building hype for the first spin-off film.

Of course, we’ll get snippets and ideas of what’s going on long before that, just as we have with all of the other films I’ve mentioned. Maybe we’ll get more videos from the set with Abrams and co. Maybe John and Daisy will chronicle their adventures through short Instagram albums. Maybe an interview with a cast member will “accidentally” spill the beans. Who knows? One thing I and you all should know for sure, though: it’s too early to be worried about how well the filming is going. If we get all the way to next year and filming still isn’t done, then we can start hitting the panic button. For now, despite the writing staff change and Harrison Ford’s accident, filming and production are well within averages for similar films.