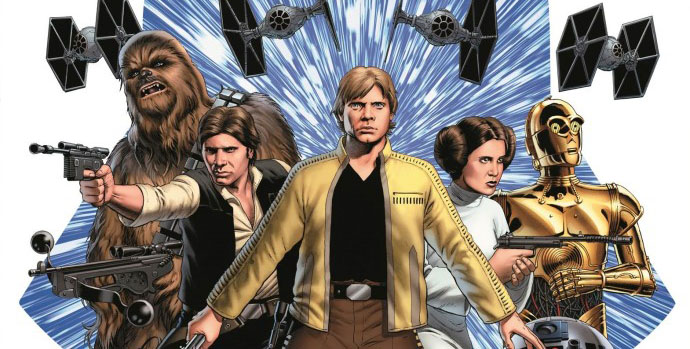 One of the more notable news announcements from the San Diego Comic-Con was the announcement of what Marvel would be doing with the Star Wars license. The immediate response over the next couple of days from the fans was dependent on which fans you talked to. Comic fans were intrigued by the creative teams announced, SW fans far more disappointed with the chronological placement of all stories announced. There was indeed a sense of: The EU-that-was got swept away for this?

What stands out most from Marvel’s announcement is the level of resources they are applying to SW. Canonicity or no canonicity, Marvel know Dark Horse held the license for twenty years and did a hell of a lot with it. They know a lot of stories were told, thus they have to start off big. At the same time Marvel may not have absolute freedom to act as they see fit. Certainly that would explain the apparent timidity of opting to set all their books after the first SW film, when Marvel have a sustained record of being considerably more daring and innovative. This is particularly so when you factor in that JJ Abrams, a very spoiler-averse director, is in charge of Episode VII. It may be, after his involvement with SW ends, that we see a more risky approach by Marvel but that’s eighteen months away.

A frequent criticism is that this period of SW has been mined countless times, to which a counterpoint is that there’s only seven stories to be told anyway. No, Marvel’s selling point is not going to be shiny new stories, it will be in the execution of stories. Anyone inclined to bet against Marvel’s creative trio on these books would be, in my book, quite, quite foolish. Why? Consider the track records of these particular individuals.

Kieron Gillen, along with his frequent artistic collaborator, Jamie McKelvie, took over Young Avengers at a time when that book’s original creative team, Heinberg and Cheung, had left it in an absolute pit. One team member dead, another left in despair, all to let the Scarlet Witch off the hook of genociding the mutants in House of M. Against expectations Gillen and McKelvie took the book in a storming new direction, they left all the angst, sturm and drang in that pit and set about running one of the most entertaining books in ages! What they did was give the book a whole lot of energy, they played with panel layouts, characters and it worked. People responded to the sheer exuberant enthusiasm of it all. When they brought the curtain down on the book last year, there was much dismay. There was also recognition that it’s better to have those unsullied, perfect fifteen issues then keep it going only for it to become a shadow of what it was.

Jason Aaron is, for me, the biggest wildcard of the bunch. His work has a far more gritty aspect to it, but he has also demonstrated a fair amount of range too. His Ghost Rider was an excellent half supernatural and half sheer gonzo mix. Wolverine and the X-Men was far lighter fare too. It is his current work on Thor: God of Thunder that is most relevant to how his SW run may operate. It was a surprise announcement a couple of years ago, but both creators – Aaron and Esad Ribic had excellent records. Aaron’s stroke of innovation was to treat Thor as a god and what does a god do? Hears prayers of worship and responds. He then paired this with another concept – what if there was a being going around killing gods? Cue a quite awesome eleven-issue arc that is but the opening shot of a run that will be able to match up to Walt Simonson’s legendary run.

Mark Waid has done a huge amount of work, too much to list, but his current major success of Daredevil is the best one to look at when considering how he might write Star Wars: Princess Leia. Daredevil has, for years, been dominated by a singular paradigm and outlook, that of Frank Miller. Not the Frank Miller of Sin City or the Goddamn Batman though! No, this work by Miller was done 20-30 years ago and it’s likely he wouldn’t recognize his younger self’s work. Miller’s Daredevil was a man up against it, couldn’t catch a break and was in a dark, dark world of, at best, temporary triumphs. It was a structure both Brian Michael Bendis and Ed Brubaker would continue with 15-20 years on, with Marvel then running it into the ground with a tale of demonic possession. When Waid was announced as the next writer, the big question was how could he possibly recover the character from the Shadowland fiasco? Waid’s answer was to decisively break from the old paradigm, to reinvent Daredevil as a swashbuckling crusader. To have the character demonstrate a lighter side, to be not be so grim and dark. To say it was a smash hit would be an understatement!

So can Gillen do something new with Star Wars: Darth Vader? More than likely! Can Waid give us an assertive and smart Leia without falling into the trap of rendering her as too aggressive? Highly likely. Can Aaron put together a combination that has not been seen before? I would not be surprised if he did. I have only given one successful example of each of their skills, but they each have far more than that to their credit.

From a commercial perspective, Marvel’s approach is a decidedly canny one too. By putting top creators on the books they are not just attempting to show they are a worthy successor to Dark Horse, but also looking to tap into the fanbases for each of those creators and the wider superhero market. Add into this picture Marvel’s talent for highly effective marketing and it’s more than likely to succeed in sales terms. What is also notable is Marvel do not look to be doing as much material as expected – three books, Star Wars launching first, then Darth Vader and then the Princess Leia mini-series. Nowhere is there any talk of the double-shipping they’ve tried for the last couple of years with mixed results. The approach looks to be quality over quantity.

Quality is certainly the name of the game on the visuals! Cassaday, Larroca and Dodson are all highly experienced and very well regarded artists. For all the cynic will quip that Cassaday will only do the one arc, the same cynic knows that it’ll very good indeed. Larroca and Dodson have stronger records for reliability, with the former pulling off the trick of doing all the issues for the Invincible Iron Man run he did with Matt Fraction.

Will it work? There is no way to know until the issues are coming out next year. That said, I can’t see this failing in sales terms, in critical terms? There will always be a section of fandom determined not to be won over on the new material no matter what. The rest will be a more varied mix of those who buy immediately, those who wait to see what the reception is or wait for the trade. I’m most likely to be in that last category. I’ve read comics of all kinds for over 20 years and there really is only one absolute truth: Whatever you may think, whatever you may wish to believe – you’ve never seen everything! There’s always something new, in some way coming around the corner, in a way you cannot ever expect.