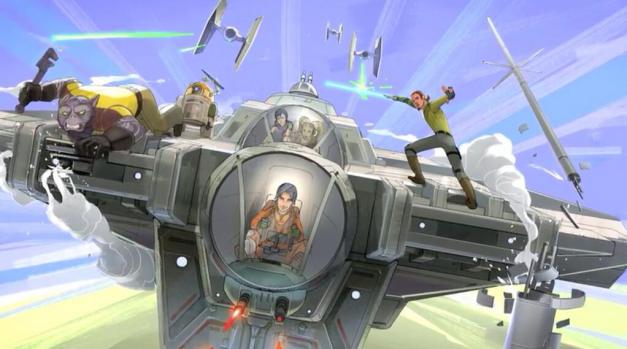 So now that they’re out, this seemed like a good opportunity to introduce our own walking, talking Rebels coverage machine—new staff writer and longtime contributor, Ben Wahrman. Ben has foolhardily (is that a word?) agreed to write a piece covering each episode of Rebels’ upcoming first season—since the premiere is two episodes, that’s fifteen pieces in total. Myself or others may weigh in here and there, but the plan is for Ben to be the backbone of Eleven-ThirtyEight’s Rebels operation.

Of course, longtime readers know that I pride myself on ETE not being a news site; on not simply grinding out off-the-cuff, reactionary material, and instead always taking a moment to consider the big picture. To that end, it’s important to note that under no circumstances will Ben be reviewing or recapping the episodes. As far as we’re concerned, if you need to know what happened, watch the damned episode.

Instead, Ben will simply be analyzing different aspects of the show as they reveal themselves from week to week; in a sense, he’ll be reviewing the entire series every week, and simply incorporating new information and shifting his focus around as he goes. I’m excited to see where he takes us.

In the meantime, Ben was gracious, or anxious, enough to start off by taking a brief look at each of the aforementioned shorts. So with no further ado, I’ll turn this thing over to him for his thoughts.

The Machine in the Ghost by Greg Weisman

The first of the shorts, and the introduction to Hera, Kanan and Chopper, also gives us a look into what sort of beings our new team of six will be. A quick note to make would be the casual informality of the main characters we see. Hera and Kanan bicker and snipe at each other all through their ordeal with no thought to the chain of command. Even Chopper, the mechanic who “speaks” in sounds, gets some snark in. Informality of that sort might be seen as a sign of poor writing, of an attempt to make the dialogue more contemporary, but that likely wasn’t the intention.

While the prequel films focused around a very ceremonial Jedi Order who sought to remove the influence of emotions, as well as a collection of politicians who were a part of a very formal and storied government, the original trilogy balanced the formal, organized and oh-so-British Imperial troops and officers with the more rag-tag Rebel Alliance, who contrasted further with the “scum and villainy” of Han and other roguish types. Rebels shoots for the lattermost perspective, but with an even further bent than the films themselves (not the least because George Lucas is no longer lending them his somewhat stilted dialogue).

The cast of Rebels is made up of a street thief, a freedom fighter, a wanted criminal, a patchwork droid, an angry loner and a rebellious teenager. Nothing in them or about them would be formal. Having their speech patterns and dialogue be casual and more contemporary, complaining about this or that and giving and taking from every level of the hierarchy, shows that we aren’t dealing with the elite of the galaxy anymore. We’re dealing with the dregs of the galaxy, a clustered collection of messed-up beings who will, despite themselves, become heroes.

Sabine Wren is the character we know the least about of the Rebels main cast. Kanan has the spotlight in the book A New Dawn, Hera’s past is cloudy but still easy enough to predict, Zeb tells his own story in the book version of Entanglement, Ezra will likely be the focus of the entire first arc of the series itself, and Chopper is, well, a droid. All of them at least have an established (or hinted-at) backstory and a reason to be fighting the Empire. But Sabine doesn’t. Sabine is a character with no real history, no background (as of yet) and no real motivation.

Her appearance in this short does little to establish anything for her beyond a vague personality and her capabilities in the field. She’s a Mandalorian teenager, young and impetuous, but highly skilled and dangerous. She mocks Imperial troops to their face without any apparent fear, and not only manages to avoid showers of blaster fire, but also humiliates an entire patrol of troopers, covering them in paint rather than killing them.

Without seeing much else of her to this point, it’s hard to say what of her actions are a part of her ongoing character. Is she more reluctant to kill than her fellows at this point, thus the paint bombs? Is she fighting the Empire for any particular reason or is she simply a thrill-seeker? Will she remain reckless and continue to make fools of the Imperial soldiers she comes up against, or will the realities of the Dark Times set in? We’ll have to wait and see how deep Sabine’s character runs. Here’s hoping that there’s more than meets the eye.

When Lucasfilm announced the voice cast for the main heroes of Rebels there were two names that immediately stood out to aficionados of animated media. First was Vanessa Marshall, who plays Hera Syndulla, and has voiced Wonder Woman, Black Widow, Mary Jane Watson, Batwoman and many, many other characters. The other well-known voice is Steve Blum, who plays Zeb, the subject of this short.

Let’s talk about Steve Blum (rhymes with “gloom”) for a moment. He’s been a voice actor for over twenty years now, in projects ranging from anime dubs to western animated projects and video games. Lots of video games. He won accolades for his work as Spike Spiegel in Cowboy Bebop. He’s Starscream, the Green Goblin, Amon, he’s the animated Wolverine. His credits are far too numerous and diverse to list here. He’s done work in the Star Wars universe before, but never as someone this prominent.

Zeb Orrellios plays like an eclectic mixture of Steve’s roles, partially because there have been so many of them. Zeb has Wolverine’s eagerness to fight, a bit of Spike’s casual charisma, and the raw strength and bulk of Killer Croc. Zeb’s depth, though, comes from his past, the losses he’s suffered and the lives he’s seen taken from him by the Empire. Playing an angry loner who just wants to hurt someone wearing white might seem like typecasting, but it’s Steve Blum’s experience in that same sort of role that makes him the perfect actor to give us Zeb’s emotional heart in the midst of cracking heads.

Not What You Think (Property of Ezra Bridger) by Simon Kinberg

There is little an adult audience for a media series fears more than the advent of a young protagonist. Media built for a young audience thrive on having youth (or child-like adults) in leading roles, characters for their audience to still “relate to”. For the more mature audience, though, having a shrill-voiced kid tag along is a sure sign of shark-jumpage. An important distinction is how those youth roles are written and acted rather than the characters’ ages themselves. Anakin Skywalker’s age in The Phantom Menace isn’t nearly the sticking point his horrendous dialogue or delivery are, for instance.

Ezra Bridger, the Aladdin-esque street rat that this particular short introduces, will inevitably be a point of contention for a lot of viewers, just as Ahsoka Tano was for viewers of The Clone Wars. He’s young and he he has what the kids today call “swagger” but most adults call “insolence”. His lack of respect, unorthodox weaponry and very adolescent view of an authority he doesn’t respect make him an easy target for critics of the show before it has even started airing.

The rub of the situation is this: Ezra is, at least at this stage, the protagonist of the show, and Rebels as a whole will live or die on how the audience responds to him.

So what can save Ezra, and in turn Rebels, from a raging horde of angry, discontented adult fans? Nothing less than good writing. If Ezra is treated the way an adult as sarcastic as Hera or world-worn as Kanan would treat a kid in their situation, with compassion for his losses but no tolerance for his shenanigans, there is much humor to be had. If his character is created to grow and mature, to present its young audience with someone they can relate to as he grows up rather than remaining young, that will go a long way to endearing him to older fans as well. As with Sabine, only time will tell whether this pans out over the show’s run.