More thorough explanations of my personal Diversity Scoring system can be found at the above links, but as this constitutes the beginning of a new series, I’ll reiterate very briefly—a Diversity Score is the percentage of characters in a story who are anything other than straight, white, human men. Historically I’ve gone off a given story’s Dramatis Personae (the cast of characters often presented at the beginning of a SW novel), but as I’m attempting to be as thorough as possible, my new policy is to count, as best I can, all named characters. In the case of the six films, given their status as the most visible and inviolate elements of the canon, I have gone by the full casts as listed in their end credits. While I presented rough scores for the saga (as well as The Clone Wars) back in May, I’ve since had the opportunity to work straight from the films (as opposed to Wookieepedia) and I present the following as my final scores for the Star Wars Canon. 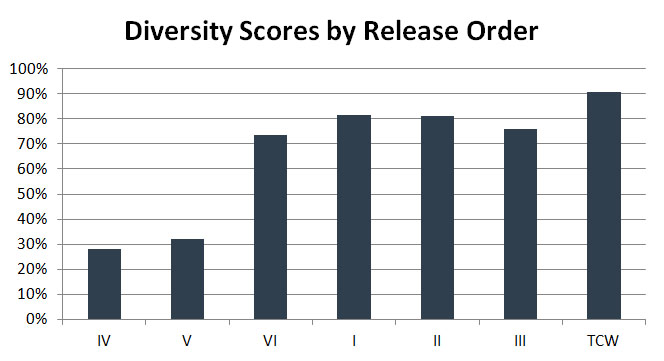 As you can see (and would likely have guessed) the number improves steadily in line with release order, culminating with an impressive score of 91 for TCW’s enormous cast of 327 named characters. [1]Full disclosure—I’m still going by the wook for this one. Add salt according to taste. The six films’ average score is 62, which is roughly in line with the typical score for a book in the Legends universe—meaning that the “average” cast of a Star Wars story can be said to consist of two white human men (hereafter WHMs) for every three characters of pretty much any other description, including white human women, who would otherwise undoubtedly be the next-biggest single demographic. Note that I ostensibly count gay characters in favor of a story’s score even if they’re otherwise WHMs, but to date only two characters have fallen into that category, and both are no longer canon. Oops.

And that brings us to A New Dawn (fair warning: while I won’t be discussing the plot of the book, some may consider the following info spoilers). Out of twenty-one named characters, the cast includes nine WHMs, for a Diversity Score of 57. That’s not awful, but for the beginning of this brave new world of Star Wars canon, one can’t help but be a little disappointed by even an average score. As such, I thought this would be an interesting opportunity to delve further into the makeup of those nine WHMs and how they stack up as new Star Wars characters. In no particular order, they are: Obi-Wan, Count Vidian, Ensign Cauley, Okadiah, Skelly, Hetto, Tarlor Choh, Baron Danthe, and Commander Chamas. Let’s look at them a little closer, shall we?

If you’ve read the book already, the first thing you might be thinking is that most of these are never definitively described as white—in fact, only Tarlor Choh is described directly as “light-skinned”. Beyond that, we have Vidian’s natural hair color given as “rust-colored”, the older Okadiah as white-haired, Skelly as a redhead, and Danthe as blonde. While it’s fair to admit that in Star Wars (or even the real world, really), hair color doesn’t prove anything one way or another, it’s interesting to note that for many human characters, it’s the only hint we’re ever given as to their genetic heritage. Furthermore, there are four characters beyond Choh whose skin color is mentioned directly: Kanan’s is “ruddy”, Rae Sloane’s is “dark” and “brown”, and most interestingly, Depa Billaba and an unnamed mayor on Gorse, both of whom barely warrant mention at all, still manage to earn reference to their “tan” skin.

That’s not a bad thing, of course; in fact, what it suggests to me is that John Jackson Miller, or his editors, made a special effort when applicable to acknowledge the presence of a nonwhite human. It is, however, a double-edged sword—because it therefore strongly implies that a character whose complexion isn’t mentioned is therefore almost certainly white, an assumption only bolstered by subsequent references to blonde or red hair. Further, one thing my study of the EU has made abundantly clear is that characters whose appearance is left even remotely ambiguous (to say the least) are invariably assumed to be white by readers—and in many cases, when those characters happen to receive an artist’s rendition months or years later, said rendition goes ahead and confirms it. It is for these reasons that I long ago made the decision to count characters of ambiguous appearance as white.

It’s not a perfect system—an excellent book can have an awful score just as easily as the opposite. There are simply too many factors to consider to categorically call any book a success or a failure when it comes to diversity. Like the Bechdel Test before it, the goal here is only to establish larger trends and raise awareness of what I see as an ongoing concern; a Star Wars book full of white folks can still be excellent, after all, but that doesn’t mean it doesn’t matter.

One last thing that’s worth noting—having read much of JJM’s work by now (including his awesome original story Overdraft: The Orion Offensive), my personal view is that he’s actually doing some of the best SW work of the last several years in this area; far better than his raw numbers tend to show. As I mentioned earlier, you really do feel that he’s making a point to acknowledge people of color whenever he can. And women in general, for that matter: as Jay Shah pointed out in his analysis of the book, one particularly encouraging scene includes a three-quarters-female stormtrooper squad, the likes of which was all but unheard of in the EU. Also notable: among the non-WHMs are not one but three Besalisk characters, each one more distinct and memorable than the last.

And of course, there’s Rae Sloane—or as Jay might call her, the story’s true protagonist. To my mind, Sloane is to the new canon what Captain Pellaeon in Heir to the Empire was to the EU; namely, our first look at the face of the “average” Imperial. Where Pellaeon—though a great character—was a gruff older man who’d been serving for fifty years, Sloane is young, sharp, and ambitious. Her generation is even referred to in the novel as the “New Imperials”, meaning people who came of age post-Revenge of the Sith and were free of the baggage of the Old Republic.

Oh, and she also happens to be a fully formed, three-dimensional black woman. Ask JJM about her (which we did) and he’ll wave it off, because he’s gracious like that. “I wasn’t trying to make any kind of statement,” he told us. “I didn’t think twice about including [her], because in-universe, it made perfect sense.” He added, “It wasn’t something I was told to do and I wasn’t seeking to make any kind of imprint on the larger canvas; I’ve just always written diverse casts and was simply continuing that practice.”

While I’m happy to take him at his word, at some level, this kind of thing never just happens—someone, somewhere in the chain from author to publisher to owner, has to want it. Deliberate or otherwise, Sloane’s presence front and center in A New Dawn does indeed make a statement; all that remains is the follow-through. I’ll be watching.

6 thoughts to “The Minority Report: A New Dawn”