There were a great many children around, many of whom wore Clone Wars-era costumes, and so much evidence that the next generation of Star Wars fans are present and in good hands. The kids who are getting into Star Wars today are seeing a more diverse fandom than we’ve noticed in the past, and they have so many eras of compelling stories to bring them in. There were parents taking their children to Del Rey’s booth, children going to the Disney Publishing booth on their own, and lots of vendors with Star Wars toys that caught the eyes of children and adults alike. Especially with the announcement of new books and movies, Star Wars is still bringing in a whole new generation of fans. The very fact that Star Wars fandom is being passed down the generations says something about just how iconic the GFFA is to American popular culture; even those who wouldn’t consider themselves geeky at all can probably name at least a few major things from Star Wars and Star Trek. The children who are being brought into the fandom now are its future, and I look forward to meeting all those kids who’ve grown up on the Sequel Trilogy with the same wonder I had when the prequels first made it to theaters. 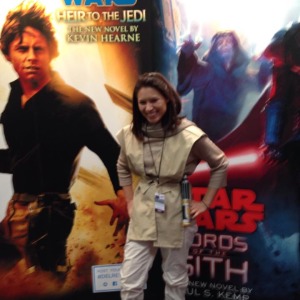 I spent part of Saturday hanging around at the Del Rey booth, trying to look like part of the scenery. Eric Geller of theforce.net and I watched the congoers while Darth Internous talked to fans, and let’s just say interest in the literary world of Star Wars is alive and well. The most commonly heard question was “Do you have Tarkin yet?” The answer, of course, was “not until November 4th,” though we were sitting right under a Tarkin poster. Right across from the booth, a poster of the cover art from Heir to the Jedi and Lords of the Sith watched us, and the visible presence of such iconic characters brought in the passers-by. Plenty of congoers asked about A New Dawn, and even more asked about where to start in the already-published Legends-verse. Seeing Heir to the Empire for the first time in person with the Legends banner was odd to me, and the blend of old and new was particularly highlighted. One copy of Death Troopers didn’t have a Legends banner, and seeing everything from the Han Solo and Lando Calrissian Adventures from long ago, to Crucible, showed just how expansive of a universe Star Wars is. There was something for everyone on that table, and the new potential fans were greeted with a very important question. “What do you like to read about?” Every time someone asks me where to start in the Star Wars EU, I always ask that very question. There’s a place in Star Wars for everyone, and from the variety of fans we saw over the weekend, that will continue to be true for many years to come.

The bloggers and podcasters gathered early for the A New Dawn panel. We all sat together, with phones and computers and tablets ready, and relayed the panel to all of our readers back home. We got a picture of Star Wars publishing: despite having been rebooted, it’s still vibrant and there are no concerns about its future. Yes, it was mentioned that Palpatine has a first name. These first five novels- A New Dawn, Tarkin, Heir to the Jedi, Lords of the Sith, and Dark Disciple- are all rather different in tone and style, and are being written as a collaboration between Del Rey, Lucasfilm, and Marvel. We as fans were both reassured that Star Wars publishing is in good hands, and that we have many excellent stories forthcoming with the same variety that previous Legends publishing had.

Standing in line is a vital part of any convention, so we hung around and waited for the Rebels panel. The auditorium was absolutely packed. Funny enough, the Rebels panel was held in the same place that the announcement for Rebels was made last year- the Empire Stage. In the course of the panel, we learned that Jason Isaacs set up a mini-golf course in the recording studio and Vanessa Marshall likes bananas, and perhaps a bit of information relevant to the show.

Finally, at the end of the Rebels panel, we got a special surprise: a new episode. We were all asked to put away our various electronic devices and just watch, and let’s just say I ended up with multiple excellent article ideas and a desperate need to tell the entire internet how excellent this show is. More about this later when this particular episode airs. 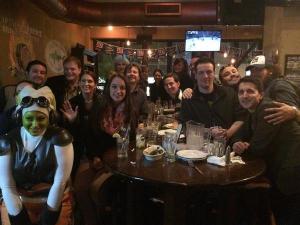 The highlight of my weekend, by far, was Saturday night’s dinner. A bunch of us went out and talked Star Wars over dinner and drinks, and were joined by some notable people. John Jackson Miller and Vanessa Marshall came to dinner with representatives from many fansites, blogs, and podcasts, as well as a Hera and Kanan cosplaying pair. In one corner of the restaurant, we stayed up altogether too late discussing Star Wars, fandom, and many other things.

NYCC is an experience, even after having been there for three years. It took me almost a full day to recover, and now all I can think about is when tickets go on sale for next year. Where else can you have all the latest and greatest news from your favorite media in one place? For anyone considering attending next year, buy tickets early- and then, you get to spend an entire weekend thinking only about fandom. It’s worth it to be there for all the breaking news.