But I’ve never actually made it through one from cover to cover. And as I neared the end of Tarkin, right around the time a character stops what he’s doing to give an extemporaneous three-page summary of a piece of the title character’s backstory, it occurred to me that this must be what it feels like.

James Luceno’s latest Star Wars novels are, let’s face it, not for everyone. One of my earliest memories of really taking notice of his writing style—as opposed to just absorbing a story on autopilot—was near the end of The Unifying Force when he took a moment to list every single Jedi present on Zonama Sekot; ostensibly, every single member of Luke’s Order at that time. As a continuity dork, it was cool to see random characters like Klin-Fa Gi get shout-outs in a major novel, but even way back then I remember being somewhat pulled out of the narrative by the big paragraph-long infodump of names.

As time went on, though, Luceno’s role in Star Wars became less and less “novelist” and more and more “continuity guy”. Starting with Millennium Falcon, and continuing into Darth Plagueis and now Tarkin, he’s become the franchise’s unofficial in-universe biographer, laser-focusing on one character (or, well, spaceship) and writing exhaustive accounts of their lives across several decades, often—to me, at least—at the expense of creating a compelling central plot. 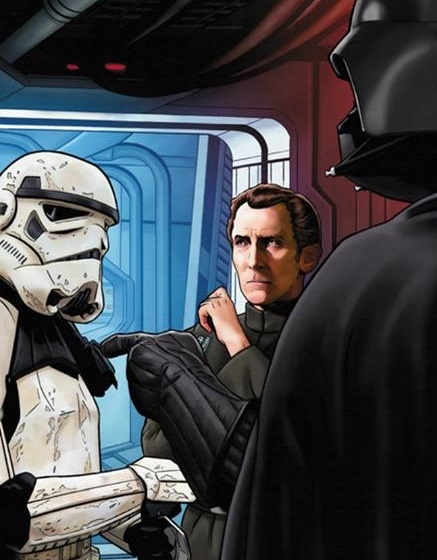 In the case of Tarkin, the central story of Teller and his group of renegades stealing the Carrion Spike and cutting a swath through the Empire with it was actually pretty interesting—but ultimately I think I would’ve preferred a novel of just that. The several proto-Rebel characters traveling together aboard the Spike, while delightfully diverse, receive only scarce hints of characterization, because they’re too busy talking about what a dick Tarkin is to tell us much about themselves.

The book is structured, as I’ve enjoyed pointing out once or twice already, much like a typical Walk the Line-style biopic; the Carrion Spike plot takes up around three-fifths of the running time, as it were, and is broken up every chapter or two by flashback sequences—or as I noted earlier, extended single-character diatribes—delving into Tarkin’s past. The confounding thing about the book is that much of this material is great in and of itself; not only did I find the rebels’ origins compelling (once we finally got them), but young Tarkin and the forces that shaped him were handled very well, and it was, as Vader might say, all too easy to hear Peter Cushing’s haughty tones delivering his lines, even in moments where he’s ostensibly a much younger man.

But ultimately, all the jumping around, and the rote delivery of background data, made it hard to get swept up in the book the way I often do; even with crummy books, I tend to read the second half way faster than the first by virtue of all the exposition being out of the way, but it was the opposite with Tarkin, as my initial excitement eventually gave way to a half-interested trudge.

Tarkin is by no means a crummy book; I don’t want to be too critical here. But it doesn’t seem to know quite what it wants to be—and the end result is somewhere between a dry, monotonous novel and a stirring, novelistic Essential Guide.

So I guess what I’m saying here is, I think that they should just start giving Luceno the reference books. I don’t mean that as a slight against Jason Fry, Daniel Wallace, and company; to whatever extent that the Age of the Essential Guide has now come to an end, they clearly extracted every last drop of potential from the concept and went out at the absolute top of their game. But once the sequel trilogy is unfolding and the universe has built itself up again, do we really just want more of the usual character and planet guides all over again?

I say, just go for it and make James Luceno the official in-universe biographer. Free him from the demands of traditional narrative and start billing his books as in-universe documents akin to the latter-day Essentials (or the recent Imperial Handbook). For my money, Tarkin would’ve been way easier to follow, and more compelling, if it had started with the character’s youth and gradually built him all the way up into the Tarkin of A New Hope, rather than jumping all over the spectrum and checking boxes—childhood, check, government work, check, Clone Wars, check—and never coming anywhere near the end of his life. Let me say again, I like what Luceno is doing; I just don’t know that this is the most effective way for him to be doing it.

And in the meantime, that standalone story about the Carrion Spike rebels? Give that one to Jason Fry.

4 thoughts to “On Tarkin, and the Novel as Reference Material”