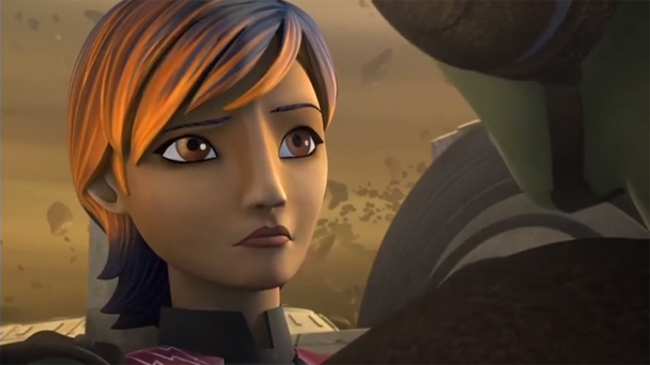 The issue with this is that sometimes plots and ideas can be brought up and not referred to again, especially if the show has numerous characters and ideas moving in all directions. One has only to bring up Firefly or Star Trek: Enterprise or one of numerous other examples to instantly make science fiction fans fume at the potential that was wasted with plots and ideas that went nowhere, either because the show was canceled before its time, or because the showrunners did not handle their own creations well.

As Rebels has progressed, there have been questions brought up and characters introduced since before the pilot. A few have been fleshed out or answered, some in the tie-in material and others within the show itself, and others have been left alone for the time being. But there is another layer of deeper thinking and plotting that has yet to be unraveled. Out of Darkness on its surface is a filler episode along the lines of Fighter Flight, a duo-focused action/survival story. However, there is an undercurrent of seriousness that the earlier episode did not have, hints of a deeper scheme underlying the show’s hitherto light plot.

Sabine is our audience surrogate for this part, demanding to know who Fulcrum is, what the larger plan for the Ghost‘s crew is, pleading with Hera to somehow show that their actions are making a difference in the larger galaxy. The audience, especially its older and more experienced viewers, have already raised these questions or questions like them, and to hear them voiced within the show itself reassures us that there is a plan to answer them. The pull of that sort of overreaching plot will keep people watching, tuning in to see what sort of answers are brought up.

There is a good deal of reality subtext when Hera responds to Sabine. She cannot explain everything to Sabine for fear of her safety and of the safety of their mission. The Empire, she says, can make anyone talk. All she can do is ask Sabine to trust her that what they are doing does have a greater meaning than just blowing up a convoy here or there, that in time, things will come into focus and her questions will be answered. But for now, only she and Kanan know the full truth. Just as the show’s creators are asking the audience to trust them, to trust that there is a greater plot, a bigger picture that we, for now, do not see.

The plot is not the only mystery this episode brings into sharper focus, however. Sabine has secrets of her own, not from Hera, but from the audience, secrets that, when she hints at them, instantly make her a more intriguing and interesting character. What happened to her at the Academy? Why did she leave Mandalore? How long was she on her own before Hera and Kanan took her in? What did she do that so soiled her on blindly taking orders? Maybe the show will answer these questions, maybe it will be left to a tie in book a la A New Dawn.But it is the mere existence of these sorts of questions that gives Sabine some of the depth that she desperately needed.

While giving Sabine and Hera a smaller, focused episode to themselves may seem like a misstep so soon after Fighter Flight, it works because it allows the show to grow its own plot from within, organically. What Out of Darkness does well is pose questions without giving answers, but not questions that will make the show lock new viewers out with continuity. It adds depth to the overarching plot and to the characters while still keeping the status quo intact, meaning later plots and actions will have more meaning and weight.