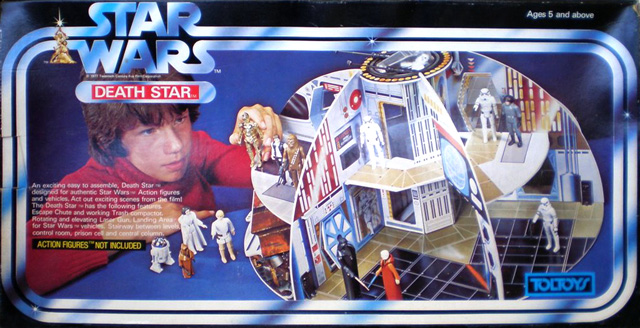 It’s almost impossible to present a coherent timeline of the myriad versions of the story that exist in what is now the Legends continuity; I’m going to do my best, but it should be noted that where events flatly contradict each other it’s generally accepted that there were multiple sets of plans floating around that only formed a complete picture after being assembled. Whether Artoo had all of them during ANH or just one piece is also debatable.

21. Who stole the plans for the first Death Star?

To begin with, the story can be divided somewhat roughly into two halves: let’s call them Danuta plans and Toprawa plans. There’s room, I believe, to view them as one and the same, but in addition to various inconsistencies in the sequence of events, Danuta sources tend to treat the plans as a physical object that has to be obtained, while Toprawa sources focus more on data, seemingly more in accordance with the ANH line “several transmissions were beamed to this ship by Rebel spies”. Are those characterizations mutually exclusive? Not really, but I think it makes the whole shebang a little simpler to digest.

Another thing to note is how many times various Rebels are depicted as first learning of the Death Star’s existence; for a long time it didn’t appear that they knew anything at all about it until the last year or so before ANH, but more recent material, in particular The Force Unleashed, has depicted it as much more of an open secret to begin with—which makes a certain amount of sense given the resources required for a construction project of that size. Luckily, it’s still not the kind of thing people would be eager to shout from the rooftops in those early days, so most stray “oh my god, what’s this thing?” moments can be viewed as simply the character in question learning about it—and/or learning about the superlaser, and/or realizing just how big it actually is. One early Rebel raid on Corulag, led by Han Solo (don’t ask) and presented as general information-gathering rather than an actual grab for the plans, appears intended as the first time the Rebellion learns of the term “Death Star”, but I wouldn’t bet the farm on that holding water.

The earliest point where actual plans come into play seems to be a prison riot on the Death Star itself, led by an unknown Jedi, wherein captured Rebel operatives managed to transmit the station’s schematics to a base on Polis Massa before being gunned down. What became of these particular plans is unclear.

Some time later, another set was delivered to Danuta from the station’s construction site above the prison planet Despayre, after architects at the Imperial facility on Danuta had requested them, for…reasons? This information came to the Rebels’ attention via operative Rianna Saren, who had been a prisoner on Despayre only to escape onto the Death Star shortly before it destroyed the planet as a test of the superlaser’s capabilities. Meanwhile, another set of plans was sent from the Death Star’s library (no, really, it had a library) by sympathetic functionary Atour Riten, though the fact that Danuta became important appears to be a coincidence.

Rianna Saren escaped from the Death Star and headed to Danuta herself, but was beaten there by Rebel agents Kyle Katarn and Jan Ors. What’s interesting here is that Saren’s story actually had the wherewithal to utilize both Danuta and Kyle Katarn, elements from much earlier sources, but still insists on giving Saren her own mission to recover the plans on Danuta, meaning that both she and Kyle do exactly the same thing in exactly the same place one after another. In any event, that’s one copy down, though later sources would retcon—ah, I mean clarify—that these plans were indeed just one piece of the puzzle.

Around this time, Red Squadron pilot Keyan Farlander captured Imperial satellites that were then used to intercept a transmission containing the plans. While this would seem to pair best with Atour Riten (since his were sent to Danuta as a standard Imperial data transmission), Farlander’s story has also been tied to later events on Toprawa, so I’m putting it here just to split the difference. Farlander’s plans were sent to Rebel outpost AX-235, and then on the the Rebellion proper via the shuttle Maria. Whether the Maria went to Toprawa or rendezvoused directly with the Tantive IV is an open question.

But there’s one last piece in play: a data disk containing the plans was stolen on Darkknell, and Bail Organa sends fellow Rebel senator Garm Bel Iblis to retrieve the disk from the thief at any expense. Securing the disk ends up blowing his cover as an upstanding Imperial politician, and having just lost his family as well, Bel Iblis goes into hiding, starting up his own Rebel cell. This story exists in a handy little bubble, as it doesn’t directly involve basically anything else we know about the plans—so feel free to stick it anywhere.

Meanwhile, Princess Leia picks up Rebel agent Basso on Ralltiir under the guise of one of those “mercy missions” Vader mentions. Basso, somehow, has had the plans stored in his brain via hypno-imprinting (which sounds silly but goes all the way back to Brian Daley and the radio drama, incidentally). Straining her diplomatic credentials to the breaking point, Leia eventually makes it back to Alderaan and delivers Basso to Rebel technicians who are able to extract the data.

While that’s going on, big Imperial muckety-muck Lord Tion drops by the Organa household for dinner, so that he can ask Leia to marry him. This really happens. Tion has one too many, and Leia maneuvers him into bragging about the huge battlestation the Empire has built—but then Leia goofs and uses the term “Death Star”, which she shouldn’t know. A scuffle ensues, and Tion goes down, but the jig is up: Leia heads off to Toprawa to pick up the plans before the Empire starts investigating what happened at their dinner table. Over Toprawa, Rebel forces successfully raid an Imperial convoy to—you guessed it—steal the Death Star plans, but they’re stuck in-system and their comm equipment isn’t strong enough to beam the data out, so an offensive is launched against a research station on the planet to secure its comm relay.

While Bria Tharen and her Red Hand Squadron secure the communications center, newly-minted Rebel agent Havet Storm fights his way into the research area in order to, say it with me now, steal the plans. This set actually has the distinction of being identified specifically as the superlaser schematics, so y’know, that might have been an after-market part or something.

After nabbing the plans and battling his love interest and her dad (don’t ask), Storm makes it to communications in time to personally transmit the plans to Leia, who’s stalling for time in local space by having R2-D2 feign hyperdrive repairs. The transmission is completed just as the orbiting Star Destroyers—including Vader’s Devastator—stop playing nice and destroy the comm tower. Storm’s team, which may or may not be the same as Tharen’s team, plant explosives throughout the building and destroy it, and this is where it gets really wonky. The Rebels destroy the building, but at the same time, Red Hand Squadron is deliberately holding their ground—inside the building—for as long as possible as Imperial forces close in. In the end, Tharen’s entire team is either killed in the fighting or takes suicide pills to escape interrogation…but Havet Storm, the guy who literally transmitted the plans, lives and makes it off-planet. How? Shrug.

Anyway, with that done, Leia hightails the Tantive IV into hyperspace with the Devastator in hot pursuit—and the rest, as they say, is Star Wars.