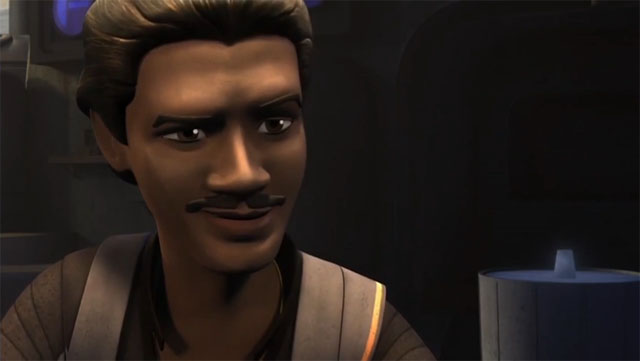 Bringing an established character into a show has a twofold benefit: first, and foremost, is to give the show extra publicity, but second is to shine a new light on characters from the show’s ongoing cast by having them interact with a more well-known or famous entity. In the case of Rebels, in the first season to this point, we have appearances by Darth Vader (in Spark of Rebellion’s primetime cut), C-3PO and R2-D2, Bail Organa, Luminara Unduli (of a sort), Yoda and, in this week’s episode, the one and only Lando Calrissian.

As with Frank Oz’s return to his role as Yoda, having Billy Dee Williams back to play his most memorable role is a treat. But how much is too much? How many appearances from elsewhere can Rebels sustain before it becomes more about what guest will show up next than about the characters who are ostensibly the main cast? Just how far will suspension of disbelief stretch that all of these characters we already know just happen to have run-ins with the crew of the Ghost at some point?

That answer will vary from viewer to viewer. Some people will take it to mean that the show is creatively bankrupt and has to lean on characters who already exist to prop itself up. Others would say that such appearances are not crippling, but they are unnecessary, limiting the show’s scope by using an existing character when an original character might fill the role just as well. Still others would bemoan that the show is wasting time with these sorts of plots when it has its own roster of characters and ideas to build. While all of these arguments are legitimate points of view, there is another stance, one that looks more for what the benefits of bringing someone like Lando into the Rebels cast, whether for a one-off appearance or for a recurring role, would be.

Cameo appearances like Lando’s or Yoda’s do have other merits within the show itself beyond simple publicity. Rebels is a small and focused show at its core, but giving us a glance of what movie characters are doing before or after we knew them makes the setting for the show a prequel and sequel all at once. Luminara is in rather grim shape after the fall of the Republic, for instance, while Lando is still working as a smuggler and still working on perfecting all of the smoothness he would display in The Empire Strikes Back and beyond. Giving the show context by using existing characters as a reference point is a good way to solidify the show’s place in the timeline of the Star Wars universe, as well as showing what those characters were like at a time we are not accustomed to seeing them. 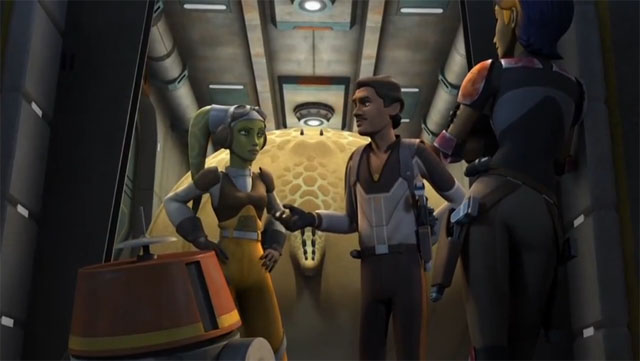 However, the real boon to the show by bringing in Lando and Yoda and the rest is to give the new characters, Hera, Ezra, Sabine and the others, a known personality to bounce off of. Just as Yoda’s interactions with Kanan and Ezra in “Path of the Jedi” challenged their assumptions about their own motivations and ultimately pushed them both further, Lando challenges Hera’s leadership when his sweet talk and hare-brained schemes threaten to divide the crew, causing her to reassert her own command. Though Zeb, Ezra, Sabine and Kanan all get their own little moments with Lando, and Chopper is the most cat-like he’s been in the entire series to this point as he preens for the one person who flatters him, the impetus is on Hera to keep them working together (and from killing Lando in the process).

Hera is the member of the Ghost’s crew who has received the least development to this point. She is the team mom, the one urging the others forward and smoothing the rough edges, keeping them all pointed toward an ultimate goal (even if she is not always clear about the goal they have in mind). To this point, however, we have only had glimpses of just how skilled and competent she is, and not just behind the controls of the Ghost. While she may not be a Jedi or Mandalorian, that does not mean she is helpless or cannot fend for herself, far from it in fact. Her escape from the crime lord’s ship is handled so deftly one might think she had done it before. She also shows street-smarts and ruthless business savvy, seeing through Lando’s smooth talk and negotiating a settlement with him that, while not everything they had hoped, was still better than nothing, and allowed the two parties to depart as acquaintances, instead of enemies.

Cameos can become tired if they happen too often or too intrusively. But Rebels has shown how to do it right, despite having two episodes keying on cameo appearances happen back to back. By keeping the onus of the episodes on the show’s main cast, and letting the established characters play a supporting role, it allows both to shine. Developing a member of the ongoing cast is where Rebels’ bread and butter is, and making the predicator of some of that development an old friend of the audience’s gives their appearance more weight than a simple wave-and-walk cameo. While having more cameos is not necessarily a good thing, at least the past two episodes have shown that Rebels is making an effort to make them fit into their larger storytelling whole, giving them purpose beyond mere fanservice.

One thought to “Bringing Out the Best: Cameos for Character Development”