I suppose I could blame Cam Kennedy; after all, whatever else he might be accused of, few would disagree that the man nailed the art of drawing Star Destroyers and, perhaps more importantly, the art of drawing Darth Vader. Vader is one of Star Wars’ iconic characters but is deceptively difficult to nail. An example of this can be seen in Vader’s Quest, the story has art by Sir Dave Gibbons. Must be great, yes? There’s certainly nothing wrong with it technically, but Gibbon’s Vader does not look quite right, there’s something off. More recently I get the same sense from John Cassaday’s Vader, but not Salvador Larroca’s work in the companion title.

So if I were to give out a Darth Vader Art Award, who would be in the running and who would win?

A legend of comic art, Williamson’s contribution to SW was huge. He provided art for both The Empire Strikes Back and Return of the Jedi adaptations and did a brilliant newspaper strip with Archie Goodwin after that until 1984. The re-issues Marvel are doing, with recoloured art, of the movie adaptations should show off his art. His cover for Classic Star Wars #3, Vader looming over a starfield, with the Executor under construction is an excellent composition. The way he depicts Vader is one that communicates power and cunning and an absolute sense of confidence, with a measure of pettiness as he chokes officers for failure. 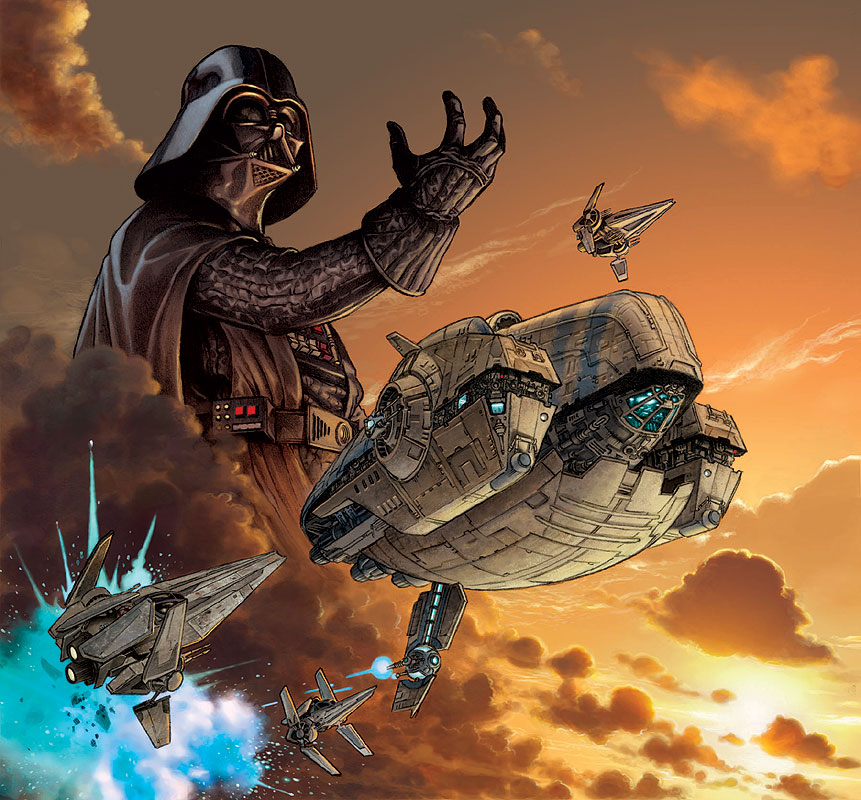 That guy? The guy who took ages to do the Dark Times issues? Who gifted it a permanent reputation for being late and delayed? Yeah, that guy, because when the issue turned up, it was nothing short of stunning – up to the point of rendering the delay understandable and even justifiable. For instance you have a man in a mask, he tends to be laconic, not at all chatty and very not in favour of displaying his feelings.

Nonetheless, the story requires that Vader be shown as uncertain and hesitant, how is that effect to be achieved by purely visual means? Somehow Wheatley nails it, he works an artistic magic to give us a truly ambivalent Vader, with the ambivalence flowing from the Empire’s practicing of slavery. The script is excellently sparse, but that only makes the artist’s job so much harder – yet Wheatley nails it with ease.

Better known for his other SW work on titles such as Knights of the Old Republic, Ching nevertheless proves quality beats quantity. As part of the Empire series he provided art for two complete tales, one by Ron Marz and one by John Jackson Miller.

Both are dark affairs, in part due to Ching’s art. Ching’s Vader dominates the story, all that happens is in response to his actions or the lack thereof. The sense the reader gets from Ching’s Vader is of darkness and lethality in equal amounts.

Frankly, Alessio has to be in the running. Oh but he only did one story you say?

True, but when it’s a story like Darth Vader and the Ghost Prison, only one is needed. There was a tendency for writers to treat Vader in the immediate aftermath of Revenge of the Sith as an impaired and immobile threat. This story went contra-flow to that, with a scarily impressive and very active Vader. It owes much to Alessio’s art for generating that impression so effectively. 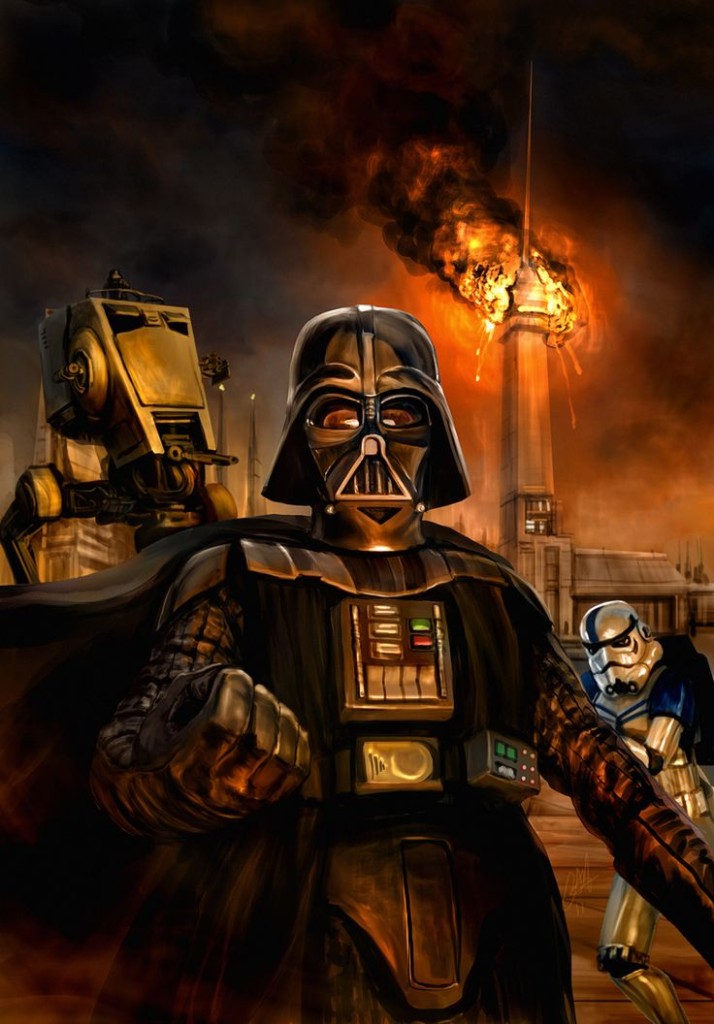 “Storm’s coming” – that’s what Scalf’s Vader is. Like Alessio and Ching, Scaif has only done a small amount of Vader art but what he has done has been quite wonderful. Showing exactly what painted art can do, Scalf’s Vader is a dark force of nature that obliterates everything it fixates on.

However as Purge: The Hidden Blade demonstrates, at this point, Vader is not yet a strategic thinker, something the Emperor berates him for at length. Painted art is deceptive, it looks great but it has limitations. Conveying movement and fluidity of action is one of them.

Fortunately Scalf is aware of this and gives a lesson in how to do it with a well-depicted lightsaber duel. No prizes for guessing who wins it though!

Too early? He’s only done one issue after all, hasn’t he? Yeah, but if it’s good enough for Scalf, then Larroca qualifies on the same basis! 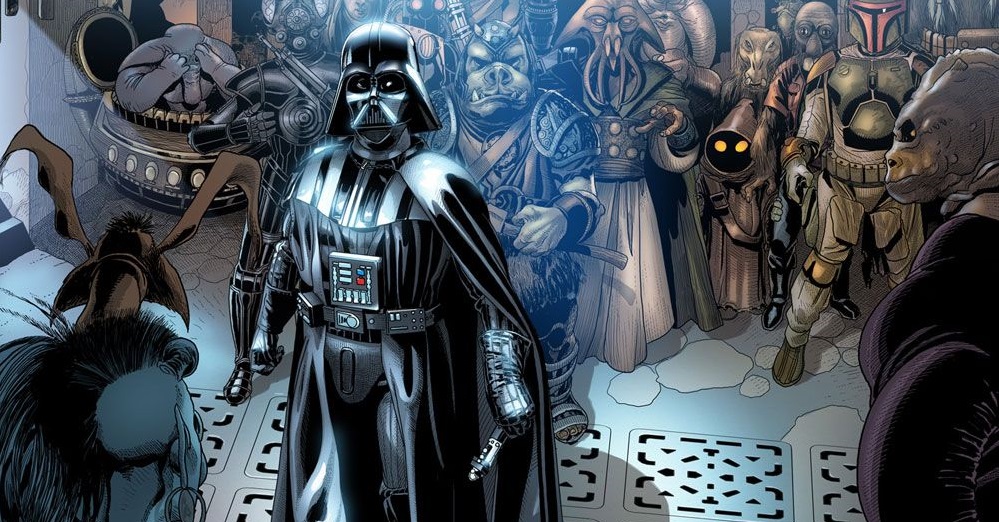 What is notable from the above image from Darth Vader #1 is that Vader isn’t in the shadows, he’s in a spotlight! Now that brings a whole host of problems for an artist, light and shadow effects, which will change with position too.

The Award for Darth Vader Art goes to….

At this point I feel I should point out the obvious – this is neither a comprehensive nor objective listing of every artist who ever drew Darth Vader in a comic, it’s rather my top Vader artists, yours may vary. Nonetheless there is a mix of methods, traditional penciling and digital art along with painted methods. Each has its strengths and weaknesses with unique selling points. Each visual portrait has been excellent, so is there any real way to award one more than the others? Objectively? 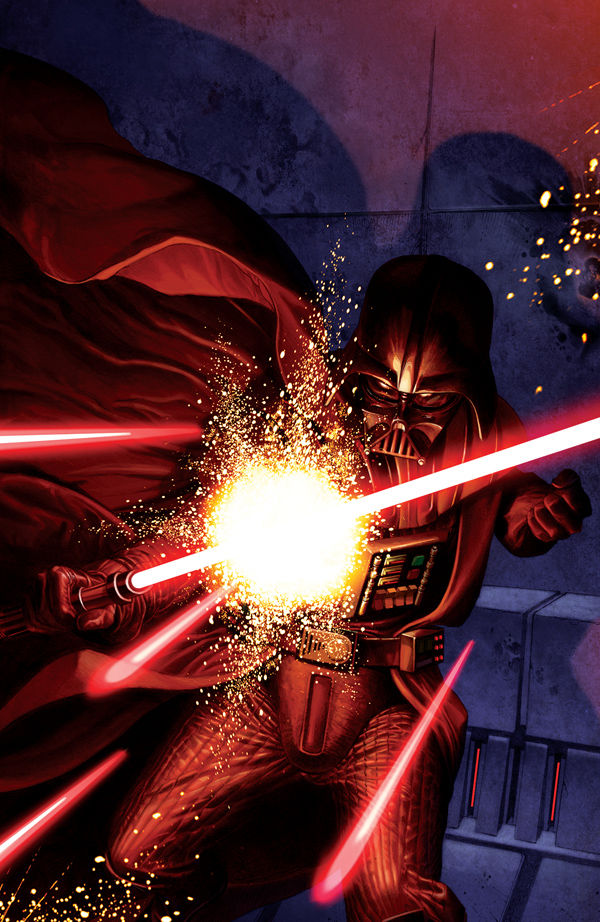 Likely not, but subjectively, most certainly.

Across the two decades I’ve read SW comics, it was Al Williamson’s art that has set the standard. Cam Kennedy’s work was great, but its strength was more orientated towards technology and places than people, Williamson just covers all of them with equal excellence. Nonetheless, it is not Williamson I would award the Darth Vader Art award to!

The honour would go to Doug Wheatley! Why? Because Wheatley’s art meets the standards established by Williamson and then goes further. When you know exactly how Anakin Skywalker became Darth Vader, when you have watched a man self-destruct his life, betraying and killing his friends and wife in the process, only contempt remains. Yet somehow, in the inaugural arc of Dark Times, Wheatley enables us to feel something other than contempt as Vader beholds the Empire enslaving the galactic populace! Vader is still a total bastard, a killing machine that no one walks away from, but Wheatley manages to bring other aspects forward without weakening that. It’s a remarkable balancing act, more so for being achieved by visual means.

One thought to “The Darth Vader Art Award”