We left the Legends universe in a rather unique spot. Much of the timeline of the GFFA had been filled in, and though there were still spaces to tell new stories, more of the universe was defined than many of us had perhaps hoped. Now that we are seeing new Star Wars publishing, in an era that had largely been untouched by the previous Expanded Universe, we can’t forget about the existence of Legends or its relevance. It might not be the current canon of Star Wars, but it’s still a part of 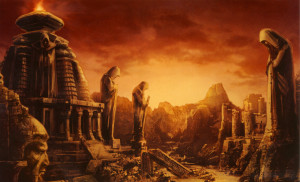 the framework of the universe. Much like ancient ruins (abandoned Sith tombs, anyone?), Legends has a great many of the answers and ideas we need for the next generation of Star Wars literature. Maybe even a Force-ghost or two.

In short, where did we leave Legends? As one reasonably complete story, to be honest. There are many time gaps still that could easily be filled in by other stories. Some of the earliest works do not make sense in the larger timeline simply because we didn’t have important pieces of the story. Nonetheless, there is a story that flows well together and allows for many new stories to be formed. We have all of the information right in front of us, and we can trace the development of Legends from its earliest days right up to July of 2013. We can even see where Legends might have gone if it hadn’t been decanonized.

Perhaps the best way to introduce people new to Star Wars literature is to see Legends as something of an archaeological site. The universe is complete and doesn’t have anything left to add, to the best of our knowledge. Especially in terms of post-Return of the Jedi literature, there are neat and convenient bookends and several different ways to read the books. Regardless of everyone’s feelings of the quality of anything that happened post-Vector Prime, there is still a plot (mostly) and it neatly ends with Crucible. There was certainly space to tell another story, but if nothing more resulted from SW literature, it still made for a complete story. This is the first major point of Legends: it fits neatly as an archaeological site. There is a beginning, middle, and end, and each part neatly fits together and shows its influence on what came afterwards.

For better or worse, Legends was not written in in-universe chronological order. I’d actually argue that this is for the best; having the SW universe constructed out of order does work in the bigger picture, and also leaves room for new stories in unlikely places. We also have to realize that the in-universe chronological order is not the best way to view Legends if we’re seeing it as kind of a story of where the SW universe has been, and where it could go in the future. For that purpose (which is kind of what we’re looking for as an archaeological site), then it’s best to think about how the books were published. They start at the most logical place- soon after the Battle of Endor- and fill in other spaces as stories developed and fed off of each other.

In my heart and soul, I’m a post-ROTJ EU fan. I was brought in by Jedi Search, and the Bantam era of the EU was the thing that really got me hooked. So much of what I’m waiting for in current SW publishing is post-ROTJ stories. The foundation of the EU, thematically, is the earliest chronological part of it, and all of the odd plot holes and strange comments about possible things that may have happened before A New Hope? It all makes reasonable sense in context. Think of it- a galaxy recovering from a civil war, and a totalitarian government that’s shown complete willingness to alter history to suit its ends? Of course we aren’t sure what happened twenty or thirty or forty years ago unless you experiences those events firsthand and didn’t get completely swept up by the Imperial propaganda. Even with reasonable explanation for some of the strangeness that is the early EU, it set so much important foundation for later EU that we can’t just simply dismiss it as silly. Remember, there will come a day in SW chronology where Rebels and A New Dawn are considered kind of weird because they were the first things that the new canon put out.

The place of the Bantam EU as the groundwork for the rest of the EU and even the new canon is vital. You can’t consider Legends as an archaeological site without acknowledging the foundation. From in-universe chronology, that foundation is set so far back that it barely means anything to the modern SW universe. Yes, the origins of the Jedi and Sith matter, but twenty-five thousand years is such a long time. It’s so hard to look at Legends’ in-universe chronology just because of the vasts amounts of time, and using out-of-universe chronology makes for a more clear path through the stories. 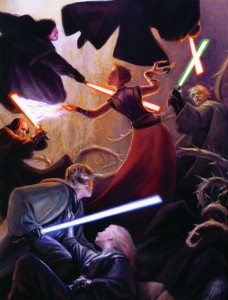 For all that Crucible is a controversial book, it works well as a bookend for Legends. Having a place to end the Legends-verse is important; with Star Wars being such a complex and lengthy story, it is difficult to know where to end it. Sooner or later, our favorite characters will no longer have a place in the galaxy, and with Crucible ending with Han, Luke, and Leia realizing this, it is the perfect setting to either continue Legends with the next generation or to end it as it stood. Best of all, Crucible is set so far from Legacy that there is plenty of space to tell new stories; if Crucible weren’t the end, there would be lots of space to tell more stories without intruding upon either Crucible or Legacy.

Another thing that Crucible really did right was bringing in a plot thread that was straight from Clone Wars. The Mortis plot arc, the mention of the Ones- yes, it’s another of the controversial parts of Crucible. But its function of tying together two separate eras of Star Wars history right at the oft-considered nadir of the EU? This is a valuable lesson that needs to be continued throughout new work. Star Wars may be a vast universe, but all of it has to be pulled together. Old plots and characters have a habit of turning up again, even the obscure ones. Crucible did one at least small thing right. I’d also argue that the breadth of EU that followed the full release of the prequels allowed for better quality work in all eras, and this is one example. Having the full story (and therefore the Old Republic not being off-limits as much) allowed for more plot development regardless of when it would be, and more tying in of eras. It might not have been done as well as it could have been, but seeing the chronology tied together is important for the sake of continuity.

There really was no other place to end the post-ROTJ EU other than Crucible. For all that half the fandom hates the book and the way it approached things, there were no other good spots to stop storytelling. If we’d gone on in that same timeline, there were a few major problems. It wouldn’t have been impossible, but it made more sense in the long run to just end it there. Sword of the Jedi would have had to begin a totally new era, bring in new characters, and find new ways to continue the tales of Star Wars without relying on the major characters that had dominated so much publishing. In fact, the original framework was so good that getting away from it was proving impossible. Legacy succeeded simply because it was so far outside of the normal timeline that we didn’t know a lot of things for certain, and it was a great way to take SW publishing in a completely different direction while still leaving room for more stories in other eras that were currently being worked on.

Part of an archaeological site is making the framework for what comes after. There are all sorts of legitimate criticisms of the old EU. It was often disjointed The stories were of varying quality. Individual authors’ pet projects may not have jived with the fandom or the overall feel of the stories. Some characters were written in ways that ultimately didn’t make sense. Plots went strange especially near the end. But for all that sometimes things didn’t work out, sometimes they worked out in ways better than we expected. Watching a civilization decay and crumble provides lessons for the ones who come after, and now we are looking back on our foundations in this fandom. Are we going to learn from some of those mistakes?

But really, what would Star Wars be without the mistakes. Remember that we aren’t seeking a universe that’s perfect, where everything makes sense and everything flows neatly. Let’s go back to the very word used for the EU now: Legends. Legends are the sort of thing told and retold, with some grain of truth, often different depending on just who you ask. They are often retold in different forms over the years, twisted by many to suit their own aims, and turned into inspiration for those who need it. Legends aren’t set in stone, and aren’t always resolved neatly. Best of all, if they don’t always make sense, that’s considered fine. We have a glorious archaeological record in the GFFA, and all the new EU can do is embrace it. There’s nothing wrong with acknowledging mistakes and silliness and things that could have been done better; in fact, doing so will improve what comes after. We have a complete story of where we’ve been at our fingertips. And we have a great story to reconstruct also. Let’s enjoy the ride.