There is no point to underselling just how important Darth Vader has been and is to the Star Wars franchise. He gave fans someone to boo (or cheer for), an iconic villain who is instantly recognizable, formidable, effective and intimidating. Anakin Skywalker’s past gives him backstory and depth, but it is Vader, with his raspy automated breathing, melodramatic deeper-than-deep voice, and grotesque-like helmeted visage that is the face of a franchise and one of the most venerated film characters of a generation. He is the third greatest cinema villain of all time according to the American Film Institute, behind only Hannibal Lecter and Norman Bates. It is small wonder that rumors about a film or project revolving around Vader have been swirling ever since Disney purchased Lucasfilm. When you have a character with that sort of impact, reputation and familiarity, not using them in some way would be far crazier than leaving them be.

While the prospect of a Vader-centric spin-off film is neither here nor there, using him in novels and comics is far from forbidden now and was hardly restricted before (unless you wanted to bring him back to life). Before the prequel trilogy, Vader was an indomitable force who could not be corrupted, turned aside or defeated in battle, the Empire’s foremost military commander. After his past as Skywalker came into better light, searching through his inner space and figuring out his thoughts and feelings became more of the norm, while still leaving him a formidable and deadly martial threat. But which of his appearances were the best (outside of those on film, of course)?

Just a note here, this will be far from a comprehensive list. There are other stories that might be worthy to join them, or stories that are on this list whose presence a reader may disagree with. Those readers are free to make their own lists to their own criteria. Most of these are whatever the author could think of off the top of his head or with a few minutes of glancing over a bookshelf. Darth Vader has appeared in dozens of stories over the years, and cataloging them all by subjective quality of characterization would be a rather exhaustive exercise. Consider this list a sampling of some of what the Expanded Universe has to offer in the ways of the Dark Lord. 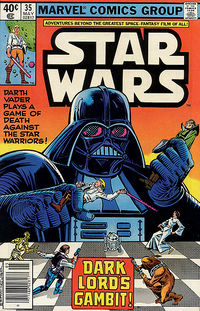 Darth Vader was the main villain at the EU’s genesis between A New Hope and The Empire Strikes Back, taking a direct role in hunting the Kyber Crystal and dueling both Luke and Leia in Splinter of the Mind’s Eye. But it was in the Archie Goodwin-led Marvel comics, where editorial mandate prevented him from directly confronting or fighting much of the main cast, where Vader made his greatest impact early on. The Marvel writers turned him into a mastermind, plotting out the downfall of both the Rebellion and his own political rivals like Baron Tagge, and often thwarted and defeated them without ever drawing his lightsaber. The comic cover showing him playing a game of chess with our heroes as the playing pieces, homage to a classic Fantastic Four cover with Doctor Doom in Vader’s place, illustrates this perfectly.

The ongoing timeline of the early Bantam era meant that most stories then were Vader-less, the focus more on the victorious heroes than their vanquished opponents. It was not until Steve Perry’s Shadows of the Empire when Vader was again able to take the stage, a side antagonist with Prince Xizor serving as the focus of the Big Three plus Dash’s heroic efforts. As in the Marvel comics, Vader maneuvered against both the rebellion and Xizor, showing a deftness with politics that rivaled his martial ability, even if he disdained having to dance around the point of an argument. Though not the book’s main villain by any means, his presence and threat is felt through the whole book, and in the end, he saw the end of the Falleen prince, the destruction of much of Black Sun, and ensured his son would live to fight (or be turned to the dark side) another day.

We have to skip a few years to get to the next story on the list. While Vader had roles in a few stories and media after Shadows of the Empire, the focus fell on the New Jedi Order era and tie-ins to the prequel films. Dark Horse’s Star Wars: Empire is a notable example from this time, being unable to fully capitalize on the prequels due to being started between Attack of the Clones and Revenge of the Sith. James Luceno’s Dark Lord: The Rise of Darth Vader was the best the prequel era produced, focused on the days and weeks immediately following Vader’s rebirth and his change from Anakin Skywalker to the Sith Lord we all knew. It was a more emotional Vader than we were used to, but he was still ruthless, and the seeds of the villain he would become later in the timeline were sown.

On the video game front, we had The Force Unleashed games, which were (and still are) divisive. Is Vader weak because beating him is possible as a part of the game, or is he strong due to his Machiavellian manipulation of Starkiller and the sheer difficulty of his final boss form? Was his betraying the apprentice the plan all along, or did he only go with it out of fear that the Emperor was still too strong to overthrow? The second game did give Vader one of his more elaborate plans since Shadows of the Empire, with wheels inside of wheels, ensuring that no matter how many layers the Rebellion and clone of his former apprentice dug through, he always had a way to emerge on top. 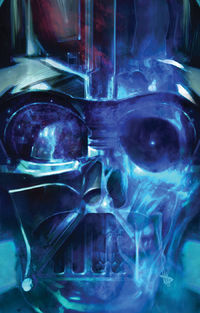 Dark Horse got in on the party in the post-RotS era first with their series Purge and then Darth Vader and the (Something), the best of which was Darth Vader and the Ghost Prison. The two comics are very different in their portrayals, with Purge focused on Vader’s animalistic hatred of the Jedi in the early days of the Empire, while Ghost Prison showcases Vader’s cold, impersonal determination and complete lack of empathy. Both tend toward the more simple portrayal of Vader as a juggernaut, unstoppable provided he is pointed in the right direction, without much cunning but fully displaying the power granted by the dark side.

The twilight of the Legends era gave us Michael Reaves’ Coruscant Nights books, where Vader is a constant hovering threat who directly confronts the heroes only a handful of times, but it is not until The Last Jedi where he takes a more direct hand in the story. Vader’s portrayal in this book is felt more by the effects he has on other characters, including driving a Jedi to the dark side just so he has a prayer of defeating him. Vader’s invincibility is again on display, but even more so is his ability to layer dangers upon dangers in front of the heroes while staying always one step directly behind them and never turning aside, meaning that even if they avoid his direct wrath, they spend most of the book running in abject fear.

Which story is best comes down to which Vader one prefers: the plotting, scheming, more Machiavellian Vader of the early EU, or the more direct, hands-on and brutal Vader of the prequel era, or perhaps the few stories that tried to meld the two after the films had wrapped. With a recurring villainous role in Marvel’s new ongoing comic, a self-titled comic all his own, a co-starring role in the upcoming Lords of the Sith novel and appearances in Rebels hovering on the horizon, Vader is being brought to the fore in a big way in the Disney era. He (or at least part of him) is even rumored to appear in The Force Awakens, somehow. While the old EU did not always handle Vader well (that’s a different article altogether), there were enough classic stories of villainy from our favorite Dark Lord of the Sith to more than make his mark beyond his appearance on film.