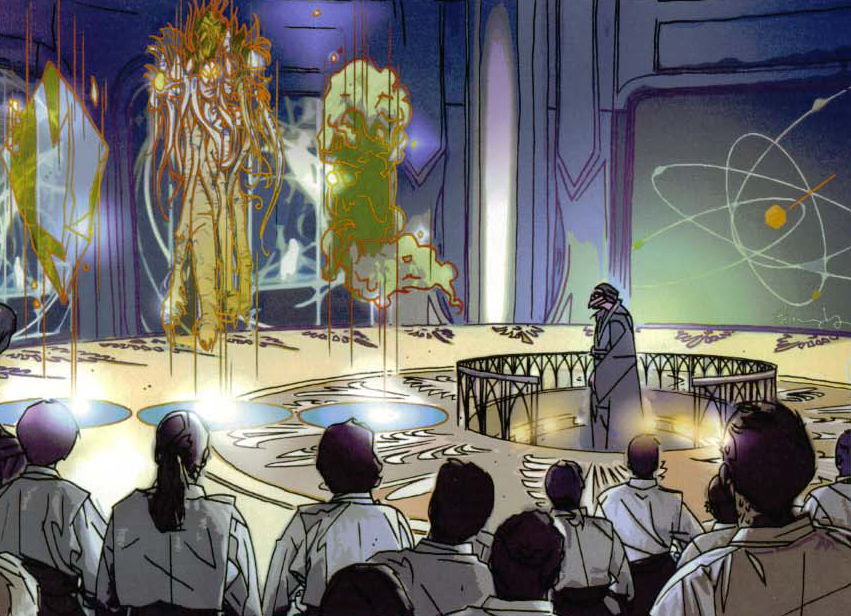 The Force is that mystical life force, the thing that surrounds us and binds us together. It operates like a sixth sense and seems to have a will of its own, grants supernatural powers, and can be tapped into by nearly every sentient species that exists. The Force itself also functions as a character. It’s kind of a centerpiece of a lot of Jedi- and Sith-focused stories, to the point that it can almost be considered an independent party on its own. The nature of the Force has been pondered over the years, its purpose varies depending on how you use it, but it very much is the focal point of so many tales. When bringing balance to the Force is a main objective of the OT, it clearly states that this weird life energy is something that the galaxy just can’t live without.

Remembering that the Force is entirely a neutral party makes it all the more interesting as the wild card and primary influence of the Star Wars universe. The Force doesn’t really have an agenda or allegiance, it can’t be swayed to one side or another, and though one side may dominate at different times, the Force itself is still there. Making that distinction matters- we see plenty of instances where either Jedi or Sith are mostly in charge of the galaxy, to the point that they believe the other to be extinct. There are also plenty of smaller Force-using groups, as well as individuals who may not be aware of their own power. The multifaceted nature of Force-users, running the gamut from good to evil and back again, gives life to a supernatural power that otherwise seems only held by two rather dogmatic organizations. The Force is a larger thing than what we often understand.

When looking at larger-scale events, accepting that there is a wild-card other party in the equation can make things make more sense. The Force seems to have a will of its own; many a Force-user has mentioned how they no longer believe in coincidence after seeing the Force in action. A sort of future-sight combined with unusual physical abilities makes Force-users seem superhuman already, but combining that with the Force nudging its users to certain things makes it seem like something of a character.

We really see the Force best developed as a character in the EU specifically because there are so few Force-users in the OT. Seeing new Force-users finding their own way in the absence of the former Jedi power structure creates a different perspective on the Force, one that’s important for shaping an entire galactic outlook. In a way, I think it’s best that we don’t know anything about how the Jedi of the Old Republic viewed the Force, nor much about the dark side, during the early EU. It gives the Force more time to develop itself as an important entity as the Jedi are rebuilding, as well as more space for Luke to learn more about just how vast the Force is. We run into a few other non-Jedi nor Sith Force-users in the early EU, and their different perspectives are the first hint that there is much more to the Force than even the early Jedi knew. The logical conclusion to this, of course, is the Yuuzhan Vong and their utter lack of the Force.

The problem that many of us had with the Yuuzhan Vong was the very fact that they didn’t exist in the Force.They were simply blank spots, disconcerting enough in itself, but even moreso in a universe where everything exists in the Force. Meeting a species that was completely outside of the Force, and then finding out that they’d been removed from it by their gods, was just weird. In general, one of the hallmarks of the NJO era was completely reshaping how we thought about the Star Wars universe, recreating important features, and bringing us to a deeper understanding of the Force fits in well with that. When your main interested party other than the characters suddenly seems to not fit into part of your main story, it raises questions. The question of “what is the place of the Force, and if the Force is life, why is there life without the Force” works well in a story that hinges upon weirdness. Nothing about the Yuuzhan Vong or their world seems to make sense. They even counter the Jedi- the most recognizable symbol of the GFFA. But in the end, they bring us a greater understanding of the Force, and the idea that perhaps no matter how much we know, there is something else left to learn.

The concept of the Living Force and the Unifying Force as different things is something that the GFFA could have easily expanded upon. It really establishes that the Force itself could be considered a character; it has a will of its own, and it’s an important enough force (pardon the pun) that it works often outside of what the mortal Force-users want. We start to find that there is more to the Force, more than just the old Jedi and Sith in the past, and that their discoveries are relevant still. For all that we make fun of Abeloth and everything that happened in Fate of the Jedi, it does give yet another spin on the Force. The discovery of the Ones reminds us again that the Force is much larger than we often think of it, and there are more ways to see the Force than just the Jedi and Sith views.

Telling the stories of Force-users can’t be done without elaborating on the Force itself, how it works, and how it influences their decisions. The Sith see themselves as the masters of the Force, while the Jedi accept relinquishing control to the Force. Other Force-users have different feelings about the role of the Force, but regardless of how they see it, the Force is by far the biggest influence on their lives. It is a backdrop to the universe, and possibly the most important unnamed character that we see. Regardless of which Star Wars story is told, we see the Force in every twist and turn. It is indeed the life-force behind everything and a viable character in its own right.

2 thoughts to “Dramatis Personae: The Force”