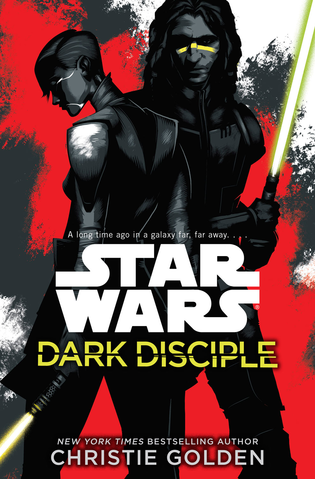 The Clone Wars dominated the landscape of Star Wars media for a good ten years or so, from the release of Attack of the Clones onward. The once-mysterious conflict referred to by Obi-Wan was fleshed out to an almost absurd extent. Once the Disney era of Star Wars publishing began, though, that focus shifted back toward the original trilogy era, leaving fans used to the focus on the prequels feeling left out. Then Dark Disciple was announced, and the combination of author and subject matter made most fans throw up their hands in either jubilation or utter despair. Christie Golden’s only contributions to Star Wars before now were in the Fate of the Jedi series, which has a rather mixed reputation among many readers. Not having read them myself, I sought to go into this book with as open a mind toward Golden as possible, since I try not to assign blame to authors for elements in books that are, often, works by committee to some degree.

What I did not expect from Dark Disciple was how much it resembles its other major building block (and something I do have familiarity with): scripts from Star Wars: The Clone Wars that never made it through production due to the show’s cancellation. Those who have watched TCW through its sixth and final season know what sort of antics the show could get up to. The show had no restraint when it came to what could appear on screen at any given time. Take “The Lawless” for instance, a fifth-season episode that wrapped up several recurring plot threads by having Darth Maul team up with Black Sun and the Pyke Syndicate to stage a coup on Mandalore, take over leadership of the Death Watch, then kill Obi-Wan Kenobi’s love interest in front of him before Maul and his brother Savage Oppress engage Darth Sidious in a duel to the death.

Continuity was always a secondary concern in TCW, behind things like visual intensity, emotional impact and metric tons of ambition. The issue was that the things they could do to shake up the status quo were limited. The show took some daring chances with characters when it could, while still being very restricted in what it was able to do much of the time. When around half of a show’s characters are destined to appear in a movie at a later canonical point, there is not much you can do to put them at risk and still have it feel genuinely suspenseful. It was not until the show’s fifth and sixth seasons (and any potential further stories from unaired scripts) when they had built up a roster of recurring original characters whose fates were open, that the status quo could really take a beating.

Dark Disciple fits right into that escalating shakedown of the show’s character roster. The main characters, Asajj Ventress and Quinlan Vos, both appeared in the show to varying degrees (the former much more than the latter), but both are fan favorite characters with devoted fanbases from the older Clone Wars multimedia project. Hence, the intense reactions when the book was announced. The last memories most had of TCW was the aforementioned cluster of fanfic-worthy insanity that is “The Lawless”, or Ahsoka’s becoming a paragon and pariah at the same time in “The Wrong Jedi”. The show was entirely unafraid to take rather heady risks the closer it got to the end of its run; having George Lucas in the story room seemed to give them an ambition to match whatever vision or whim he delivered. But those risks also run against fan expectations quite a lot of the time, to the point where TCW still has a rather rough reputation for squandering the potential in its characters and the arcs they were given. Ask any fan of Barriss Offee how they feel about the show, for instance.

Dark Disciple fits in the late-TCW mold almost perfectly, to the point where the book ebbs and flows in four-episode blocks, including a cliffhanger in the middle that would have meant waiting for the next season for the story’s conclusion. “Hearing” the voices of the principle characters in the dulcet tones provided by the TCW actors is ridiculously easy, as the characters themselves fit the molds exactly as they appeared on the show. Ventress is independent, sarcastic and deadly, Vos is more laid-back but still possessing an inner darkness brought on by the war, Obi-Wan is long-suffering and worried, using biting sardonic wit to cover for how badly he feels about things, etc. The character to suffer most from this is Count Dooku himself, whom TCW long ago relegated the role of a Saturday morning cartoon villain. He is certainly powerful and skilled, but his character lacks any sort of nuance or motivation beyond seeking the destruction of the Republic and Jedi Order.

Trying to fix holes within the narrative of the prequel films was a TCW hallmark, and something that this book also attempts. Namely, it tackles the increasingly pragmatic decision-making displayed by the Jedi Council in both Revenge of the Sith and in late TCW itself. The Council in this novel devises first to seek an immediate end to the war by assassinating Count Dooku, then, when the assassin they send fails and eventually falls to the dark side, vote for them to be executed rather than imprisoned. It’s clear from the outset that the Jedi are stepping dangerously close to the dark side with their actions, and while the events of the book pull them back, it’s a rather discouraging way to view the moral paragons of the Republic. 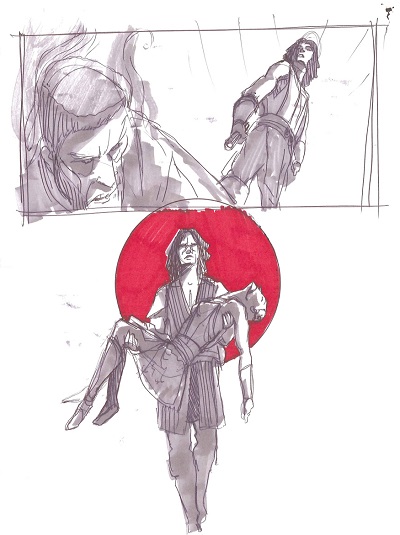 The themes of the book are light and darkness and striving to find a balance between them. The Jedi Council is one illustration, but both Vos and Ventress illustrate this even more clearly in their own arcs. Where the arcs take them, the journey that it embarks upon, is where the rub lies. Vos embarks on the entirety of his arc from the original Clone Wars series in the course of one book, using evil means for good ends and fighting the darkness from within, while Ventress has long ago given up being enslaved to anything (see my character breakdown on her arc through the show here) and that includes the dark side, instead using it as a tool to focus her own ice-cold rage into something useful. This book is completely unafraid of where it takes both characters, tangling them in intrigue, deception, betrayal, high-stakes espionage and, eventually, a damaged romance between two emotionally damaged people. The places they go may not be the ones everyone wanted them to go, but the utter conviction of the way the journey is handled makes for fascinating reading, and Golden does a rather good job of keeping it exciting and well-paced.

Without going into too much detail for those who have yet to read, there is a lot to dislike about Dark Disciple. As with the rest of TCW, it has uneven storytelling paired with overwrought dialogue, and broad characterizations that are at once instantly recognizable and infuriatingly two-dimensional. And as with a lot of TCW, the characters are made to serve the needs of the plot being told, rather than the plot being about the characters’ arcs. The two most developed characters in this book, Vos and Ventress, are also the ones who suffer the most from the needs of the plot to twist them this way and that for certain events to take place. Golden does her best to make the transitions and motivations natural, but she does not always make it work. Like watching a building collapse in slow motion, the book’s final few chapters are at once horrifying and fascinating. And the conclusion that occurs, the resolution of everything the book, and a good number of TCW episodes as well, built to, is finely wrought hubris.

Yet, there is something about the book that keeps the reader’s attention through to that point. Maybe it’s the macabre fascination at the novel’s head-scratching (or book-throwing) narrative choices; maybe its the memorable set pieces, including a confrontation between Ventress and Dooku at a formal event (he’s accepting a humanitarian award like the supervillain he is) that leads to a melee which would have been pure dynamite when realized on the screen; or maybe it’s trying to follow the ever-evolving relationship between Ventress and Vos, who always seem to wind up back together no matter what one does to the other. TCW always did a good job of keeping those invested in it around through all of its insane shenanigans, and Dark Disciple does likewise. Christie Golden translates that magnetism from screenplay to novel rather brilliantly, her prose fleshing out and supporting the story around the two characters she obviously has a lot of concern for. She is wholly invested in making their arcs and actions in this book worthy of the characters, and for the most part, she succeeded.

I certainly was not expecting everything this book delivered. I went in with expectations so low that you would need a microscope to see them, and came back rather pleasantly surprised. I enjoyed reading it, if only because by now I am used to reveling in the sort of antics that TCW often winds up performing. I enjoy episodes like “The Lawless” precisely because of their unpredictability, their willingness to be daring, their insanity. Once the show’s status quo began to unravel, nothing was off-limits. While I would have far preferred this book’s eight episodes actually be animated and aired, Christie Golden did a commendable job fleshing them out and keeping true to the daring and ambitious spirit of The Clone Wars‘ final few seasons. How that will strike other readers depends very much on how they view TCW, and how far down the rabbit hole they are willing to go.