So, once upon a time you watched a Star Wars movie. You got hooked and starting seeking other tales, books, comics, video games and time went by. Years later you’ve changed, as has SW, and new films are coming out, with their own spin and there was a reboot no less. Amid all of this, what’s an old fan to do? The answer is surprisingly simple – no matter what, you hold onto that which got you into the story in the first place, regardless of what that may be.

It can’t be that easy, right? No. For instance someone may think it a great idea to kill off characters like Chewbacca because no one was using him. Or that it’s a great idea to put an ex-Imperial with untreated psychotic and megalomaniacal tendencies in charge of the galaxy. Or that there must be one unchanging Jedi Order across millennia with no variation permitted. Any long-running franchise will throw up challenges to the perspective of the long-time fan, which they must decide how to respond to. Often people look at development X and conclude whatever drew them to the story is no longer in place and it’s time to go. Others seek to sideline and mitigate the effect of development X.

And then, of course, there are the new fans. The ones who’ve just found it and are full of bubbly enthusiasm and think it’s all wonderful and not at all cynical about crap story development or high-handed corporate moves. Still, they’ll learn better, won’t they? Really? A better question to ask is why should they do so at all? If you look at an enthusiastic post about SW and are cynical about it, then you ought to consider that the problem is with you! New fans are fun and they bring new insights, new perspectives – and part of being a long-time fan successfully is embracing this, not resisting it.

Another part of the art is being open to new authors and new styles, like Chuck Wendig! Who? What kind of a name is Chuck Wendig? Well, OK, if nothing else I suppose it stands out. Watching the ongoing online fiasco over Wendig’s writing style and what ‘makes’ people like or loathe it has been darkly amusing. Allegations of it being childish, or being insufficiently literary – whether a SW story would ever count as literature or want to do so are entirely separate debates – or just an insult to intelligence have been flying all over the place. New authors, like new fans, embody the truth that things will change and you can only control how you respond to them. Though, where new stories are concerned, there is the seductive lure of the ‘seen it all before’ viewpoint, that this story being done now was done before years back – but so much better. Was it? Are you sure? Or it a nostalgic memory trick?

One of the most destructive traps for any fan is that of requiring the story characters be in ‘jeopardy’. Now any well-told story will convince the reader of the plight its characters find themselves in, but what if those characters are known to be alive at a later chronological date? Surely, that kills all sense of tension? Not so. True, the story will have to work a bit harder to fool the reader but the reader must want to be fooled too. This is necessary to enjoying the story. The alternative is to have to locate stories at the furthest chronological point on the timeline because only then can things ‘happen’. The problem is that point, for now, is Episode VII and nothing else. With but one decision, the bulk of SW stories across multiple mediums are dismissed. It is also worth noting that this mania for always going forward played a large part in the reboot too.

Then there is the notion that a future war invalidates the victories of the previous one, yet the continuance of the story requires that there be future conflicts. Perhaps not a galaxy-spanning war again, but certainly conflicts and battles. In large part this tends to arise from an expectation that the heroes can change the galaxy substantially, when they can but only lead by example. The New Jedi Order saw a galactic invasion happen and the New Republic politicians give into their most base and selfish desires. Pretty, it wasn’t. Later, the Legacy comic series jumped a century ahead and controversy arose around the fact that there was a resurgent Empire and a new Sith Order. Will the same happen to Episode VII? I don’t think it should but it easily could. To be honest, this entire argument is one I have very little time for but it has appeared frequently in recent years. 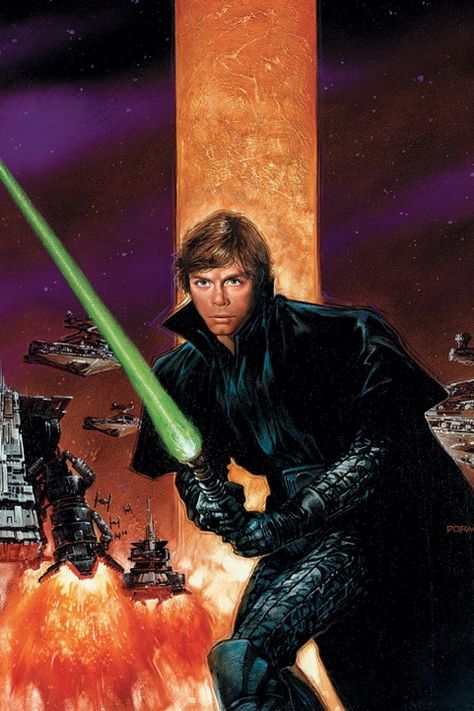 What should not change? In a sea of change you need some constancy and that’s those elements that drew you to SW in the first place. One of the strangest things about the infamous Dark Empire story is how quick some fans were to abandon Luke Skywalker and believe, because the story has said so, that he’d gone to the dark side. DE is written with a couple of key assumptions in mind: One, Luke Skywalker would never really go to the dark side; two, therefore it must be an inside job. It was never considered that these would not be in the reader perception, yet when looking at the way some responded to it that was clearly the case. If Han abandons Chewie, is he being a complete bastard to his closest friend or is he up to something? Chances are it’s the latter. Yet, where Luke’s concerned people think of him as Mr. Honesty, forgetting that he screwed over Jabba the Hutt!

Once that sense of confidence, optimism and hope in the characters – or in the creators who set up the stories – is lost, it is very hard to rebuild and many are the SW fans who have given into pessimism. Though, to be fair, SW itself certainly did that during 2005-2014, often quite frequently, often with Luke, Han and Leia. Nor did Lucas help much either, as SW underwent an identity crisis as to what kind of story it was and what it was about. If nothing else the Disney buy-out looks to have ended that, while the reboot has ripped the teeth out of those problem stories.

Is this the entirety of being a fan of a story for a long time? Probably not. I’m reasonably certain that there are traps I haven’t included, some blind alleys that are un-mapped and other techniques not mentioned. Nonetheless, I think this can work as a good initial guide, after all, it’s worked for me across the last twenty years!